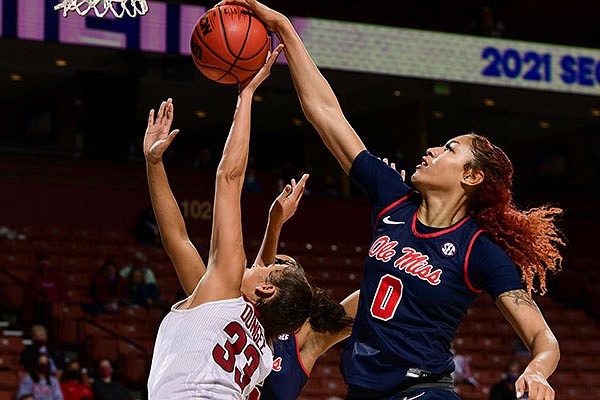 Ole Miss had no answer for Chelsea Dungee in its earlier game against the University of Arkansas. The Razorbacks could say the same about trying to stop the Rebels' Shakira Austin on Thursday night in the Southeastern Conference Tournament at Bon Secours Wellness Arena in Greenville, S.C.

Austin dominated inside the paint and the No. 11 seeded Rebels held down the high-powered Arkansas offense to upset the No. 13 Razorbacks 69-60 and avenge a regular-season loss two weeks ago.

The 6-5 junior scored a career-high 29 points and grabbed 13 rebounds and overwhelmed the cold-shooting Razorbacks.

The Rebels (11-10) stopped the Razorbacks' five-game winning streak and will now advance to take on Tennessee in the quarterfinals at 7:30 tonight.

Arkansas coach Mike Neighbors said Ole Miss turned the tables on the Razorbacks, who came in with an NCAA Tournament bid already in the bag. The Rebels were the team playing with a great hunger to extend their season.

"We ran into a team that was playing with a lot to play for and a ton of energy," said Neighbors, whose team was held to a season low for points. "I didn't do a very good job of preparing them for what it felt like. This group has been coming down here the last couple years with that type of hunger. Tonight it was against us and that's what happens in these things.

"Ole Miss was very, very focused. They made it hard on us to function offensively obviously with a seven-point first quarter and we were fighting uphill all night from that point on."

Austin, who transferred from Maryland, nearly matched the 17 points she scored in the earlier meeting in the first half. She finished with 16 first-half points on 5-of-8 shooting. Austin also chipped in three blocked shots and had three assists.

"It really made our driving lanes tough. We got a little frustrated at times and I thought early on we took a few shots that were a little uncharacteristic because we were a little bit frustrated. Their defense was unbelievable."

The Rebels got some breathing room thanks to an 8-0 run late. Austin's jumper gave Ole Miss a 65-55 lead with 3:43 left. But Dungee ended a scoring drought of more than four minutes with a 3-pointer from the wing. Arkansas misfired on two 3-point attempts to get closer and Ole Miss went on to the upset victory.

Destiny Slocum added 13 points and Amber Ramirez 10 for the Razorbacks.

Dungee said the Razorbacks' shots just weren't falling. That's a total opposite from Arkansas' regular-season finale in which it hit a SEC and program record 19 3-pointers in a 94-76 win over Alabama. The Razorbacks made just 7-of-31 threes against the Rebels.

"I wouldn't say couldn't find our rhythm," Slocum said. "We took great shots. I feel like we got really great shots. Tonight, they weren't falling.

"I can't really say much. I think we have a lot to work on, to grow from. I wouldn't say that's like something to define us from. We're gonna use it as fuel obviously."

The Rebels also enjoyed the advantage at the free-throw line, making 18 of 21. Arkansas, which has shot and made the most free throws of any team in the country this season, made 9 of 15.

Ole Miss led by as many as eight on Snudda Collins' 3-pointer midway through the third quarter, but Arkansas went on a 7-1 spurt to get within two. Slocum's 3-pointer at the third-quarter horn pulled the Razorbacks within 53-52.

Arkansas started an ice-cold 2-for-20 from the floor and trailed by as many as 10. The Rebels led 17-7 after a quarter. It was the lowest-scoring quarter for the Razorbacks of the season.

But Arkansas warmed up in the second quarter. The Razorbacks hit 7-of-10 shots on a 15-3 run to grab a 24-22 lead on Slocum's 3-pointer with 4:42 left in the first half. However, that would be the Razorbacks' only lead of the night.

Jacorriah Bracey drained a three to give the Rebels the lead back. Bracey's bucket began an 11-4 spurt to end the half -- including eight from Austin -- and led 33-28 at halftime.

Arkansas will now have to wait until Selection Monday on March 15 when the NCAA Tournament bids are handed out.