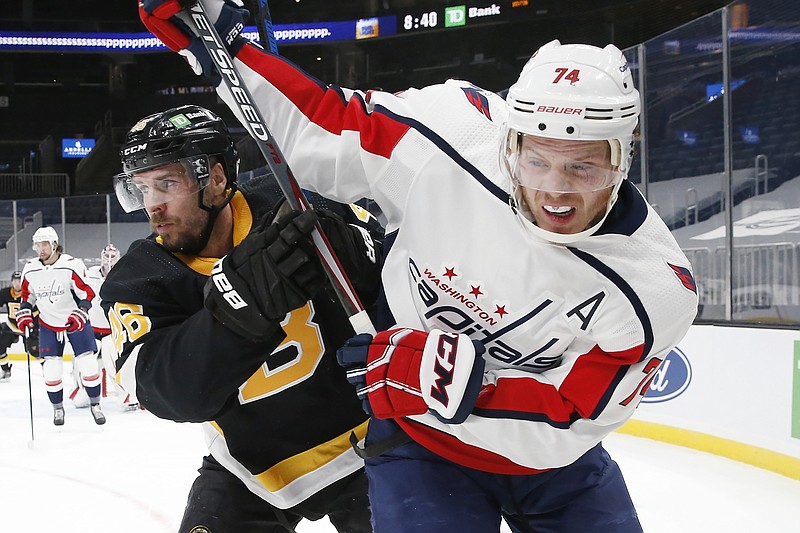 BOSTON -- Brad Marchand had two goals and an assist and the Boston Bruins responded to a head shot from Capitals forward Tom Wilson with a three-goal second period to beat Washington 5-1 on Friday night.

Two days after Alex Ovechkin slashed Trent Frederic in the groin, the game again took an ugly turn when Wilson smashed Brandon Carlo's head into the glass with 90 seconds left in the first period. Bruins coach Bruce Cassidy said Carlo left the arena in an ambulance and went to a hospital but could not confirm that it was a concussion.

Frederic and Jarred Tinordi fought Wilson in the game, but the real revenge was the scoring.

Frederic scored Boston's second goal -- the first after Wilson's hit -- and Patrice Bergeron had a goal and an assist for Boston. Nick Ritchie also scored, and Jaroslav Halak stopped 31 shots.

Nicklas Backstrom had his 700th career assist, setting up Jakub Vrana to spoil the shutout bid with six minutes left in the game. Vitek Vanacek stopped 14 of the 18 shots he faced before he was pulled with 4:17 left in the second period and the Capitals trailing 4-0; Ilya Samsonov made six saves on seven shots the rest of the way.

Carlo went down late in the first period after Wilson went hands-high to his head in the corner behind the Boston net. Carlo absorbed a cross-check from Vrana on his way to the ice and remained there for several minutes. No penalty was called.

SAN JOSE, Calif. -- Max Pacioretty scored his second goal of the game in overtime and Vegas recovered to win after allowing a bizarre tying goal late in the third period.

Pacioretty converted off a pass from Alex Pietrangelo to beat Devan Dubnyk 1:25 into overtime to end a wild game that gave Vegas a five-game winning streak.

The Sharks had tied the game with 1:07 left in regulation came after Brent Burns' clear attempt bounced toward goalie Oscar Dansk as Kevin Labanc came rushing toward him. Dansk tried to knock the puck away, but didn't make clean contact and it hit off Labanc's stick and went into the open net.

Reilly Smith and Chandler Stephenson also scored for Vegas. Dansk made 25 saves in his first start since 2019 and earned his first win since Oct. 27, 2017.

Brent Burns, Matt Nieto and Logan Couture also scored for the Sharks, who have dropped four of five to start their seven-game homestand.

CHICAGO -- Philipp Kurashev scored the only goal in a shootout in Chicago's victory over Tampa Bay.

Chicago improved to 4-1-1 in its past six games and snapped Tampa Bay's six-game winning streak. On Thursday night in the series opener, the Lightning won 3-2 in overtime on Alex Killorn's buzzer-beating goal.

DENVER -- Valeri Nichushkin scored his second goal of the game 2:45 into overtime, Philipp Grubauer made 26 saves and Colorado overcame a two-goal deficit to beat Anaheim.

Nichushkin circled around a defender and then slid a shot past goalie John Gibson.

Brandon Saad also scored for a Colorado team missing star player Nathan MacKinnon, who was a late scratch. MacKinnon left in the third period Wednesday night in San Jose after taking a hit to the head.

Adam Henrique and Jakob Silfverberg scored for Anaheim. The Ducks are 0-6-3 in their last nine.

Hoffman ripped a slap shot from the right faceoff circle past Cal Petersen to give the Blues their third straight victory. David Perron scored twice for St. Louis, tying it with 44 seconds left in regulation.

GLENDALE, Ariz. -- Mats Zuccarello had a goal and an assist, Kaapo Kahkonen stopped 24 shots and Minnesota jumped on Arizona early.

Zuccarello scored on Minnesota's second shot of the game, and Brad Hunt and Nick Bjugstad also had goals in the first period. Jordan Greenway scored early in the second period and had an assist for the Wild. Kevin Fiala also scored.