A year after pandemic, Oaklawn rolls out Rebel Saturday 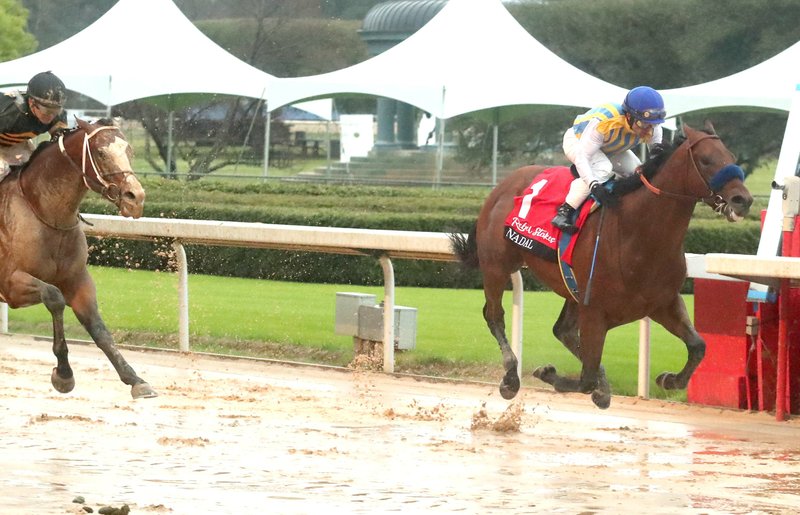 Jockey Joel Rosario and Nadal (1) pass the wire ahead of Excession (2) and jockey Tyler Baze to win the Rebel Stakes at Oaklawn Racing Casino Resort Saturday, March 14, 2020. - Photo by Richard Rasmussen of The Sentinel-Record

Rebel Saturday at Oaklawn has more bells and whistles than some April cards at the track. Call it a Racing Festival of the South preview.

Oaklawn's assurances of better times ahead during February's winter storm are coming to pass. A racing fan might need an umbrella at some point over the weekend, but with highs in the 70s what's not to like.

Five stakes speak to the quality of racing, which even by Oaklawn's standards is exemplary. With the largest mid-season purse increase in track history kicking in this week, eight of the 12 races carry $100,000 purses.

If you're keeping score at home, the total Oaklawn outlay Saturday is $2.79 million.

The 15-percent, across-the-board increase bumps top allowance purses to $110,000 and hikes maiden special weights to $93,000 and bottom-level races to $27,000. This at a track where the first $50,000 Arkansas Derby was cause for celebration but fears arose that Oaklawn might yield to pressure from gambling interests out of state rather than convert into a racetrack casino.

At what is now Oaklawn Racing Casino Resort, Rebel Saturday sets the stage for three $1 million races next month -- the Arkansas Derby on April 10 and the Apple Blossom Handicap and Oaklawn Handicap on April 17.

And, to think, this is the one-year remembrance (anniversary is too cheerful a word) of COVID-19 restrictions limiting attendance. Those remain in effect, and though shutting down eight days this year because of weather and tweaking a few things then, Oaklawn did not miss a day in the 57-day 2020 racing season, capping with the first May running of the Arkansas Derby on a card that generated $40 million in all-sources handle.

"It's been an interesting year to say the least," track President Louis Cella said in announcing the purse increase Tuesday, "but is very gratifying to announce this ... nearly a year after shutting the race meet and casino down to fans because of the pandemic.

"I wasn't sure we'd here get a couple weeks ago with all the bad winter weather, but our horsemen and fans are resilient. February ended with a tremendous weekend of racing (three graded stakes among six added-money events) and it was exciting to see fans back in the infield last week. I have no doubt the final eight weeks of racing are going to be exciting, especially with some of our marquee races still to come."

Two weeks after Essential Quality and Monomoy Girl splashed to victory over the track in seasonal debuts, a third 2020 Eclipse Award winner appears on Rebel Saturday. Whitmore launches his sixth year of local racing in the $200,000 Hot Springs, which he has won the last four years. For the first time, he races here as a champion, scoring a popular victory for trainer and co-owner Ron Moquett in the Breeders' Cup Sprint last November at Keeneland.

Hoping to extend local records in the Hot Springs and with a fourth victory in five runnings of the Count Fleet Sprint Handicap next month, Whitmore is one of four Grade 1 winners in action on Rebel Saturday.

The only horseman with more demands on his time than Moquett, who lives across from the track, may be Staton Flurry, who with his mother, Dorothy, operates a parking lot on the Central Avenue side of Oaklawn. Staton Flurry has circled this day on the racing calender for the return of filly Shedaresthedevil, who since winning the Grade 3 Honeybee locally in March topped out in the Grade 1 Kentucky Oaks in September at Churchill Downs

Main event, of course, is the Grade 2 $1 million Rebel, which brings out Grade 1 winner Get Her Number, who tries to match champion American Pharoah's race triumph of 2015, having scored a Santa Anita victory in a 2-year-old stake renamed after the sport's 12th Triple Crown winner.

Bob Baffert, who trained American Pharoah and won last year's Rebel and a division of the split Arkansas Derby with Nadal, is represented by Concert Tour. The Grade 2 winner has the same owners, Gary and Mary West, as the trainer's champion Game Winner, whose first defeat came in the 2019 Rebel.

After watching a stakes race honoring his 1980 Arkansas Derby and classic winner, Temperence Hill, Hot Springs lumberman John Ed Anthony seeks his fourth Rebel victory with Caddo River. The Hard Spun colt made a show of the Smarty Jones mile opening day, winning by 10 1/4 lengths with a Beyer Speed Figure of 92. He stretches out to a mile and sixteenth for trainer Brad Cox, who has Essential Quality and Mandaloun also looking ahead to the May 1 Kentucky Derby.

"He needs to run in a race with some points," Cox said of Caddo River, who scored 10 in the Smarty Jones and can earn 50 with a Rebel victory. Essential Quality and Mandaloun may go out of town for 100-point races, Cox said. With the Arkansas Derby a 100-point option, "Caddo River's the one that's going to have to step up in a points race and pick off some points."

Grade 2 winner Keepmeinmind, with 18 Derby points, makes his 3-year-old debut in the Rebel after trainer Robertino Diodoro passed on the Southwest for several reasons (more points, same distance -- need we say it, more money -- and, hopefully, a dry track).

Having lost twice to the champion in Kentucky and getting another look as a spectator in the Southwest, Diodoro calls Essential Quality a "very nice horse." Oaklawn's 2020 training champion, Diodoro elected not to ship his colt to Fair Grounds for the first 50-point prep, the Risen Star, won by Mandaloun.

"The way the track and the weather was, I'm kind of glad we didn't run," Diodoro said. "The track has taken a beating here the last couple of weeks. No one can stop Mother Nature."

Baffert, with a record seven Rebel victories, had Spielberg run second in the Southwest. He comes back with Concert Tour, who like Nadal won the San Vicente at Santa Anita before coming to Arkansas. A week after the trainer's Life Is Good won a 50-point prep (San Felipe) in California, Concert Tour makes his two-turn debut in the first points race for the 2-for-2 campaigner.

"The timing's right for this horse," Baffert said. "He's sort of on the same path as Nadal. It's all about timing. This race happened to come up perfect for him. So we'll stretch him out."

Fifty-cent pick-five wagers begin on the first and eighth races and pick-fours on races 2, 5 and 9. Each race offers a $1 daily double and 10-cent superfecta, and a rolling 50-cent pick-three starts with race 2.