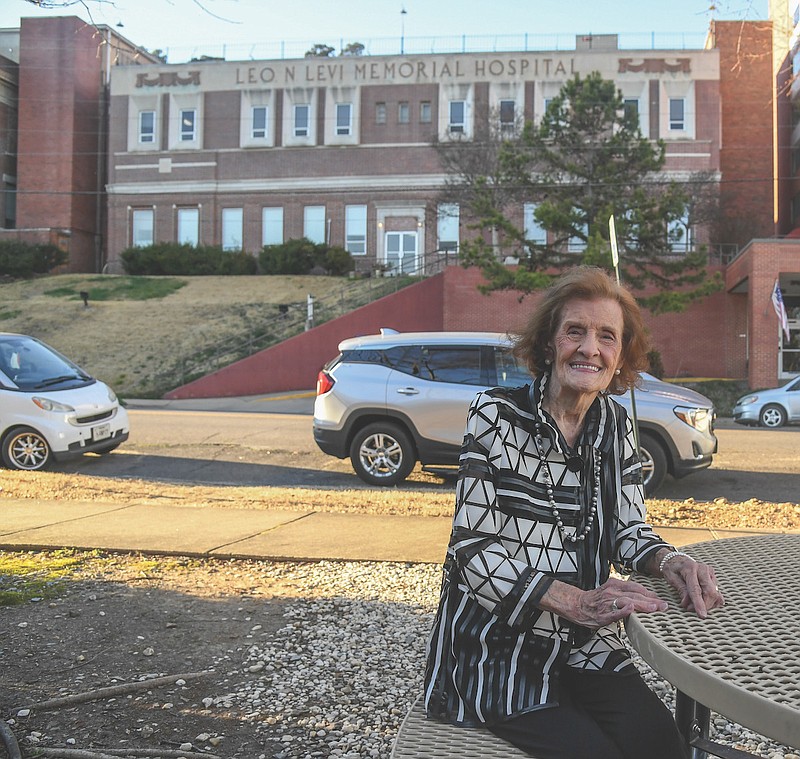 Mary Talley has her photo taken in front of the Levi Hospital on March 3, 2021.-Photo by Grace Brown of The Sentinel-Record

Mary Dell Robins Talley is the last living nurse from the Levi School of Nursing, and at 92 years old she talks as fondly of the nursing career she retired from 28 years ago as if it were yesterday.

"There was so much that we did, and laughed. The fun time of my life was at the Levi helping the patients and having fun," Talley said.

Her sweet sentiments to her time as a nurse at Levi are enriched by the fact that any nurse coming out of the Levi School of Nursing knew nursing was a labor of love due to the hard work and low pay. An excerpt from "Levi Arthritis Hospital: More Lasting Than Marble or Stone," by Dale E. Wagoner, gives a glimpse into what life was like for a nursing student at Levi:

"The hospital, in common with many hospitals at that time, relied heavily on its school of nursing for staffing. Today we tend to forget that the low cost of hospitalization in the early part of the Twentieth Century was made possible largely due to low labor costs. Hospitals are now and always have been, labor intensive industries. Originating with religious and charitable organizations, hospitals have traditionally maintained low wage scales.

"A school of nursing served two goals; training future staff and providing an ample (and energetic) labor pool with little cost to the institution. The Levi School of Nursing charged no tuition. Throughout most of its period of operation it paid a small stipend to the student nurse. One nurse who graduated in the Thirties recalls that the first-year students received $8 per month with three dollars withheld to reimburse the hospital for books and uniforms. There was the ever-present risk of having additional amounts withheld to pay for breakage, perhaps a thermometer or a hypodermic syringe. The second year the allowance went to $10 per month, and third year to $15, subject to essentially the same withholding."

Talley's foundation as a nurse created at Levi is plausible when one hears of the hard work she did in her 33-year career that she describes as rewarding.

After working at and graduating from Levi, she went on to work in Kansas City at a research center before moving back and working at the Montgomery County Health Unit in 1963.

Her son, Rob Talley, said that from 1963-1976, his mother was essentially the only health care in Montgomery County -- a task that required a hard worker, to say the least.

Talley said the most rewarding part was helping people, "from babies to elderly people," get healthy so they could help themselves.

Talley was born in 1928 in the Owley community south of Mount Ida as the only girl with five brothers, her son said. She graduated from Mount Ida in 1947 and her sister-in-law, Betty Fox Robins, was a student at Levi and signed her up before telling her. This led to Talley ironically just happening upon her nursing career.

"My sister-in-law was a nurse, so I had just graduated from school and came to Hot Springs to visit and she signed me up," she said. "I knew nothing about nursing, but it turned out to be the fun time of my life."

Once enrolled in Levi, she worked hard to stay.

"They lived on campus and were paid to work in hospital a small amount," her son said. "She loves to tell amounts and details, as well as the women who ran the program. ... Her parents gave her no money for school but did help out her brothers, which I guess was standard practice at the time."

When Talley began work at the Montgomery County Health Unit in 1963, she went on to head programs at the unit for communicable disease, maternity, immunizations, general health and home visits.

For 30 years at the health unit she sped to homes in snowstorms in the middle of the night, regularly made rounds to five different schools to give immunizations and helped give sexual education to prevent unsafe illegal abortions that were occurring. She describes her time at the health unit as "happy times; hard times."

"Well, you know, when the people need help you help them," Talley said.

"She was on call 24/7," her son said. "I remember many nights and weekends when she would get a call to go fix a catheter or change a dressing. People just had our home phone number and would call.

"Mother is also one of the last surviving health care professionals to have literally experienced the results of the history of vaccine. She worked with iron lung patients before the invention of the polio vaccine. One of her primary roles was not only giving the vaccinations but getting the information out to get people there. Betty Bumpers visited her health unit in an effort to get information to the public about the importance. She has been involved with every vaccine in history and loves to take on an anti-vaxxer."

Her son said he still gets messages from people whose lives his mother touched; from giving a simple vaccination to spreading necessary sexual education in the family planning department.

Since retiring in 1993 Talley spends time tending to her lawn, still weed trimming at 92, and visiting with her four grandchildren and 11 great-grandchildren.