Governor expects to lift mask mandate by end of month 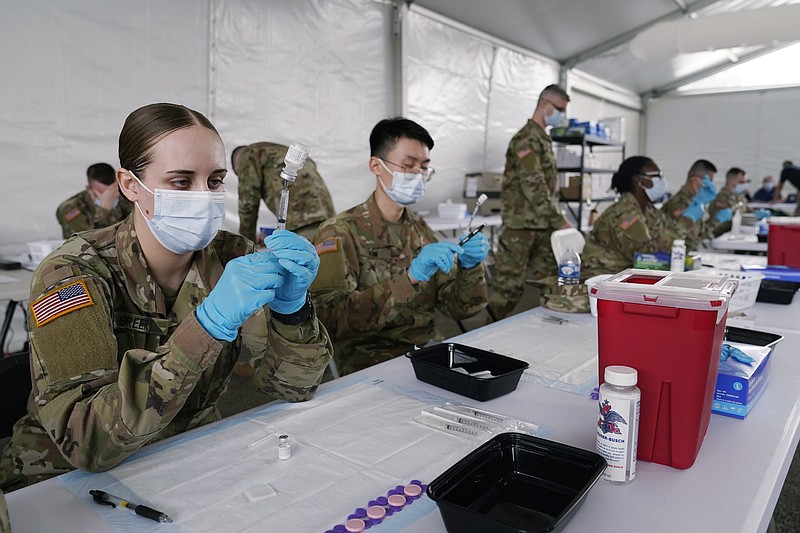 The Associated Press In this March 9 file photo, Army health specialists fill syringes with the Pfizer COVID-19 vaccine in Miami. Despite the clamor to speed up the U.S. vaccination drive against COVID-19, the first three months of the rollout suggest faster is not necessarily better.

LITTLE ROCK -- Arkansas Gov. Asa Hutchinson said Sunday that he believes his proposal to remove a mask mandate intended to slow the spread of the coronavirus will take place as planned at the end of the month.

On CNN's "State of the Union," Hutchinson said goals he announced in February to lift the mask mandate, which include a positivity rate below 10%, or fewer than 750 hospitalizations, are being met and he believes the mask requirement will be lifted.

"I set some goals. And we're making those goals. So, I expect that (mandate) to be lifted," Hutchinson said.

Hutchinson said he believes people will continue wearing masks when social distancing is not possible or they are otherwise at risk of virus exposure.

The state's positivity rate was 9% through Thursday, according to data from Johns Hopkins University and the Arkansas Department of Health on Sunday reported 192 people hospitalized due to the virus

Despite the clamor to speed up the U.S. vaccination drive against COVID-19 and get the country back to normal, the first three months of the rollout suggest faster is not necessarily better.

A surprising new analysis found that states such as South Carolina, Florida and Missouri that raced ahead of others to offer the vaccine to ever-larger groups of people have vaccinated smaller shares of their population than those that moved more slowly and methodically, such as Hawaii and Connecticut.

The explanation, as experts see it, is that the rapid expansion of eligibility caused a surge in demand too big for some states to handle and led to serious disarray. Vaccine supplies proved insufficient or unpredictable, websites crashed and phone lines became jammed, spreading confusion, frustration and resignation among many people.

"The infrastructure just wasn't ready. It kind of backfired," said Dr. Rebecca Wurtz, an infectious disease physician and health data specialist at the University of Minnesota's School of Public Health. She added: "In the rush to satisfy everyone, governors satisfied few and frustrated many."

The findings could contain an important go-slow lesson for the nation's governors, many of whom have announced dramatic expansions in their rollouts over the past few days after being challenged by President Joe Biden to make all adults eligible for vaccination by May 1.

"If you're more targeted and more focused, you can do a better job," said Sema Sgaier, executive director of Surgo Ventures, a nonprofit health-data organization that conducted the analysis in collaboration with The Associated Press. "You can open it up -- if you have set up the infrastructure to vaccinate all those people fast."

But the size of the eligible population was always within the control of state officials, who made widely varying decisions about how many people they invited to get in line when there wasn't enough vaccine to go around.

When the drive began, most states put health care workers and nursing home residents at the front of the line. In doing so, states were abiding by national recommendations from experts who also suggested doing everything possible to reach everyone in those two groups before moving on to the next categories.

But faced with political pressure and a clamor from the public, governors rushed ahead. Both the outgoing Trump administration and the incoming Biden team urged opening vaccinations to older Americans.

By late January, more than half the states had opened up to older adults -- some 75 and above, others 65 and up. That's when the real problems started.

South Carolina expanded eligibility to people in Steven Kite's age group Jan. 13. Kite, 71, immediately booked a vaccination at a hospital. But the next day, his appointment was canceled along with thousands of others because of a shortage of vaccine.

"It was frustrating at first," Kite said. After a week of uncertainty, he rescheduled. He and his wife are now vaccinated. "It ended up working out fine. I know they've had other problems. The delivery of the doses has been very unreliable."

In Missouri, big-city shortages sent vaccine seekers driving hundreds of miles to rural towns. Dr. Elizabeth Bergamini, a pediatrician in suburban St. Louis, drove about 30 people to often out-of-the way vaccination events after the state opened eligibility to those 65 and older Jan. 18 and then expanded further.

"We went from needing to vaccinate several hundred thousand people in the St. Louis area to an additional half-million people, but we still hadn't vaccinated that first group, so it has been this mad dash," Bergamini said. "It has just been a whole hot mess."

"It got a little chaotic," said Dr. Marcus Plescia, chief medical officer of the Association of State and Territorial Health Officials. "We created far more demand than there was supply. That stressed the system and that may have left the system less efficient."

Plescia said the analysis suggests that "a more methodical, measured, judicious, priority-based approach -- despite people's perception -- actually can be as efficient, or more efficient, than opening things up and making it available to more people."

In retrospect, health workers and nursing home residents were the easy groups to vaccinate. Doses could be delivered to them where they lived and worked.

"We knew where they were and we knew who they were," Wurtz said. As soon as states went beyond those populations, it got harder to find the right people. Nursing home residents live in nursing homes. People 65 and older live everywhere.

West Virginia bucked the trend with both high numbers of eligible residents and high vaccination rates in early March, but the state started slow and built its capacity before expanding eligibility.

Similarly, Alaska maintained a high vaccination rate with a smaller eligible population, then threw shots open to everyone 16 and older March 9. This big increase in eligible adults near the end of the period studied led the AP and Surgo Ventures to omit Alaska from the analysis.

The analysis found that as of March 10, Hawaii had the lowest percentage of its adult population eligible for vaccination, at about 26%. Yet Hawaii had administered 42,614 doses per 100,000 adults, the eighth-highest rate in the country.

Thirty percent of Connecticut's adult population was eligible as of the same date, and it had administered doses at the fourth-highest rate in the country.

In contrast, Missouri had the largest percentage of its adult population eligible at about 92%. Yet Missouri had dispensed 35,341 doses per 100,000 adults, ranking 41st among the states.

"This is a thorough analysis showing a clear association between breadth of eligibility and vaccination rates across states," said Dr. Mark McClellan, a former head of the Food and Drug Administration who was not involved in the new analysis but reviewed it for AP.

The better-performing states could be getting results by paying closer attention to vaccine supply, thoroughly vaccinating high-risk groups and then opening to additional categories more slowly as they wait for supplies to build, McClellan said.

What happens next will depend on how much states can improve their vaccine delivery systems and whether Americans remain eager for vaccination, even as the threat eases with more people protected and case numbers dropping.

"Have states used this time wisely and fruitfully to lay down the infrastructure needed to open it up to more people?" Sgaier asked. 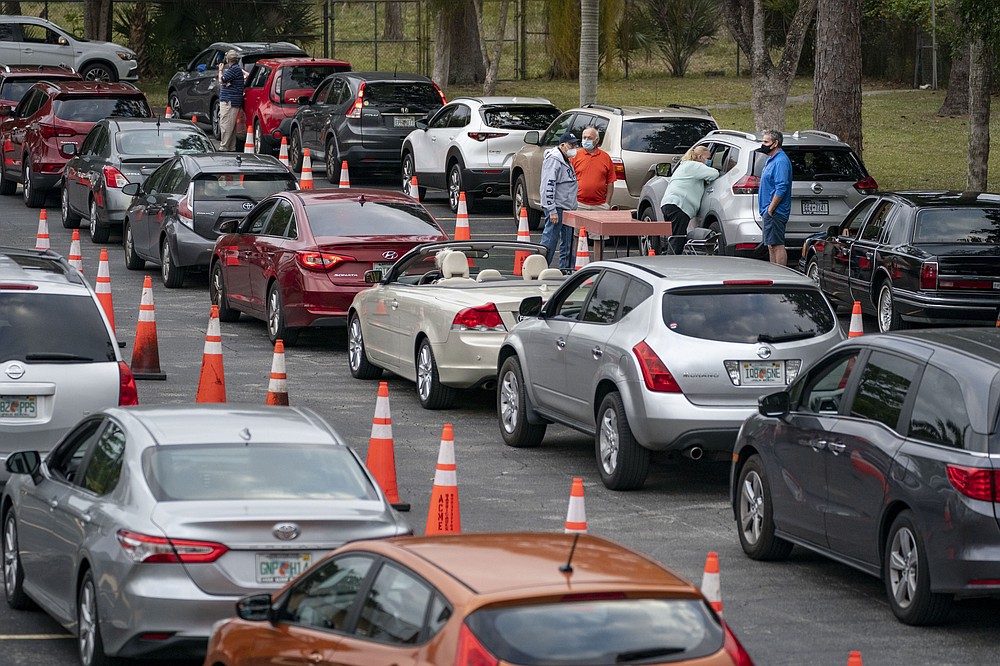 FILE - In this Monday, Jan. 11, 2021, file photo, Century Village residents wait before appointments are handed out for the COVID-19 vaccine in West Palm Beach, Fla. Despite the clamor to speed up the U.S. vaccination drive against COVID-19, the first three months of the rollout suggest faster is not necessarily better. (Greg Lovett/The Palm Beach Post via AP, File) 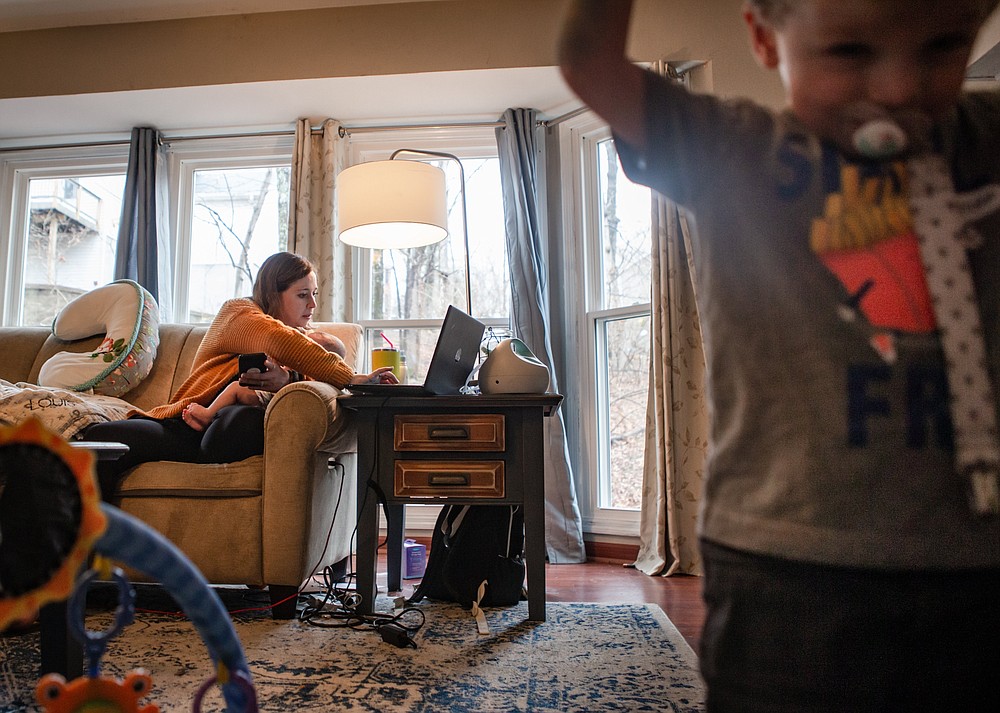 Dr. Elizabeth Bergamini, pediatrician in suburban St. Louis, searches online for open COVID-19 vaccine appointments while holding her 4-month-old son, Louis, and supervising her 2-year-old son, James Jerome, at her home in Wildwood, Mo., on March 11, 2021. Bergamini drove about 30 people to often out-of-the way vaccination events after the state opened eligibility to those 65 and older Jan. 18 and then expanded further. (Sara Diggins/St. Louis Post-Dispatch via AP) 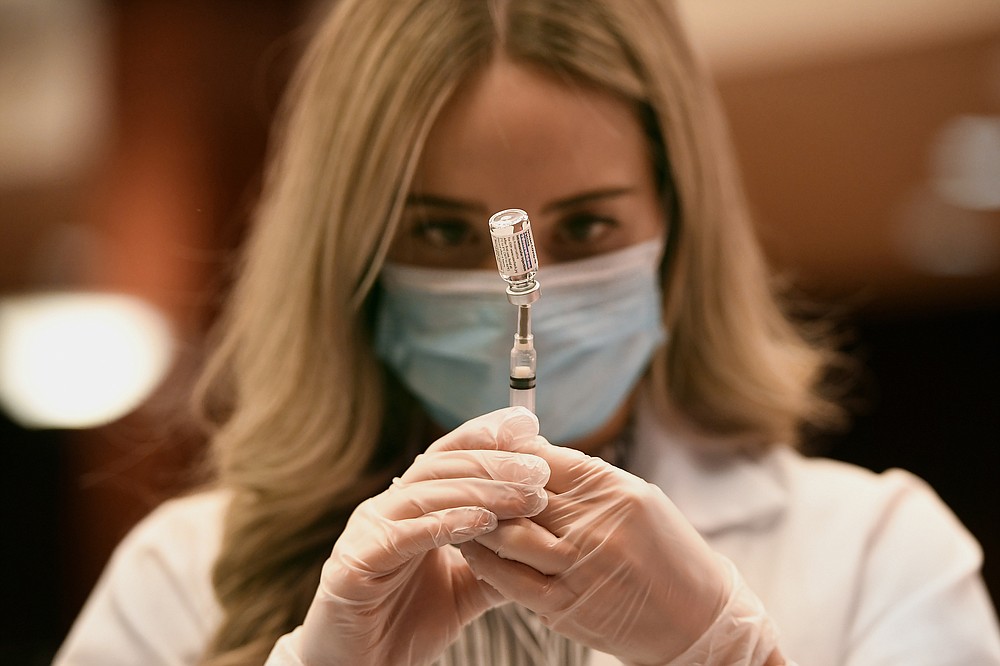 FILE - In this March 3, 2021, file photo, pharmacist Madeline Acquilano draws a syringe of Johnson & Johnson COVID-19 at Hartford Hospital in Hartford, Conn. Despite the clamor to speed up the U.S. vaccination drive against COVID-19 and get the country back to normal, the first three months of the rollout suggest faster is not necessarily better. (AP Photo/Jessica Hill, File) 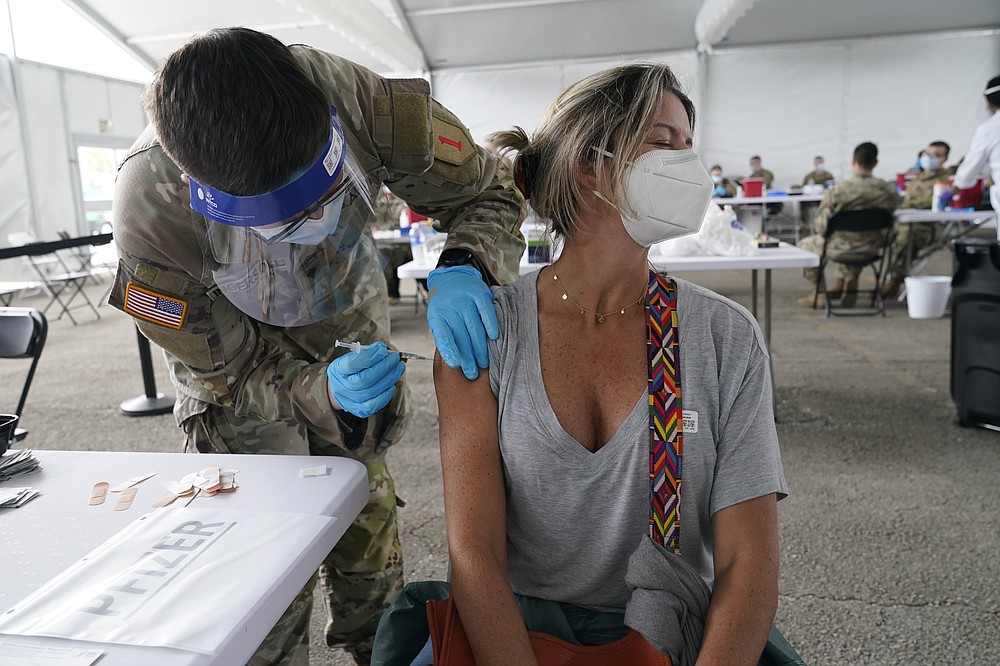 FILE - In this March 9, 2021, file photo, Liana Fonseca looks away as she receives the Pfizer COVID-19 vaccine in Miami. Despite the clamor to speed up the U.S. vaccination drive against COVID-19, the first three months of the rollout suggest faster is not necessarily better. (AP Photo/Marta Lavandier, File) 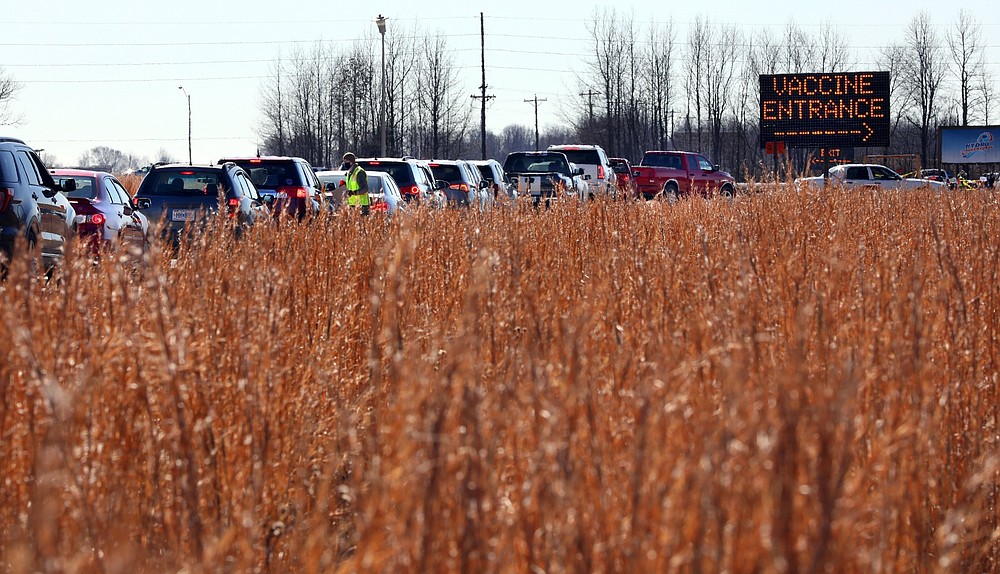 FILE - In this Jan. 22, 2021, file photo, vehicles snake through a line beside a farm field in Poplar Bluff, Mo., for the state's first mass COVID-19 vaccination event. Despite the clamor to speed up the U.S. vaccination drive against COVID-19, the first three months of the rollout suggest faster is not necessarily better. (Robert Cohen/St. Louis Post-Dispatch via AP, File)
ADVERTISEMENT