Beyond the Call of Duty 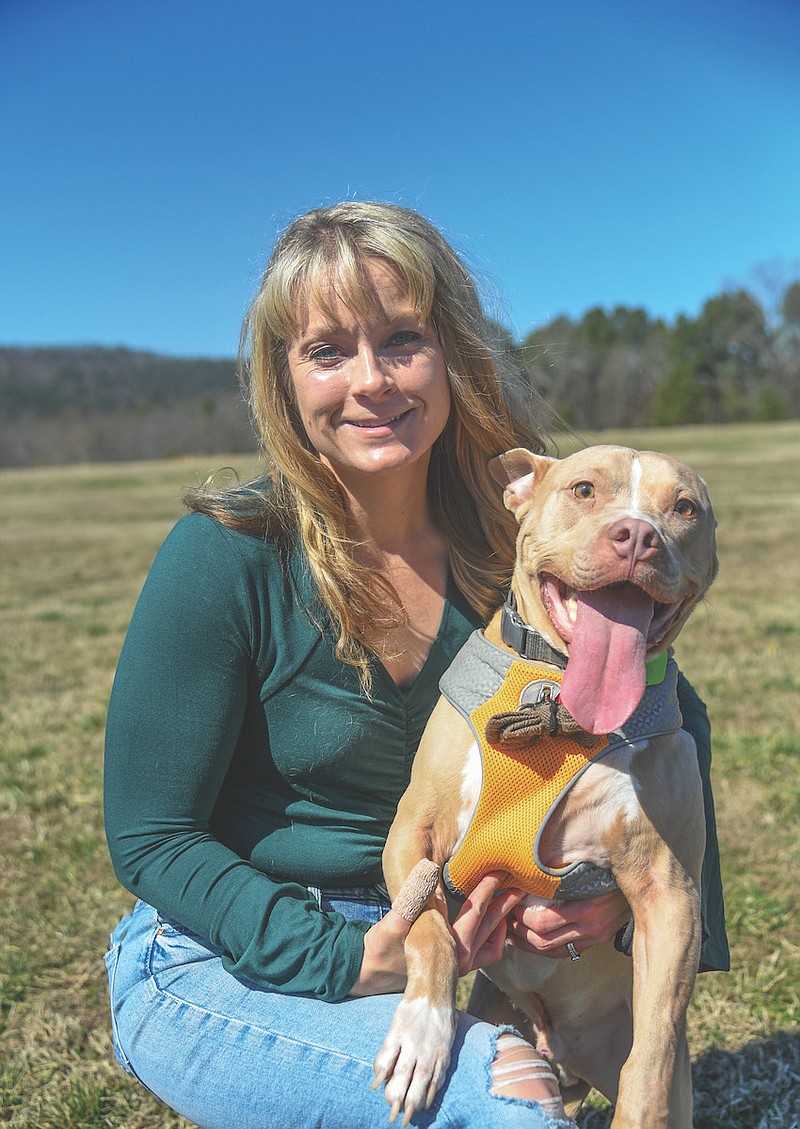 LeeAnn Zaner has her photo taken with her pitbull Leo at Cedar Glades Park.

As patrol sergeant for the Hot Springs Police Department, much of LeeAnn Zaner's day is spent interacting with and helping the citizens of Hot Springs. Over the years, Zaner began to notice different needs within the pet-owner community that intersected with her duties as a police officer. Every now and again, she finds herself in situations where she helps out a four-legged resident of the city.

"I see so much need on a daily basis while working with the public. A need for education about vaccinations, spaying and neutering, over breeding, assistance with funding, and space for unwanted dogs. I'm in a position where I see things most people don't get to see or they don't know those types of circumstances exists," Zaner said.

Police officers encounter some of the vulnerable instances in people's lives, from domestic disturbances to traumatic car wrecks. In her 16 years on the force, Zaner continued to encounter situations where people's pets were in need of immediate assistance. Helping someone with their injured pet while responding to a domestic disturbance is not exactly in her job description, but Zaner feels drawn to help in these situations.

"I've always loved dogs and grew up with dogs in my life. They are your companion when you feel like you have no one else. They don't care if you were rejected or hurt by a loved one. Even when you feel dejected, they are always excited to see you and offer love unconditionally. These dogs I encounter in distress usually just need the right person to come along. I can be that person to help them find the right family or be the one who can make a difference by helping educate a family," she said.

Her work in animal rescue deeply intertwines with her personal life. Zaner grew up in Malvern and graduated from Henderson State University. Her husband is also a sergeant at the department. Together they have five rescue dogs along with her two stepdaughters. While they try to give each dog the same amount of attention, their pit bull Leo is what Zaner calls their "most human dog."

"Leo is one-of-a-kind type of dog. Leo is the first pit bull we've owned but definitely isn't our last," Zaner said. "He's the type of dog who comes around once in a lifetime. He came to us as I say, by fate. He was a stray who got stuck in a gated area and couldn't get out once a gate closed behind him. My husband, Kirk, tried to free him and Leo was scared and instead kept running away. At first, Kirk was scared of Leo and how he might react because of the "stereotype" we often hear about pit bulls.

"They were finally able to catch him. He was skinny and obviously abused by a human. He had a white line in his fur around his hindquarter. It was apparent someone had tied him up with a rope or similar object just in front of his back legs. They tied this rope so tight it embedded into him. He made eye contact with Kirk and my husband said it was like he was begging for help and had loving eyes. I was hesitant to agree to let him come to our home so we could 'foster' him. I didn't realize this was a ploy of my husband's, as he had already fallen in love with him. It wasn't hard to see why he fell in love with him after only a few days."

Adopting Leo allowed Zaner and her family to learn more about this particular breed of dog and do away with "stereotypical" fears about a pit bull's aggressive nature. Soon enough, they fell in love with the breed entirely.

"They're a beautiful, loving breed. I've owned dogs my entire life and from my experience, they are one of the most loyal breeds. They want to please and nurture their humans more than anything," Zaner says. "'Pit bull' is a blanket term, which can mean numerous breeds of dogs including the American Staffordshire terrier, American Bully, American Pitbull Terrier, and Staffordshire Bull Terrier. These breed dogs are usually extremely powerful dogs and they have a high drive. Just as humans, they need to be loved, nurtured, fed a good diet, exercised, and not mistreated.

"The problem comes when an owner doesn't do some or any of these things and expects their dog to behave. We wouldn't do that with our children; therefore, we can't do it with our dogs. I see time in again, people owning 'pit bulls' for all the wrong reasons. They intentionally treat them wrong to try and make them mean. You don't see people doing this with Yorkies or poodles. This aids in the bad rap this breed gets. Statistics prove time in again, you're more likely to be bit by a chihuahua or dachshund, but those bites usually don't injure like a bite from a larger breed dog."

After about a year of living with Leo, Zaner's worst nightmare came true when he ran away following a "freak accident." A large picture hanging on the wall inside her living room randomly crashed to the floor at a moment when her front door was standing open. Due to his past, Leo was naturally skittish in nature and bolted out the front door toward the lake.

The hours she, her family, and friends spent searching for Leo were in vain. Eventually, Zaner took to social media and canvassing the area with posters to spread the word about her beloved missing pooch. They even went so far as to offer a cash reward.

"We had many sightings and near misses. It was amazing to see the community come together to help search for him. One night, over two weeks after he went missing we received a phone call a fisherman had located Leo stuck in a hole in the side of the embankment of Lake Hamilton. He must have been one of the few people in the area who was unaware of the search. He placed him on the opposite side of the lake then went home and told his wife about what happened. She alerted us, but we were hours behind. I posted the information on Facebook and went to the area as soon as I left work. When I drove to the area to search and add more flyers, there were over 100 people driving, walking the roadway and tree line looking calling for Leo, alongside my husband. Many of these people I had never met but hey had been keeping up with my posts online. It brought me to tears knowing so many people cared and wanted to help. These people were of all races. There were men, women, children, poor and rich (people). It made me realize regardless of our backgrounds, we can all unite together. It was beautiful to see and be a part of," she said.

Eventually, Zaner's husband located Leo in a field and brought him home. He has not strayed far from sight since. After things started to settle down, Zaner said she felt as if she should somehow find a way to repay the kindness she and her husband were shown during their search for Leo. Not long after, the opportunity presented itself.

Later that year, while responding to a call, Zaner encountered a dog that had been stabbed by a man that "just went crazy." Unfortunately, the dog's owners did not have enough money to cover an emergency visit to the veterinarian. Fate would have it that Zaner was one of the officers responding to the call.

"I rushed him to the vet's office at Temperance Hill Animal Hospital because people didn't have money and they fixed him up and sewed up his wounds. At that point, I offered to pay them out and speak to the vet. I had the idea to ask if I could open some kind of account with them. That way, I could have a fund set up to help the animals when we have these types of emergencies. Now, whenever a police officer brings a dog to them, they can get reimbursed for their work immediately," she said.

At first, the account was made solely of donations Zaner made herself. However, after she took to social media, animal lovers in the community started making donations. In addition to helping injured animals, Zaner also started to branch out and help relocate any breed deemed "pit bull" in the area.

Until recently, any "pit bulls" brought in to Hot Springs Animal Services were not permitted to be put up for adoption per a recently dissolved city ordinance. Now, nonprofits specializing in animal rescue are permitting to adopt and rehabilitate the dogs that fall within that breed.

"I definitely was one of the people begging to change the ordinance, but Michelle Stone is the one who really got it going. I was really excited when I found out they passed a new ordinance. It really opened the door so there is more than one option for them. Pit bulls can become the most amazing member of your family," she said.

With the new city ordinance, Zaner is looking to expand her small rescue beyond a few foster homes and fill a void that exists across the state for Pitbull rescues. She is currently working on starting a nonprofit animal rescue that will specifically focus on rescuing otherwise "unadoptable" pit bull breeds.

"We are contacted all the time with needs," she said. "Need for emergency treatment, need for dog adoption, need for space to keep unwanted animals. People often get in over their heads and take on too much and expect us to solve their problems immediately. So many don't vaccinate and their dogs suffer from life-threatening illnesses which could have been prevented with a small fee on the front end. We rescued one dog, a pit bull mix whose owner surrendered him because he wasn't willing to care for him. We took him to THAH for his vaccinations and he was diagnosed with Parvo within two days. He fought for his life for two weeks in ICU isolation. With excellent care from the doctors and staff and almost $2,000 in vet fees, he survived.

"One medical emergency can completely deplete our rescue since we're so small. We've often dipped into our own pockets to help. It hurts not being able to help everyone, but we can't. Shelters are overcrowded and underfunded. Hopefully, the nonprofit I am starting can really help make a difference."

With the growth of her rescue, Zaner continuously seeks out like-minded people to assist her in this journey. Simple donations to the account at THAH go a long way, while others step up in a more hands-on way and foster. Whatever the form of service, Zaner says she is thankful for everyone who contributes to her efforts and how it has changed her life, as well.

"I've grown as a person. Even though I see some of the worst things, I've met some of the most amazing people through the trials. There are so many people out there just like me, who are wanting the best for these dogs. I'm so thankful for all the donors and appreciative of the friendships, guidance, and knowledge I've gained since beginning this rescue with nothing monetarily and a very small network of people. I'm thankful to THAH for what they've done for me and lucky to have a husband who has a passion for animals like me. I know I can't educate everyone or save every dog, but I know I can be a difference-maker for a few and for that opportunity, I'm grateful to God," she said.