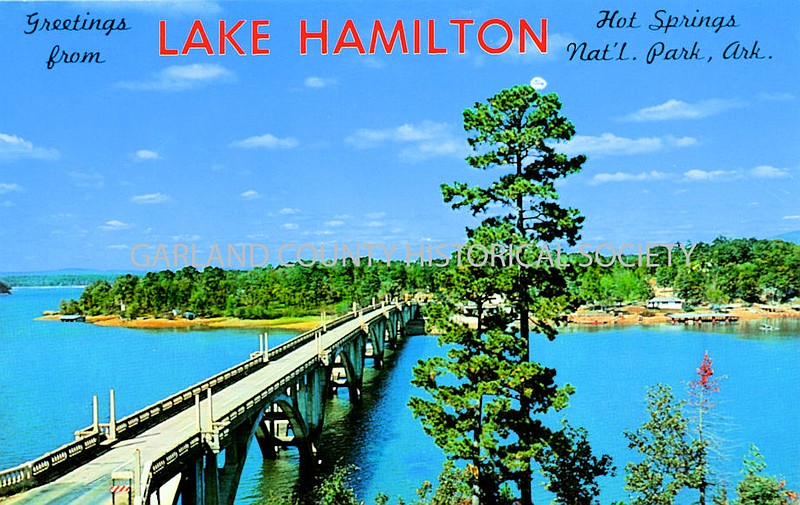 The creation of lakes Hamilton, Catherine and Ouachita started with the dream of a former Ouachita River steamboat pilot, Flave Carpenter.

After his pilot days, Carpenter became a deputy U.S. marshal. Searching on horseback for moonshiners through the Ouachita Mountains in the late 1800s, he spotted two places that he thought would be perfect for dams that could control floods and improve navigation on the upper Ouachita River. He didn’t have the money to pursue his dream, but in 1916 he interested Harvey Couch, founder of Arkansas Power and Light Co., in his vision. Couch, intrigued by the hydroelectric potential of dams on the Ouachita, followed Flave on horseback and on foot to see the locations. He was sold.

At the first location, Remmel Dam (at what is now Jones Mill) was completed in 1924 for $2,142,00. The first hydroelectric plant in Arkansas, Remmel Dam formed Lake Catherine. Named for Couch’s daughter, the 11-mile-long lake covers 2,000 acres. The dam (65 feet tall, 900 feet long, generating 9.3 megawatts) was named for Harmon Remmel, who helped get federal approval for the project. The dam helped make AP&L (later Entergy) a major utility corporation.

Couch had long dreamed of building a third dam. Starting in the 1920s, AP&L began buying thousands of acres in the projected reservoir vicinity 10 miles northwest of Hot Springs, and area residents began moving out. In 1938, AP&L and the federal government announced they would jointly build Blakely Mountain Dam (which would provide hydroelectric power and better flood control), but in 1939 the federal government assumed sole control of the project. Built by the Army Corps of Engineers, the dam portion (providing flood control) was complete by 1952, and the power plant went online in 1955.

The lake inundated a once-populated area. Graves from 16 cemeteries had to be moved. Homes, schools, churches, farms, businesses, entire towns — like Buckville and Cedar Glades — disappeared. But the lakes created by Blakely and the other dams have been a boon to Garland County.

In the past, our economy was tied to the thermal bathing industry (which nose-dived after 1946) and the illegal gambling industry (which ended in 1967). Diverse attractions bring many people here now, but the lakes are a huge part of why they come to Garland County.

And it all started with Flave Carpenter, a horse, and moonshiners in the Ouachitas.