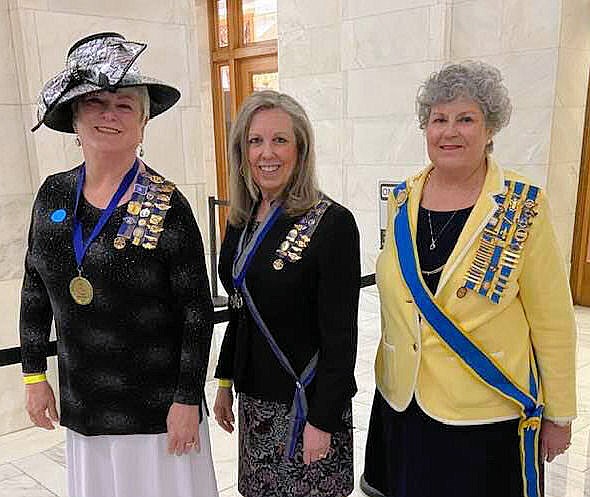 From left are Sheila Beatty, Kay Brakefield Tatum and Linda Vandenberg White. Tatum is one of only three in Arkansas who have received the Historian Award. - Submitted photo

Tatum was presented with a certificate and an official pin. State Historian DeeLois Lawrence submitted Tatum for the national award.

"The award is to honor someone who has shown outstanding efforts in American history-related activities or studies. Among Tatum's accomplishments include marking and dedicating the graves of Veterans buried in Arkansas who served in the War of 1812. These graves include 17 who are buried at Mount Holly Cemetery in Little Rock," said Lawrence, who also cited other examples.

Tatum obtained permission from the Arkansas secretary of state, Capitol Arts and Grounds Commission, to add 634 names of veterans to the War of 1812 Memorial Fountain. "This was during a time when monuments were being attacked and was a sensitive issue to be avoided by politicians. Many of the Veterans' graves have not been located and probably never will. It is the largest listing of War of 1812 Veterans in the United States and the largest listing of Veterans of any war listed in Arkansas with a total of 693 listed," the release said.

"Her perseverance also was evident after she worked six years for legislation that would protect Arkansas Monuments and recently Senate Bill 553 was approved. The Bill defines a historical monument as a statue, memorial, gravestone plate, plaque or historical flag display that is on public property and was installed, erected for or named or dedicated in honor of a historical person, event, public service organization, firefighter, police officer, military organization or military unit. The bill also says the monument must either be listed on the National Register of Historic Places or be in a veterans' cemetery,'" the release said.

Tatum has held positions in many organizations whose objectives are historical preservation.

For information regarding the activities of the Arkansas Society U.S.D. 1812 or membership, email state president Jerrie Townsend at [email protected] U.S.D. 1812 has chapters in Texarkana, Little Rock, Pine Bluff and Bella Vista.