What's new? Another Derby (7) for Baffert 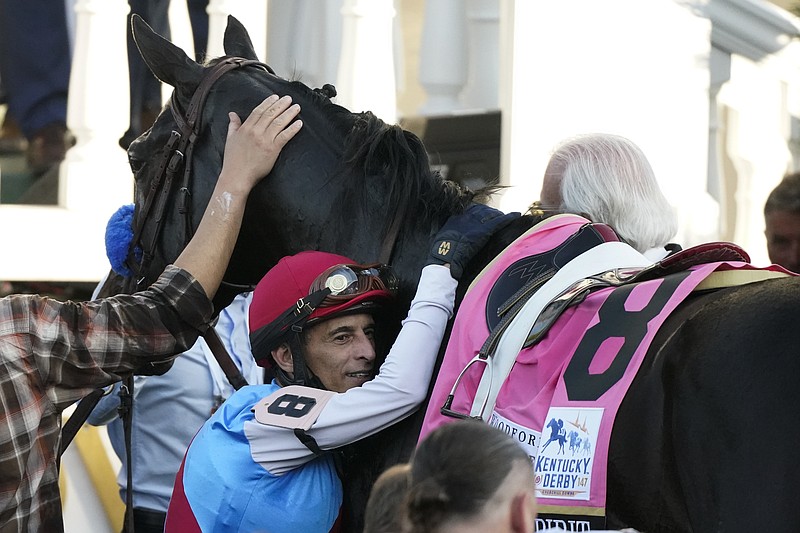 Trainer Bob Baffert hands the winner's trophy to jockey John Velazquez after their victory with Medina Spirit in the 147th running of the Kentucky Derby at Churchill Downs Saturday in Louisville, Ky. - Photo by Jeff Roberson of The Associated Press

Bob Baffert, or at least his horses, makes winning the Kentucky Derby look easy, which for everyone else it assuredly is not.

The last two of a record seven times the white-haired trainer has won the race, one of his horses made the early lead and went on to wear the winner's blanket of roses. Nothing to it, right?

Medina Spirit, like Authentic in 2020, had his name hung in gold letters above the Churchill Downs paddock at day's end. John Velazquez, who also rode Authentic and collected his fourth Derby win, captured the moment: "It never gets old. I hope to come back next year."

And thus NBC, in what is becoming an early-May tradition, can promote the Preakness asking if another Baffert horse can do it at Pimlico in two weeks.

"Can he win the Triple Crown? I don't know. But he's the Derby winner, and that's all matters," Baffert said Sunday morning.

And if Medina Spirit is cut from lesser cloth than, say, American Pharoah and Justify, so what? Winning the Preakness a record eight times and the Triple Crown twice, Baffert has been there, done that.

Unless health or boredom overcomes the 68-year-old trainer, who else has a chance in these big races? In almost eight months, starting with the first September Derby, Baffert has two Derby wins and one (with Authentic) in the Breeders' Cup Classic. At least, he's nice enough to let us bet on his horses.

Baffert winning a seventh Derby comes in a year that Nick Saban coached his seventh national champion in college football and Tom Brady won his seventh Super Bowl. What's next: a seventh NBA title (one more than Michael Jordan, his rival as the "GOAT" of pro basketball) for LeBron James?

A rival trainer expressed several years ago what Baffert's colleagues must be feeling. Some of these people, good trainers all, might get one Derby contender in a lifetime. Baffert seems to have his pick every year.

"You've got to understand that at any one time, Baffert has 50 of the best horses in the world and goes from there," the man said.

Some, like the Triple Crown winners named above, stand apart. Not to disparage Medina Spirit but Saturday's winner might need to achieve greater glory to reach that level. For now, put Medina Spirit in the War Emblem wing of Baffert-trained Derby horses, one that carried his speed for a mile and a quarter. And lift a glass for Point Given (2001 Horse of the Year after running fifth in the Derby), perhaps the best also-ran Baffert ever saddled.

After a series of prep races that his horses had a strong but not overwhelming presence, Medina Spirit came to Louisville underneath the radar and went off 15-1. I'm not sure I mentioned the horse in Tuesday's Derby-draw story other than Baffert was the trainer and his No. 8 post position was ideal compared to others in the field of 20.

Only with Baffert could a horse not considered fast enough to win the Derby lead from wire to wire.

Then again, only because of Baffert would such a horse be given a puncher's chance against more consistent, flashier-bred horses. Rather than brand names like Tapit or Into Mischief, Medina Spirit represented first-year sire Protonico. What's more, his $35,000 sale price as a 2-year-old made him look like a commoner in an elite field.

"He doesn't know how much he cost," Baffert said. "He won't let anyone pass him. Johnny Velazquez ... told me last night not to underestimate the horse. He's better than you think."

Baffert added, "I was coming in here, thinking ... everything had to go perfect for him. We were going to the lead, and see what happened. What if they challenged him?"

When the gates sprang on, a replay of the 1985 Derby unfolded. In that one, Eternal Prince, owned by New York Yankees boss George Steinbrenner and considered the lone speed, broke poorly; Spend a Buck inherited the lead and gave Angel Cordero Jr. his third and easiest Derby triumph.

In this one, Rock Your World, the unofficial wise-guy horse of the race off a front-running score at Santa Anita, didn't break. Medina Spirit, said Baffert, "made the lead pretty easily, for him."

Rock Your World, second pick at 9-2, finished 17th, one more Derby horse done in by a bad trip. "We got squeezed at the start and we were done. No chance," said trainer John Sadler.

"That's what it's like in the Derby," Baffert said. "You have to get the trip; the other horse didn't get the trip."

Medina Spirit enjoyed the same trip and with the same rider, Velazquez, that Authentic received in the first September Derby. He delivered the performance once expected of Baffert-trained stakes winners Life Is Good and Concert Tour.

"Going down the backside, he was doing it easy, you could tell he was enjoying himself. His ears were forward," Baffert said. "And turning for home, they came for him, and he just dug in. I didn't know if he was going to do it. He fought hard, and ran sort of the race that he did at Santa Anita when he won the Robert B. Lewis. They came to him, and he fended them all off.

"I couldn't believe it, at the sixteenth pole he was fighting and fighting," Baffert continued. "It was just a thrill to watch him do it, and fight on."

Mandaloun, second at 26-1, trainer Brad Cox's other Derby starter, got the trip that stablemate Essential Quality did not. The Equibase Co. footnote nutshells the story, that Mandaloun, a stakes winner in Louisiana, "came to level terms nearing the quarter pole, battled on between rivals but was unable to beat the determined winner."

The winner's margin was a half length and his time, 2:01.02, was respectable. The exacta paid $503.60, the trifecta (with Louisiana Derby winner Hot Rod Charlie) came to $848.45 and the superfecta, completed by $2.90-to-1 favorite Essential Quality returned $9,400. Lest anyone think less of Essential Quality, who had won all five starts but was wide all the way from post 14, only one length stood between the Tapit colt and elusive Derby glory for Godolphin Stable.

Brad Cox, becoming a trainer for all seasons and on all surfaces, is sure to have other chances. Same for Steve Asmussen, who's won everything else in the sport but is 0 for 23 in the big one.

Is Medina Spirit a Triple Crown winner in waiting? Check back in two weeks for an update. All we can say now is that he's the only horse from the crop of 2018 with a chance. And with Baffert in his barn, it's more than a puncher's chance.