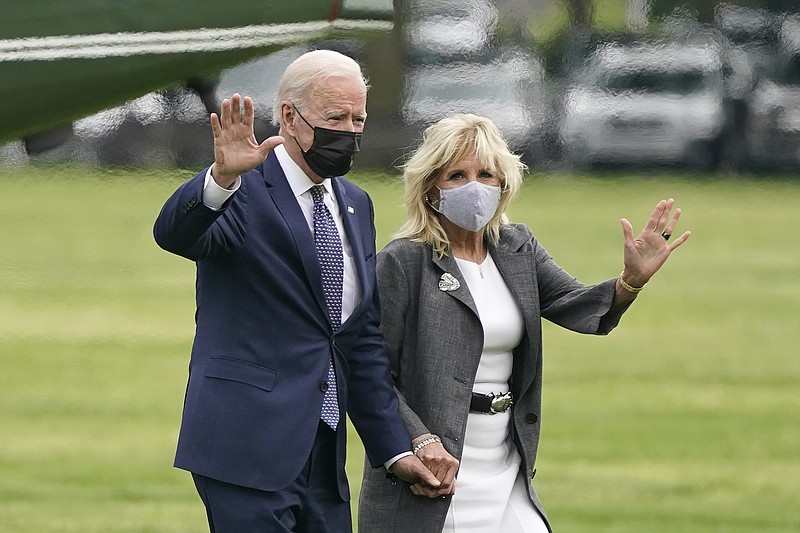 President Joe Biden and first lady Jill Biden wave after stepping off Marine One on the Ellipse near the White House, Monday, May 3, 2021, in Washington. The Biden's traveled Monday to coastal Virginia to promote his plans to increase spending on education and children, part of his $1.8 trillion families proposal announced last week. (AP Photo/Patrick Semansky)

WASHINGTON -- President Joe Biden on Monday formally raised the nation's cap on refugee admissions to 62,500 this year, weeks after facing bipartisan blowback for his delay in replacing the record-low ceiling set by former President Donald Trump.

Refugee resettlement agencies have waited for Biden to quadruple the number of refugees allowed into the United States this year since Feb. 12, when a presidential proposal was submitted to Congress saying he planned to do so.

But the presidential determination went unsigned until Monday. Biden said he first needed to expand the narrow eligibility criteria put in place by Trump that had kept out most refugees. He did that last month in an emergency determination. But it also stated that Trump's cap of up to 15,000 refugees this year "remains justified by humanitarian concerns and is otherwise in the national interest," indicating Biden intended to keep it.

That brought sharp pushback for not at least taking the symbolic step of authorizing more refugees to enter the U.S. this year. The second-ranking Senate Democrat, Dick Durbin of Illinois, called that initial limit "unacceptable" and within hours the White House made a quick course correction. The administration vowed to increase the historically low cap by May 15 -- but the White House said it probably would not hit the 62,500 Biden had previously outlined.

In the end, Biden returned to that figure.

Biden said he received additional information that led him to sign the emergency presidential determination setting the cap at 62,500.

"It is important to take this action today to remove any lingering doubt in the minds of refugees around the world who have suffered so much, and who are anxiously waiting for their new lives to begin," Biden stated before signing it.

Biden said Trump's cap "did not reflect America's values as a nation that welcomes and supports refugees."

But he acknowledged the "sad truth" that the U.S. would not meet the 62,500 cap by the end of the fiscal year in September, given the pandemic and limitations on the country's resettlement capabilities -- some of which his administration has attributed to the Trump administration's policies to restrict immigration.

The White House insisted it was unable to act until now because the administration was being taxed by a sharp increase in unaccompanied young migrants from El Salvador, Guatemala and Honduras arriving at the southern U.S. border, though any link between the border and the government's decision on refugees was not immediately clear. Refugee advocates, including Durbin, accused Biden of playing politics.

Biden said Monday it was important to lift the number to show "America's commitment to protect the most vulnerable, and to stand as a beacon of liberty and refuge to the world."

Secretary of State Antony Blinken said work is being done to improve U.S. capabilities to process refugees in order to accept as many of them as possible under the new cap. Since the fiscal year began last Oct. 1, just over 2,000 refugees have been resettled in the U.S.

Travel preparations are being made for more than 2,000 refugees who were excluded by Trump's presidential determination on Oct. 27, 2020.

"We are absolutely thrilled and relieved for so many refugee families all across the world who look to the U.S. for protection," said Krish O'Mara Vignarajah, head of Lutheran Immigration and Refugee Service, one of nine resettlement agencies in the nation. "It has a felt like a rollercoaster ride, but this is one critical step toward rebuilding the program and returning the U.S. to our global humanitarian leadership role."

Biden has also added more slots for refugees from Africa, the Middle East and Central America and ended Trump's restrictions on resettlements from Somalia, Syria and Yemen.

Some 35,000 refugees have been cleared to go to the United States, and 100,000 remain in the pipeline. Resettlement agencies that closed more than 100 offices during the Trump administration said the cap needed to be raised to unleash resources.

"The way you rebuild capacity is by setting ambitious commitments that signal to domestic and international stakeholders that U.S. leadership is back," said Nazanin Ash of the International Rescue Committee. 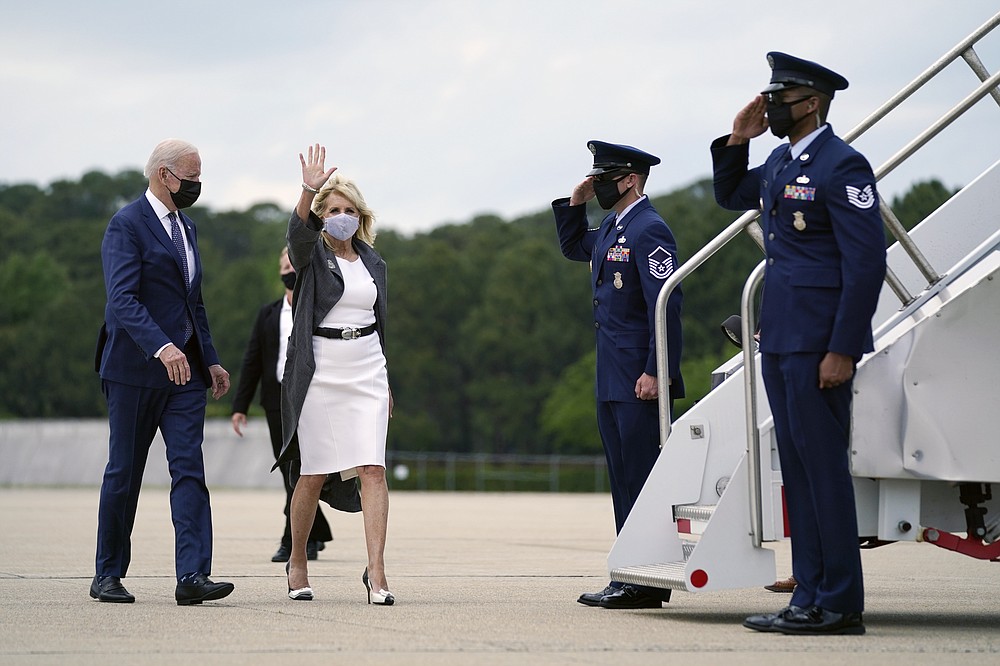 President Joe Biden and first lady Jill Biden wave as they board Air Force One to depart at the Newport News/Williamsburg International Airport, Monday, May 3, 2021, in Newport News, Va. They traveled Monday to coastal Virginia to promote his plans to increase spending on education and children, part of his $1.8 trillion families proposal announced last week. (AP Photo/Evan Vucci)
ADVERTISEMENT