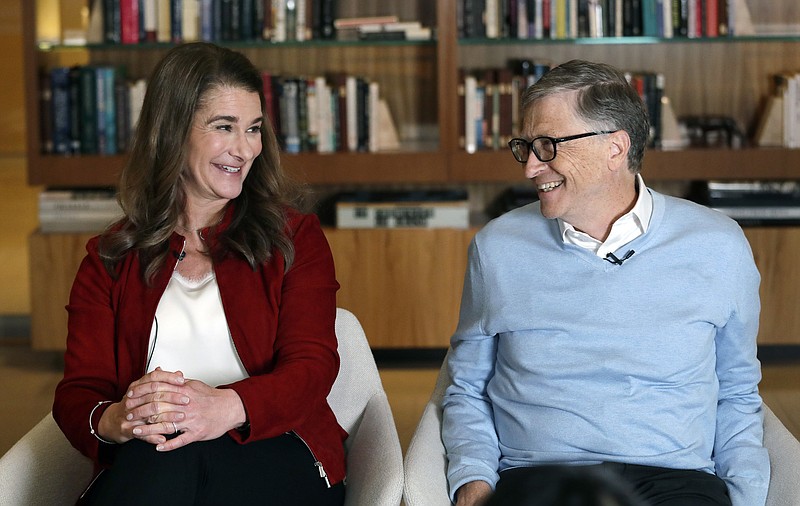 FILE - In this Feb. 1, 2019, file photo, Bill and Melinda Gates smile at each other during an interview in Kirkland, Wash. The couple announced Monday, May 3, 2021, that they are divorcing. The Microsoft co-founder and his wife, with whom he launched the world's largest charitable foundation, said they would continue to work together at The Bill & Melinda Gates Foundation. (AP Photo/Elaine Thompson, File)

In identical tweets, the Microsoft co-founder and his wife said they had made the decision to end their marriage of 27 years.

"We have raised three incredible children and built a foundation that works all over the world to enable all people to lead healthy, productive lives," they said in a statement. "We ask for space and privacy for our family as we begin to navigate this new life."

Bill Gates was formerly the world's richest person and his fortune is estimated at well over $100 billion. How the couple end up settling their estate and any impact on the foundation will be closely watched, especially after another high-profile Seattle-area billionaire couple recently ended their marriage.

Amazon CEO Jeff Bezos and MacKenzie Bezos finalized their divorce in 2019. MacKenzie Scott has since remarried and now focuses on her own philanthropy after receiving a 4% stake in Amazon, worth more than $36 billion.

The Gateses were married in 1994 in Hawaii. They met after she began working at Microsoft as a product manager in 1987.

In her 2019 memoir, "The Moment of Lift," Melinda Gates wrote about her childhood, life and private struggles as the wife of a public icon and stay-at-home mom with three kids. She won Bill Gates' heart after meeting at a work dinner, sharing a mutual love of puzzles and beating him at a math game.

She also detailed the ways they navigated imbalances in their marriage and parenting journey and noted how working together at the foundation made their relationship better.

"Bill and I are equal partners," Melinda Gates said in a 2019 interview with The Associated Press. "Men and women should be equal at work."

The Seattle-based Bill and Melinda Gates Foundation is the most influential private foundation in the world, with an endowment worth nearly $50 billion. It has focused on global health and development and U.S. education issues since incorporating in 2000.

While both are global figures, Melinda Gates has increasingly built her profile as a champion of women and girls. The former tech business executive launched her private Pivotal Ventures investment and incubation company in 2015 and recently partnered with Scott for a newly announced equity challenge.

David Callahan, founder of the Insider Philanthropy website and author of "The Givers: Wealth, Power, and Philanthropy in a New Gilded Age" says it's too early to know how the divorce will affect the Gates foundation and the wider philanthropic community.

Although the couple say they will continue to work together at their foundation, Callahan suggests Melinda Gates could still pursue her own philanthropic work.

"You can imagine two separate tracks where they're both working together at the foundation, and each is pursuing their own independent philanthropy outside the foundation," Callahan said.

He said the possibility of Melinda Gates opening another philanthropic foundation would have a dramatic impact.

"Nobody knows what the terms are of their divorce agreement. But if Melinda Gates ends up with just some portion of that wealth and turns to creating her own foundation, it would be among one of the biggest foundations probably in America," Callahan said.

As the public face of the foundation's COVID-19 grants and advocacy work, Bill Gates has come under fire for being a staunch supporter of intellectual property rights for vaccine makers. While the tech icon says protecting the shots' recipes will ensure incentives for research and development, critics claim that mentality hampers supply in favor of drug company profits.

Last year, Bill Gates said he was stepping down from Microsoft's board to focus on philanthropy.

He was Microsoft's CEO until 2000 and since then has gradually scaled back his involvement in the company he started with Paul Allen in 1975. He transitioned out of a day-to-day role in Microsoft in 2008 and served as chairman of the board until 2014. 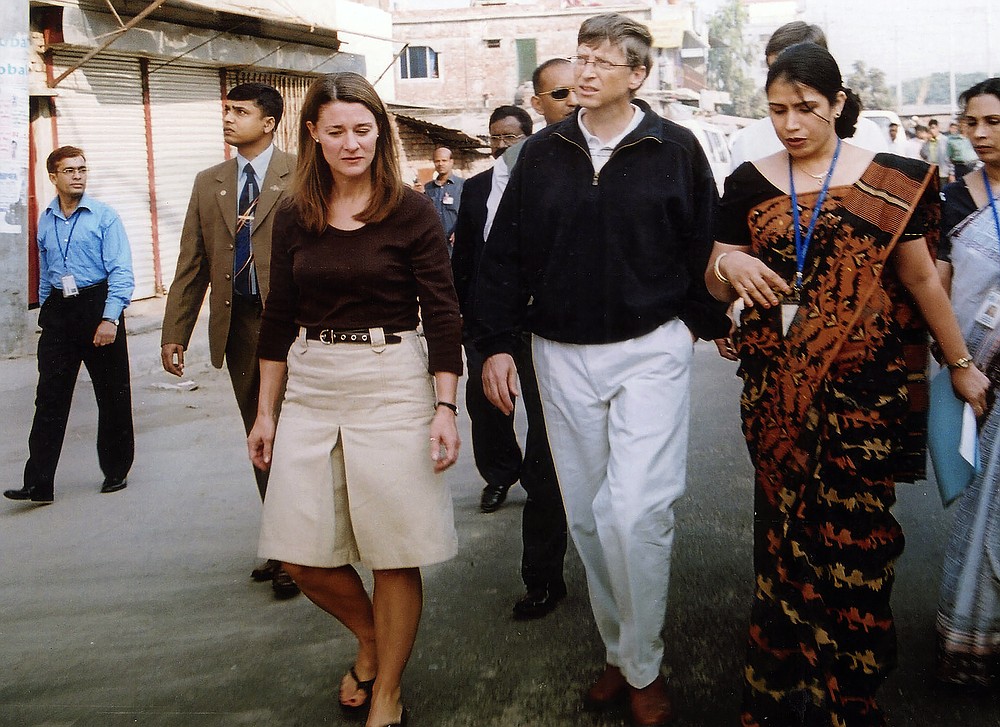 FILE - In this Dec. 5, 2005, file photo, Bill Gates, founder and chairman of Microsoft Corp., center, and his wife Melinda, left, walk on a street in Dhaka, Bangladesh. The couple announced Monday, May 3, 2021, that they are divorcing. The Microsoft co-founder and his wife, with whom he launched the world's largest charitable foundation, said they would continue to work together at The Bill & Melinda Gates Foundation. (AP Photo/Gazi Sarwar, File) 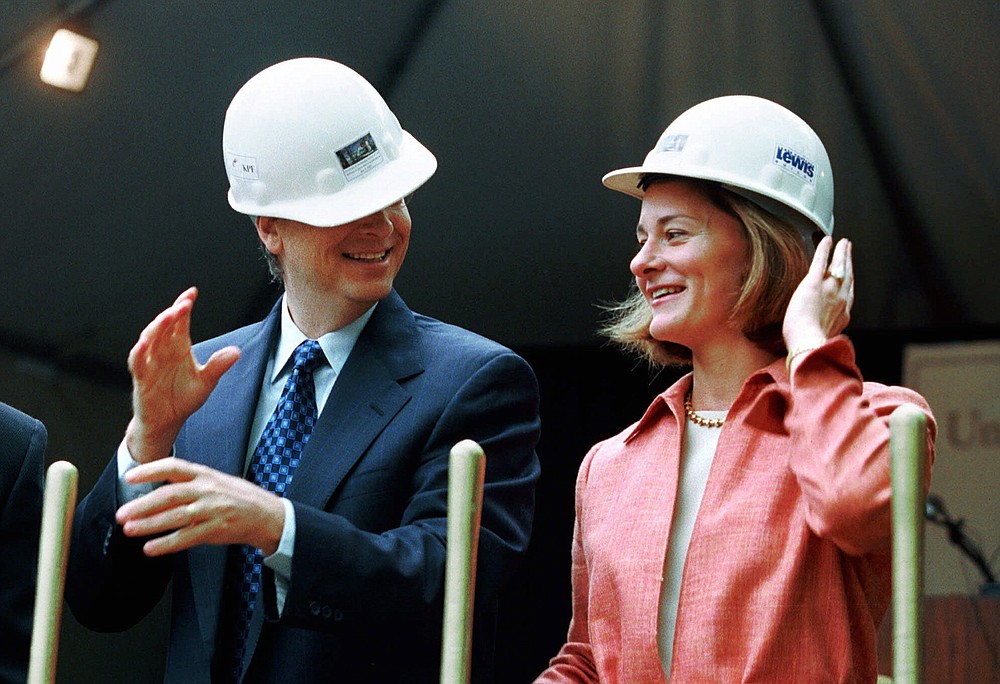 FILE - In this May 4, 2001, file photo, Microsoft Chairman Bill Gates contends with an ill-fitting hard hat while his wife, Melinda Gates, looks on in Seattle at the groundbreaking of the University of Washington's new law school facility, William H. Gates Hall. The couple announced Monday, May 3, 2021, that they are divorcing. (AP Photo/Andy Rogers, File)
ADVERTISEMENT