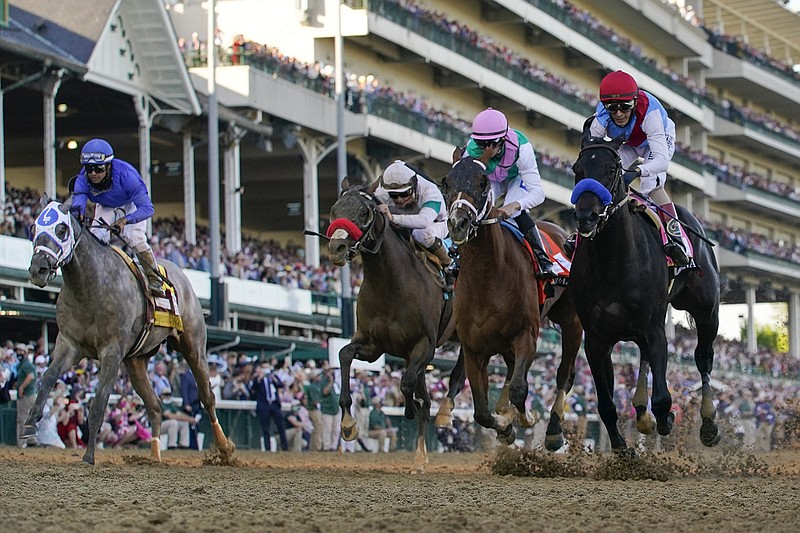 Almost everything came up roses for Brad Cox, though not in the truest sense.

That would have required a higher placing for Mandaloun (second) or Essential Quality (fourth), the Louisville native's first two Kentucky Derby starters Saturday. Mandaloun finished a half-length back and Essential Quality lost by one length, else the 41-year-old Cox would have a career sweep of 147-year-old Grade 1 races under the iconic twin spires of Churchill Downs.

Although his first Grade 1 victory came in 2018 at Keeneland with Monomoy Girl, Cox has scored three such triumphs at his home track. Monomoy Girl won the Kentucky Oaks, as did Shedaresthedevil last year, and Leofric took the 2018 Clark Handicap. All three horses won at Oaklawn.

In a recurring storyline, Hall of Fame trainer Bob Baffert kept rewriting history with his record seventh Kentucky Derby victory and record 17th in the Triple Crown. Medina Spirit, a longshot on the board if not in the trainer's heart, led from gate to wire under Hall of Fame rider John Velazquez, who won last year's Derby with the Baffert-trained Authentic.

The Derby proved about the only glitch for Cox over the weekend. On Friday, in the last hours of her reign as Kentucky Oaks champion, Shedaresthedevil scored a second Grade 1 victory in Churchill's La Troienne. Saturday, besides winning two races on the Derby undercard, Cox trainees Fulsome and Warrant finished one-two in the $300,000 Oaklawn Stakes, which offered a Preakness berth May 15 at Pimlico.

Sunday after the Derby brought Cox a Grade 2 victory at New York's Belmont Park with 5-year-old mare Vault, who like Shedaresthedevil had a last-out Oaklawn win. After not finishing the Pippin in January, Vault won an Oaklawn allowance March 27 going a mile and one-sixteenth.

In the Ruffian, her first graded victory, Vault came from last in the six-horse field to win by 1 3/4 lengths, same margin as at Oaklawn, with a fast-rated mile in 1:35.81 under Joel Rosario. Water White, trained by Rudy Rodriguez, ran second and Oaklawn-raced Our Super Freak third for Cherie DeVaux. Favorite Lake Avenue, trained by Bill Mott, ran fourth.

Vault joined the Cox stable in New York after training at Churchill Downs. "It took us a while to figure her out, but now it looks like we got the wheels spinning finally and she showed it today," said Cox assistant Dustin Dugas. "The guys in Kentucky had her ready to roll. I'll talk to Brad and let him decide where we go next."

Cox mentioned possible starts in California and New York after Shedaresthedevil improved to 2-for-2 in her 4-year-old season. Along with the Oaks, the La Troienne was the second Grade 1 victory for Hot Springs co-owner Staton Flurry, whose biggest winner previously was the Cox-trained graded turfer Mr. Misunderstood. In her first start this year, Shedaresthedevil won Oaklawn's Grade 2 Azeri March 13 by a head over next-out Grade 1 Apple Blossom Handicap winner Letruska.

Cox posted six stakes victories at Oaklawn including bookend triumphs with Caddo River in the $150,000 Smarty Jones Jan. 22 and Fulsome, the latter in his first local start. Last year's