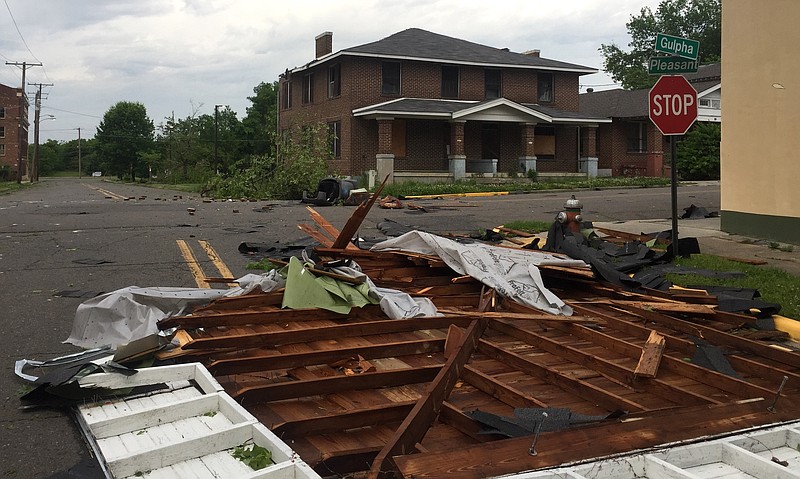 The city of Hot Springs has released an extensive list of 48 separate instances of damage caused by severe thunderstorms early Tuesday morning:

Freida and Richard; lines down.

130 Gardner, trees and lines down on house.

300 N Patterson; trees and lines down.

Hagen and Dawer, lines down.

Airport and Albert Pike; lines down.

West Grand and Summer; lines down.

Park and Stonebridge; tree down, but it has been removed.

Summer and Fourth; trees and lines down.

Audubon and Roberts; trees down.

Illinois, between Clara/Raymond; three trees down.

Rector and Garland; tree down.

Elmonte and Norwalk; trees and lines down.

Sixth and Kips Ally; lines down with tree.

200 Campbell; tree and lines down, barricades.

Ward and Summer; tree down.

Panda and Ward; tree down.

Grand and Summer; tree down (has been removed).

Gorge Road; tree down (has been removed).

Bellaire Loop and Fairoaks; utility pole down with trees.

Locust and E. grand; trees down and lines down.

Prospect and Robinson; line down but not in the road.

912 Garland; trees down and lines down.

Severe thunderstorms that rumbled through Garland County early Tuesday morning caused some structural damage to buildings in the Pleasant and Gulpha Street area of Hot Springs.

Roofing material is blocking one lane of Pleasant at the Gulpha intersection, and numerous trees were damaged in the area.

Some roads are also reportedly being barricaded due to storm damage.

More than 4,000 Entergy Arkansas Inc. customers in Hot Springs and Garland County were without power Tuesday morning following a round of severe weather.

Garland County was placed under a severe thunderstorm warning until 2:15 a.m. Tuesday, which was extended until 2:45 a.m.

In the latter severe thunderstorm warning, the National Weather Service said 70 mph wind gusts and quarter-size hail could be expected with the storm.

At 2:02 a.m., severe thunderstorms were located along a line extending from near Perryville to 8 miles south of Williams Junction to near Rockport, moving northeast at 55 mph.

While the outages were widespread in the county, most appeared to be in the north and east.

One of the largest, 721, affected the Fountain Lake area.

"Due to storm activity in your area, we are experiencing extensive power outages. Our crews are working to restore service as quickly as possible. We do not currently expect to have your service restored overnight. At this time, we cannot predict when your power will be restored. We will provide an estimated restoration time and other information about your outage as soon as it's available. We apologize for this inconvenience," the website said.