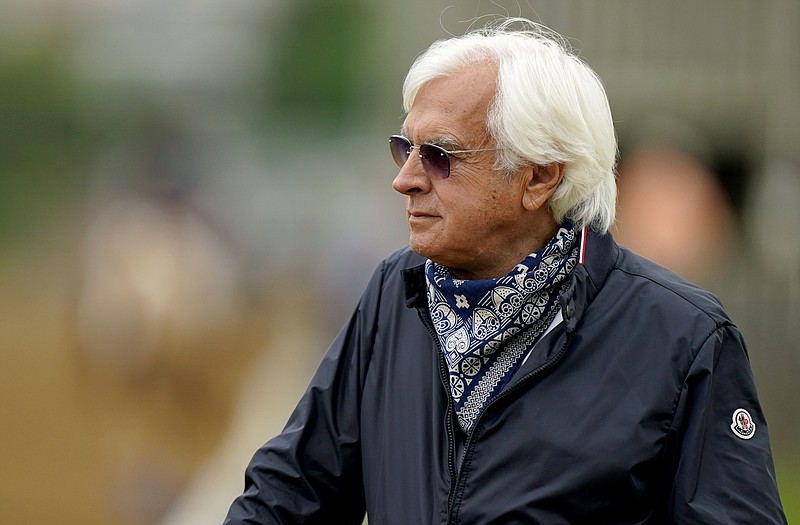 Trainer Bob Baffert watches workouts at Churchill Downs on Wednesday, April 28, in Louisville, Ky., prior to the 147th running of the Kentucky Derby on May 1. - AP Photo/Charlie Riedel

If it can happen at Churchill Downs on Derby Day, Oaklawn and other racetracks could experience the medication controversy like the one surrounding this year's Triple Crown.

But why does Bob Baffert's name keep coming up in these discussions?

Medina Spirit, a longshot winner May 1 at Churchill Downs, risks disqualification after a post-race blood sample revealed an overage for an anti-inflammatory agent. The Kentucky Horse Racing Commission announced that Medina Spirit tested positive for 21 picograms of betamethasone, which Baffert originally denied using but later said was found in a prescribed substance to treat skin irritation.

"I looked up a picogram to see how small it is," said Oaklawn President Louis Cella, "and I got lost after about the tenth zero."

Although Baffert, not wishing to create a "distraction" for his horses, will not attend the race, Medina Spirit and Oaklawn winner Concert Tour will represent him in the 146th Preakness on Saturday. Both horses, along with the filly Beautiful Gift, entered in the Black-Eyed Susan Stakes at Pimlico in Baltimore, will undergo blood testing, monitoring and a review of medical records by the Maryland Jockey Club, an MJC attorney said Tuesday.

The Kentucky Horse Racing Commission will make no official ruling on the Derby, the panel said, until a second sample is obtained from Medina Spirit. Runner-up Mandaloun would be declared the winner if Medina Spirit is disqualified, although no bets on the race will be affected. Mandaloun, trained by Brad Cox, is not running in the Preakness.

Baffert, who successfully appealed an Arkansas ruling that would have suspended the trainer and disqualified two of his horses from May 2020 Oaklawn victories, said, "Medina Spirit is a deserved champion and I will continue to fight for him."

Back at Oaklawn, where a weather-shortened meeting ended May 1, the track president and a racing official commented that Baffert is involved again in a medication issue.

"They had, what, 10 or 12 stakes on Oaks and Derby Day at Churchill Downs and they take three horses after each race for testing -- and this is the only horse that tested positive?" said state steward Hal Wiggins, a former trainer whose most famous horse, Rachel Alexandra, won the 2009 Kentucky Oaks for 3-year-old fillies.

According to Louisville-based website horseracingnation.com, Baffert has been linked to five high-profile drug investigations in the past two years, successfully appealing three of them, with the current Kentucky Derby case still pending.

"Why does his name keep coming up?" Wiggins said. "An everyday-Joe trainer with 10 or 12 horses wouldn't be able to hire the lawyers who can keep this kind of thing in court."

Hearing that Medina Spirit was treated with Otomax after the April 3 Santa Anita Derby, an ointment that contains bethmetasone, Cella asked, "Why's he even in the race (Preakness)?"

Baffert called for horse racing to "address its regulatory problem" regarding substances that "can innocuously find their way" into a horse's system at the trillionth of a gram level. "Medina Spirit earned his Kentucky Derby win," Baffert said, "and my pharmacologists have told me that 21 picograms of betamethasone would have had no effect on the outcome of the race."

Baffert, with a record 17 Triple Crown victories and two series champions (American Pharoah and Justify), has replaced Wayne Lukas as the most visible face in the sport. Lukas, preparing Oaklawn winner Ram for the Preakness, spoke of "knee-jerk" reactions within racing, partly in light of controversy by animal-rights activists over equine safety.

"We're trying to appease the public," said the 85-year-old Lukas, who introduced Baffert at the latter's Hall of Fame induction in upstate New York. "We're doing a lot of things that absolutely, probably are not in our best interest of racing."

Graham Motion, a Kentucky Derby-winning trainer like Baffert and Lukas, said in a Tweet on Sunday, "I would like to be optimistic about our sport, but today we are an embarrassment. Perhaps we have to hit rock bottom before things get better, but we only have ourselves and the leaders of the sport to blame. For anyone that loves the sport as much as I do, it's a sad day."

Although one high-profile case occurred late in the season on which he declined further comment, Wiggins reported a "very quiet" season in the Oaklawn stewards' room. Integrity protocols in place the last three or four years, allowing on-site inspections before a horse race at the track, have been heartily approved, he said.

"I've had horsemen from out of state tell me that we're doing in Arkansas what should be done in other states," Cella said.