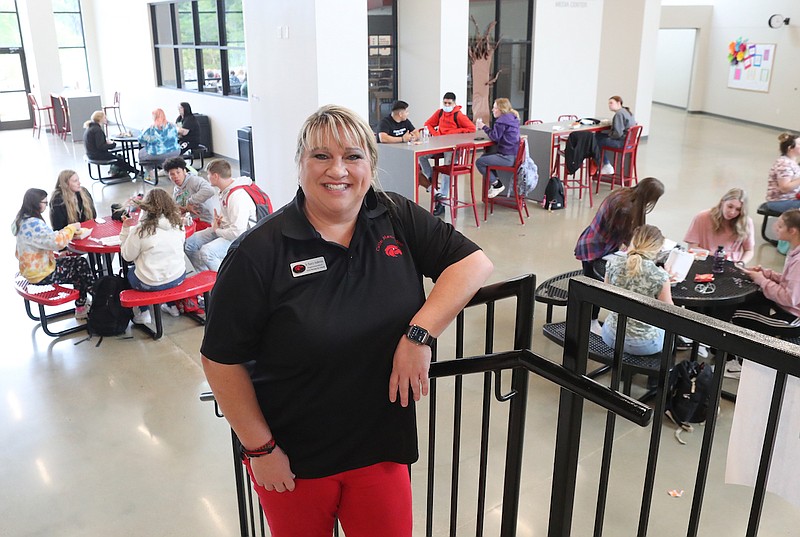 Anderson said that all the superintendents in the state had to learn and work together, and had to rely upon state leaders and organizations to help them with the decision-making process.

"It's been extremely stressful because it was uncharted territory. You didn't always know the right decisions because it's unlike anything we've ever dealt with," she said.

"Always putting the students first; their safety is our priority," Anderson said.

The district had to make some tough decisions, such as how they were going to implement protocols, social distancing, sanitizing, and hand-washing.

"There were a lot of decisions to make just on the safety aspect," Anderson said.

The district started talking about academics and how they were going to make that work with the students.

"It took a lot of teamwork. We were very blessed to have our ready-for-learning plan team to help us," Anderson said.

The district had strong and dedicated administrators working together, and they also had community and board input.

"There were just a lot of decisions, a lot of work, going into the plan, a lot of input, because we wanted everyone to feel safe, and everyone to feel like their child was getting a good education, whether it be face to face or virtual or the hybrid model," Anderson said.

She said that the changes that had to be made were a challenge for some teachers that were not as tech-savvy as maybe some of the other ones.

"It's all been a learning experience, and I'm very proud of the learning that occurred not only with the students but also with the staff," Anderson said.

"One of the things that negatively people would say is if Abraham Lincoln came back, the only thing he would recognize is the school system. Well, I would say that is no longer true because we do things so differently now than what we did a year ago."

Anderson said that good things came out of the pandemic; it has forced the district to grow.

"Our kids didn't struggle with the technology life, like the adults, but it's been an interesting year," Anderson said.

Anderson feels that the district has grown more this year as a profession than it has in the past. They learned how to do things more efficiently.

In Anderson's education career, she has had everything from traditional face-to-face learning to blended and to virtual.

Most people think that online classes are easy, and Anderson said she knows that is not the case because students do not always ask questions. And some versions are set up where individuals are just listening to information.

"The difference, in my opinion, is when students are on campus, they have more opportunity to be successful because that teacher is constantly there," she said.

In 2011, the district went into fiscal distress, leaving school officials with some hard decisions.

"Being (an elementary school) principal (at that time), I wasn't as involved in that, but I was involved probably more than most principals only because, at that time, I had returned to school to get my superintendent's degree," Anderson said.

During this time, Anderson had a good relationship with the previous superintendent.

"He and I work together very well. He had been the elementary principal before. I relied on him a lot for information."

She shared some of the information she learned in her classes with the previous superintendent to help the school with its problems.

"I was currently in those classes that gave me the opportunity to learn and actually put real-life situations about what was going on with Cutter with my professors and learn," Anderson said.

In 2012, the board was searching for a new superintendent. Anderson did not aspire to be a superintendent at all. She loved what she did. She loved being a principal; it was remarkably rewarding for her to see the students learned and the teachers excel.

"I loved being a principal," Anderson said. "I prayed really hard about it, and I was approached by some community members and family members ... it was a very hard decision."

Anderson ultimately chose to become superintendent because, with her insider knowledge, she felt she knew what needed to be done to get the school out of its predicament.

And, since Cutter Morning Star is a smaller school, Anderson would not have had the opportunity to work at district-level issues as a principal.

Being a superintendent was a difficult decision because it was twofold. She knew the district had a lot of things that needed to be corrected, academically, facility and financial-wise.

"I knew there were a lot of things that needed work. I'm not afraid of hard work."

But being a new superintendent, Anderson felt a little insecure, wondering if she would be able to do it. She knew it was going to be a challenge.

It was never "Did I think I could work hard enough? It was more about do I have the skills to do what had to be done," Anderson said.

Lance Robinson and Carl Hughes encouraged Anderson to apply for the position.

"I respected both of those men, and at the very last minute, I did apply. Again, it wasn't that I didn't want to lead; it was that I was young in my career," Anderson said.

"I was young, an inexperienced superintendent, and that was a big job. It came down to somebody having to step up and do it," she said.

"It was making those hard decisions to make that happen," Anderson said.

The first year, Anderson had to make reductions because the district was overstaffed, since they had lost students. It was hard for Anderson to sit across the table and tell an employee that they no longer had a job, especially since it was nothing that the employees had done. It was a choice that had to be made, and Anderson said she knows that they lost some good teachers in the process.

"That was one of the most difficult things I've ever had to do, and that was my first year as a superintendent," Anderson said.

"I knew I had to do that before I took the job. I knew that was part of the plan and what I was going to have to do, and so that weighed heavily on my heart," she said.

"It was just because we didn't have the money to continue to fund that many positions. So it was very hard," Anderson said.

"When someone is not doing their job and not performing well, and you have to have those hard conversations with them. In my mind, that's different," she said.

Anderson said that with the help of a strong board that supported all the hard decisions and phenomenal teachers that stayed with the district through the chaos, the district made it out of fiscal stress in 2012.

Anderson started at Cutter Morning Star in 2007 as an elementary principal, and she loved it. She loved working with teachers, parents and students.

Anderson had the opportunity, through the teachers, to have a chance to impact 300 to 400 students.