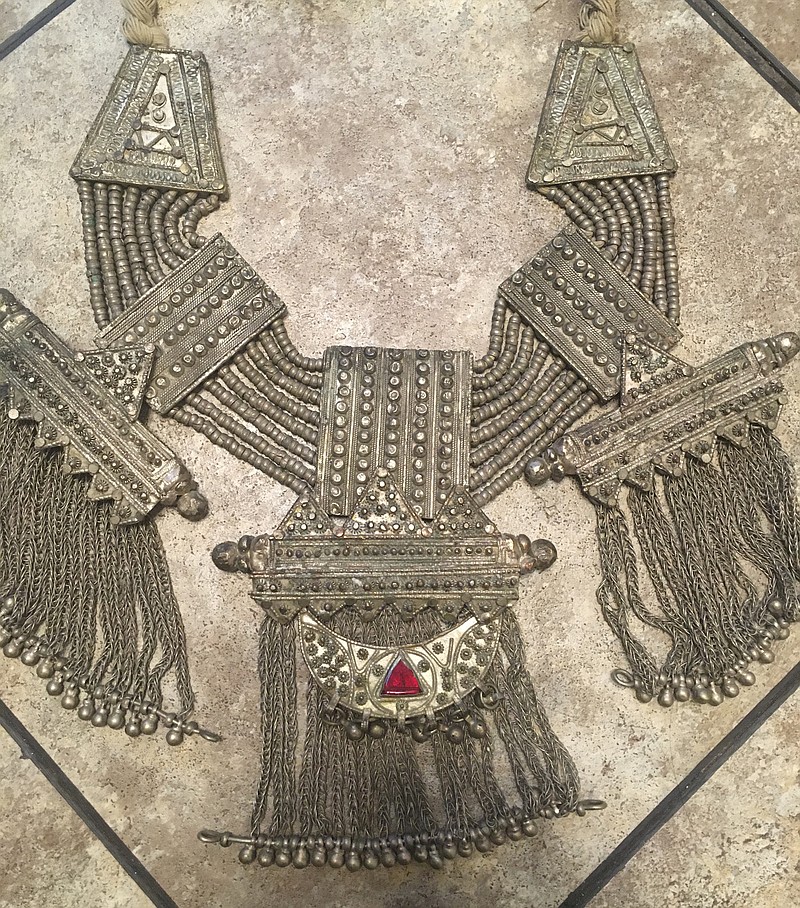 A turn-of-the-century Saudi Arabian Bedouin belt, which can also be worn as a statement necklace. - Submitted photo

The Bedouin are Arab nomadic camel and goat herding, desert-dwelling tribes that historically inhabited the Arabian Peninsula, which primarily comprises the country of Saudi Arabia. One of the most distinct aspects of the Bedouin culture is their heavy, chunky, dramatic, and eye-catching jewelry designs.

The pieces are most frequently composed of a mixture of silver alloy and other base metals and are often set with gemstones such as amber, turquoise, pearls, coral, agate or carnelian. They also include intricate beadwork and feature chain mail mesh, silver bells, coins, and a mace-shaped bead that is identical to beads seen in Greek jewelry from the 4th Century B.C. This suggests Greek roots for the jewelry designs. The same motifs can be seen in Bedouin jewelry designs spanning 6,000 years. Some of the silver used may have even come from one of the fabled mines of King Soloman.

Bedouin jewelry is rarely old. To find antique pieces, such as these from the turn of the 20th Century, is a treasure for collectors. A Bedouin woman's jewelry is usually given as a dowry for marriage and then melted down to be repurposed after her death.

Another interesting aspect of Bedouin jewelry is how nearly identical the pieces are to those of southwest Native American tribes as well as Mexican jewelry design. The theory is that Islam introduced the designs to Spain during the 800 years of Islamic rule, then Spanish conquistadors carried the artistic motifs and materials to Mexico, Central America, and the southwest United States. Prior to Spanish influence, there was no evidence of silversmithing jewelry or these kinds of motifs found among the native tribes. This just shows the interwoven web of global culture, especially in the history of jewelry.