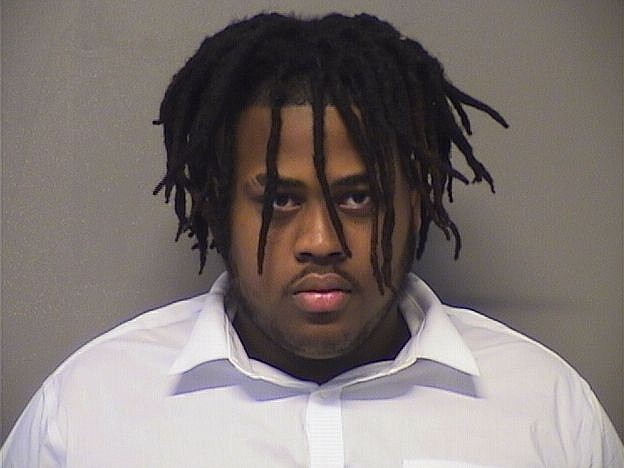 One local teen was arrested and two suspects are being sought for allegedly shooting two other local teens multiple times as they attempted to hide in a car outside a club early Sunday, Hot Springs police reports say.

Officers located around 160 shell casings at the scene, from various caliber weapons, including 12-gauge shotgun shells, 9-mm, .40-caliber, .45-caliber and 5.7 caliber shells, according to the probable cause affidavit.

Dyonsae Merraye Famous, 18, who lists a Richard Street address, was taken into custody shortly after 11:30 a.m. Sunday at the Holy Ghost Headquarters Church, 1878 Hobson Ave., and charged with two counts of committing a terroristic act, each punishable by up to life in prison, and two counts of first-degree battery, each punishable by up to 20 years.

Famous, who has felony charges pending from allegedly shooting another juvenile in the head in a drive-by shooting last year, was being held on a zero bond and was set to appear Monday in Garland County District Court.

Hot Springs police found the shell casings when they responded to 123 Albert Pike Road regarding a report of shots fired at around 2:07 a.m. Sunday, according to the affidavit.

Both victims were airlifted to Arkansas Children's Hospital in Little Rock for treatment of their injuries.

The male victim told officers he was at a club at 123 Albert Pike when the shooting started. He stated he had some problems with "three armed males" inside the club including Famous and two other known suspects.

As he was walking out to his vehicle, the three armed males started shooting in his direction, he said, with Famous shooting a 12-gauge shotgun and the other two suspects firing handguns.

He said he and the female victim "took cover" in the rear passenger seat floor of their vehicle, a 2004 Ford Focus, and both were struck by several rounds.

Famous was previously arrested on Dec. 5, 2020, in connection with a drive-by shooting on Dec. 2. He was charged with first-degree unlawful discharge of a firearm from a vehicle, punishable by up to life in prison, and first-degree battery, punishable by up to 20 years. He was released on a $100,000 bond on Dec. 15 and pleaded not guilty to the charges on March 1. A disposition hearing on the charges is set for Aug. 21 in Garland County Circuit Court.

According to the probable cause affidavit on those charges, on Dec. 2, HSPD detectives responded to NPMC and made contact with the victim, 16, who was suffering from a gunshot wound to the head. The victim was alert and able to tell Detective Mark Fallis he was standing outside a residence at 302 Potter St. helping his mother get dinner out of the car.

He said he saw a car driving down the street with its headlights off. As the car passed, he said he saw the driver, whom he recognized as Famous, point a gun at him and fire, striking him in the head.

A female witness who was also standing outside the residence told police she saw a car driven by Famous "riding by slowly." She noted she had seen Famous riding slowly through the area several times and knew him "to have an issue with the juvenile victim."

As the car passed the residence, she said she heard a loud gunshot and saw the juvenile get hit. She said she then drove the victim to NPMC. The victim, in critical condition at that time, was later transferred to a hospital in Little Rock for further treatment and an arrest warrant was issued for Famous.