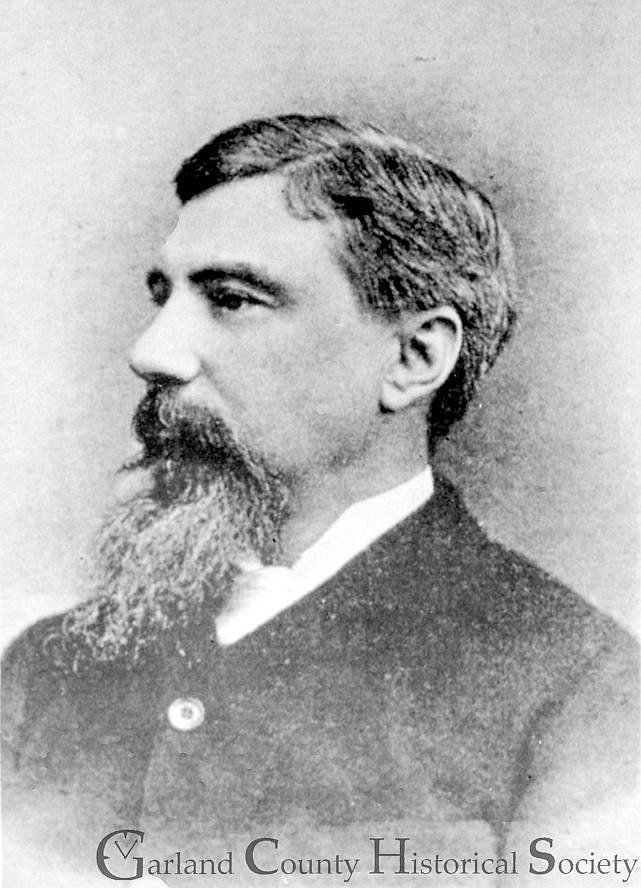 Late one night in 1863, an exhausted Union cavalry officer searched crowded Nashville, Tennessee, for a hotel room. A clerk at the Commercial Hotel took pity on him and offered to let him use his own cot. The officer later wrote, “I was so grateful for this act that later on I lent him some money which gave him a start in life.” The officer was Samuel Fordyce. The young clerk was Samuel H. Stitt.

In 1873, Fordyce first visited Hot Springs. When he checked into the Hot Springs Hotel, he was delighted to see that its co-owner was young Stitt. Fordyce decided to relocate to Hot Springs and became a major force in its development. Less well-known today, Stitt was also a key figure who helped establish Hot Springs as a premier resort city.

Impressed by the possibilities of what was then a small, wooden, ramshackle town, Stitt had settled in Hot Springs around 1868. With Maj. William H. Gaines, in 1870 he built the Hot Springs Hotel, our first modern hotel and the largest at that time. But Stitt and Fordyce saw a need for even grander hotels here, so they partnered in the building of the first Arlington Hotel.

The graceful wood structure, with 200 guest rooms, was the largest hotel in Arkansas. In 1892, they razed that Arlington and erected the red-brick second Arlington for the colossal price of $550,000. For many years, the only year-round hotel in Hot Springs, the hotel welcomed Bat Masterson, Babe Ruth, Gen. John Pershing, Jack Dempsey, Andrew Carnegie, and other notable figures. Stitt was its chief executive officer until his death in 1913.

As his obituary noted, Stitt had always “steadfastly believed in the future of the resort.” He had proved that by investing whole-heartedly in it. He owned part of the Mountain Valley Water Co., the street car company, the splendid Eastman Hotel (which he managed), the Big Iron Bath House, Hot Springs Country Club, and other local enterprises. He was a founder of Arkansas Bank and Trust Co. He joined the first volunteer fire company in 1877 and was an active Mason and member of St. Luke’s Episcopal Church. He was a founder and president of the Business Men’s League. And, in 1875, he found personal happiness when he married Maj. Gaines’ daughter, Augusta, with whom he had five children.

Looking for a trace of Stitt today? See the Stitt-Patterson House at 824 Park Ave. Completed in 1877 and on the National Register of Historic Places, the two-story wood home is a beautiful example of eclectic Victorian architecture. Then go to 516 Central Ave. and see the tooled limestone 1895 Stitt Building, one of only two structures downtown with a stone facade. The building has housed the Clyde Hotel, Moses Mendel’s dry goods store, and Taylor’s Art Gallery, among others, and now is the home of Petals, Purse, Etc.

Stitt changed Hot Springs by providing accommodations suitable for a first-class resort. He also was one of the pioneers of modern marketing techniques and understood what a city needs to provide for its visitors. One of the visionaries who created the modern hotel industry, Samuel H. Stitt deserves to be remembered by the city he did so much to create.