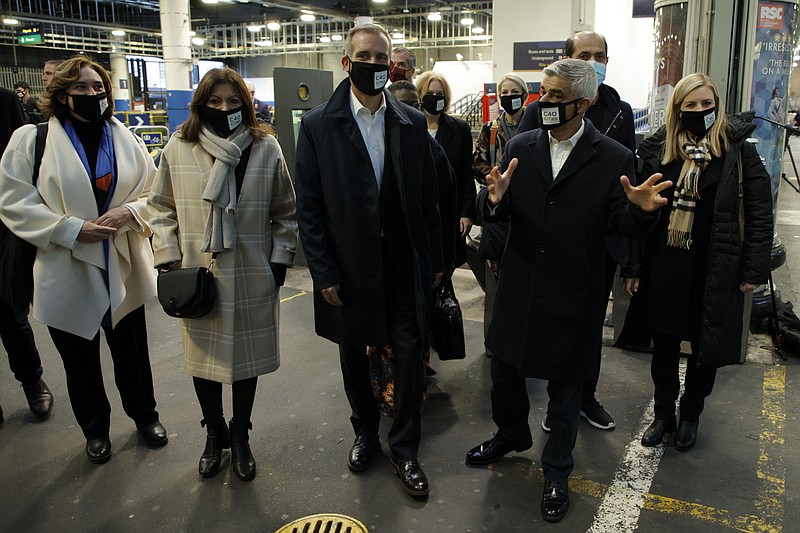 GLASGOW, Scotland -- On a train hurtling toward Glasgow, the mayors of Seattle and Freetown, Sierra Leone, greeted each other like long-lost sisters, bonded by years of Zoom calls and collaboration in the fight against climate change.

They lead cities on different sides of the economic and climate divide -- one in the cool, northwestern corner of the one of the world's richest nations; the other the capital of an impoverished country in the tropics of West Africa.

But Seattle Mayor Jenny Durkan and her Freetown counterpart, Yvonne Aki-Sawyerr, are both on the front lines of global warming, working to ensure their cities are prepared for rising sea levels, torrential rains and extreme heat.

On Monday, they traveled to the U.N. climate conference in Scotland with a group of big city mayors to demand that world leaders follow the science and act now to head off a catastrophic increase in global temperatures.

Aki-Sawyerr describes herself and mayors as the captains of small boats trying to warn an ocean liner of the dangers ahead.

"I'm going to stand on top of the bow and I'll be waving my hands furiously and I'm going to be saying, 'Look over here, you're hitting an iceberg and you need to stop now,'" she said. "And I'm hoping that there'll be enough of us doing the same thing for it to make a difference."

Aki-Sawyerr and Durkan are part of a delegation from the C40 group of big city mayors who are demanding that they be included in decisions about how to combat global warming and mitigate its effects. City leaders will be asked to implement many of the decisions made by presidents and prime ministers, so they should be consulted and receive funds to do the job, the group says.

The delegation also included the mayors of Los Angeles, Paris and London, as well as the Nordic cities of Oslo and Stockholm, and North Dhaka in Bangladesh.

The mayors sought to underscore their environmental credentials by making the 645-kilometer (400-mile) journey from London to Glasgow by rail. The electric train they traveled on generates about seven times less greenhouse gas emissions per passenger than flying.

Together, the C40 group's 97 members are home to more than 700 million people, or almost 10% of the world's population. Their organization also tries to help local communities, backing a program in which over 1,000 communities supported a campaign for a "net-zero" emissions future.

The mayors aren't alone in saying that cities will play a big part in the fight against climate change.

More than half the world's population now live in urban areas, and the trend is only going to continue. Despite the economic shock caused by COVID-19, cities are still seen as gateways to a better life because density and diversity lead to creativity and innovation, said Bernice Lee, director of futures at Chatham House think tank in London.

"Crucially, around 80% of emissions come from the planet's cities, so they really have to be part of the solutions, and decisions made in major cities really matter," Lee said. "They can be great environments for both testing and piloting the next generation of solutions."

The U.N. climate conference, known as COP26, comes just two months after an international panel of climate scientists said time was running out to meet the goal of limiting global temperature increases to 1.5 degrees Celsius (2.7 degrees Fahrenheit) and avert catastrophic climate change. While organizers say Glasgow is the last best chance for an agreement to slash greenhouse gas emissions, some world leaders, including Presidents Xi Jinping of China and Vladimir Putin of Russia, have decided not to attend.

China is the world's biggest emitter of greenhouse gas emissions, followed by the U.S., the European Union, India and Russia, according to the International Energy Agency.

Freetown is already seeing the impacts as a changing economy collides with global warming.

Increased migration from the countryside is forcing people to build informal settlements near coastal mangroves and on hillsides around the city, which destroys forests and worsens floods during heavy rains. More than 1,000 people were killed by a mudslide in 2017.

In response, the city is planting trees and working to improve sanitation and flood mitigation projects, Aki-Sawyerr told the U.N. Environment Program. One program gave tricycles to youth groups who collect household waste, which is then composted and returned to urban farmers.

"There are billions of people in the global south for whom climate change impacts are happening today. Now. Those livelihoods are being destroyed," Aki-Sawyerr said. "These are the smaller, smaller emitters ... and yet the consequences are dire."

But the fight against climate change is also taking place 6,700 miles (10,800 kilometers) away in Seattle.

Temperatures in Seattle, known for cloudy skies and drizzling rain, rose above 100 F (38 C) on three consecutive days in June as a mass of hot air sat over the western U.S. and Canada. On June 28, the temperature reached 108 degrees F (42 C), the highest in 151 years of detailed record-keeping.

The state of Washington recorded 138 heat-related deaths this summer compared with seven the previous year.

While scientists are hesitant to link any single weather event to global warming, Seattle officials are preparing for rising sea levels, higher tides and more frequent and longer-lasting heat waves.

Seattle maintained its commitment to the Paris Climate Accord after former U.S. President Donald Trump pulled out of the deal. The city promotes public transportation, cycling and walking as alternatives to solo car journeys and is working to increase energy efficiency in public and private buildings.

"Mayors are the front line in their cities for everything from who picked up the garbage or didn't," Durkan said.

"Policy at the national level and central government level -- their biggest challenge is how to implement it? What does that mean? Boots on the ground? Our first thought is, how do you implement and what does it mean to real people?" 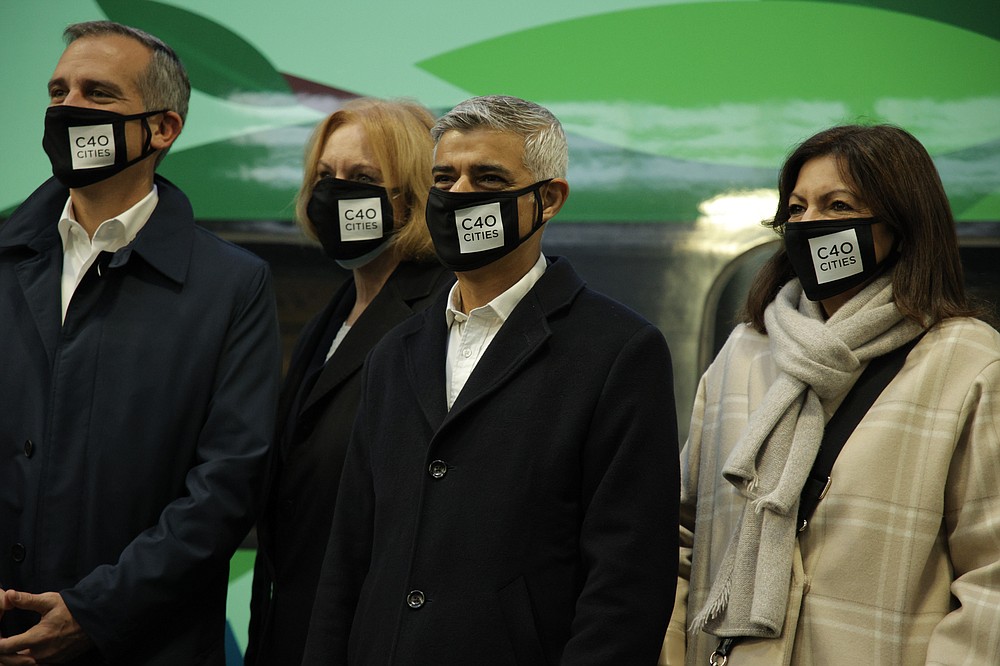 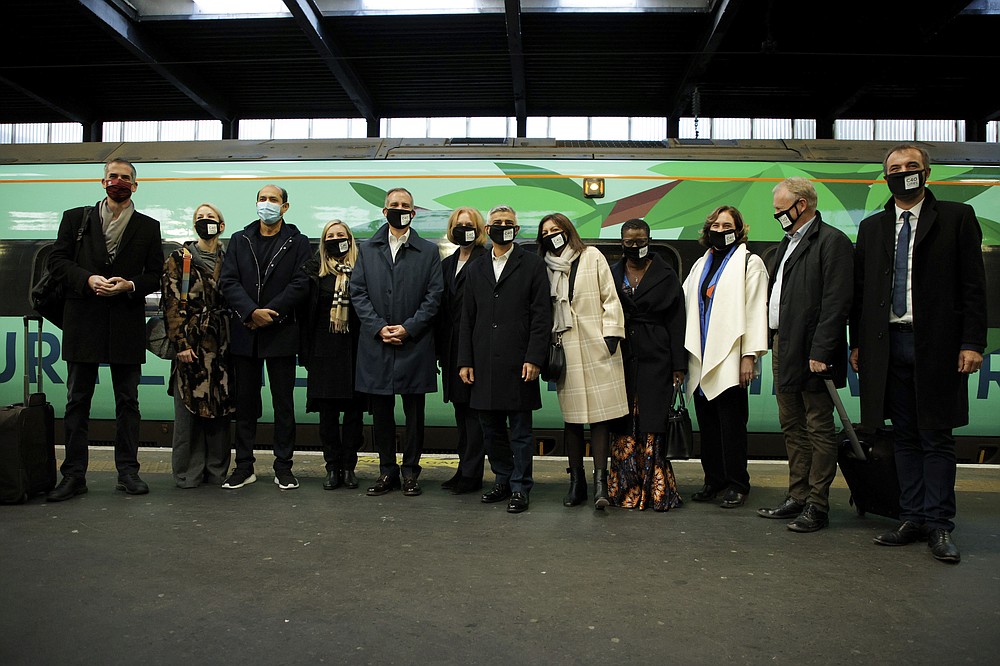 Mayor of London Sadiq Khan, centre, poses with a delegation of mayors from the cities of Athens, Stockholm, North Dhaka, Phoenix, Los Angeles, Seattle, Paris, Freetown, Oslo, Rio de Janeiro and Barcelona beside a train at Euston Station in London, taking them to the COP26 U.N. Climate Summit in Glasgow from Euston Station in London, Monday, Nov. 1, 2021. A formal opening of the summit yesterday kicked off two weeks of intense diplomatic negotiations by almost 200 countries aimed at slowing intensifying global warming and adapting to the climate damage already underway. (AP Photo/David Cliff)