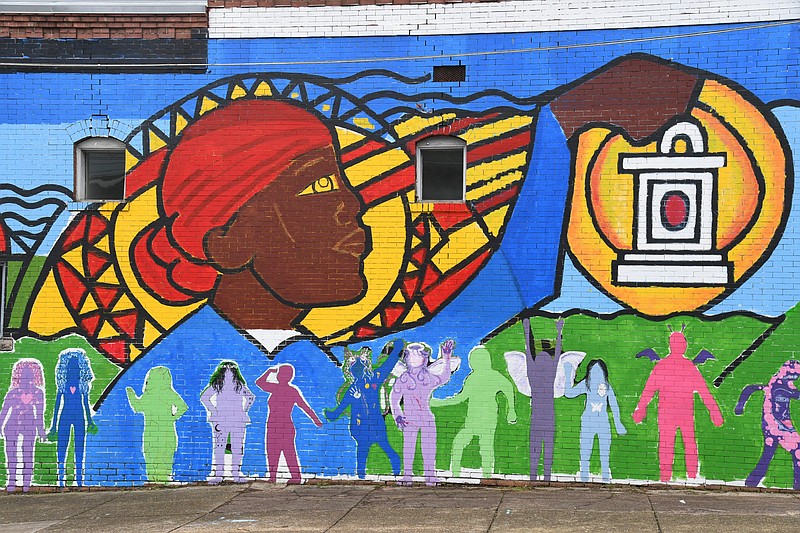 “Freedom,” by artist Perrion Hurd, is being created to honor Harriet Tubman at the corner of Market Street and Central Avenue. - Photo by Tanner Newton of The Sentinel-Record

With Hot Springs' latest mural nearing completion, the Harriet Tubman-inspired artwork is set to be unveiled in two weeks.

"Freedom" is being created by Little Rock-based artist Perrion Hurd at the intersection of Market Street and Central Avenue. At 2 p.m. Sunday, Nov. 21, the mural will be unveiled to the city at a ceremony at the nearby Central Theater.

The mural, which features Tubman holding a lantern over a line of people, is directly across Central from Confederate Square.

While the design, and much of the brush strokes, are Hurd's, many other artists have helped bring the painting to life, including students from Hot Springs World Class High School, who helped paint the people Tubman is leading, and members of the general public Hurd invited to contribute to the piece. At Gallery Walk on Friday, attendees were allowed to paint several brush strokes.

"Oh, it's beautiful. Perrion Hurd is such a fabulous artist and he's been doing a fantastic job," she said.

Zunick said from the start it was Hurd's idea to allow others, such as the students, to help him paint it.

"They're our next generation of artists," she said.

Letting the students help, Zunick said, has several benefits. "First of all, it shows all of them, in Hot Springs, we value art," she said, and by helping paint a mural downtown, they will always be able to see they contributed to a public piece of artwork.

Zunick, who also took a turn painting on the mural, said that in letting everyone participate who wants to, the mural shows "art is for everyone."

The subject of the mural was also something Zunick said she likes.

"Harriet Tubman is such a hero, she showed great heroism," Zunick said, noting after she escaped slavery, "she went back and brought others to freedom. She overcame such horrendous obstacles and to not only show personal heroism but to help others, as well."

According to Carter, "Stand UP incorporates music, song, dance, and spoken word to celebrate the legacies of women and men who have paved the way before us. The performance includes a lineage tribute to Harriet Tubman and her indirect connection to the social justice emphasis embedded in the ideals of Philander Smith College," the release said.

The mural "is significantly funded through private donations, the remainder of the funding comes from a grant from the Arkansas Humanities Council and the National Endowment for the Humanities," the release said.