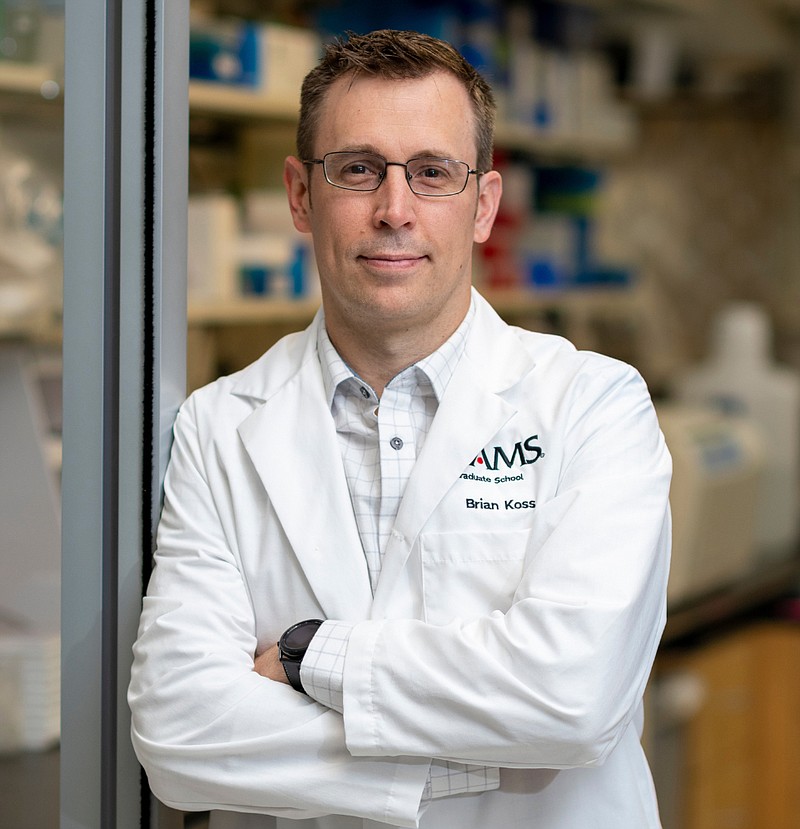 Koss joins a group of only 13 2021 NIH Director's Early Independence Award recipients in the U.S. from such institutions as Stanford, Harvard, Johns Hopkins, Mount Sinai, Vanderbilt and Columbia. He will receive a five-year, nearly $1.9 million grant to fund his highly specialized cancer research at UAMS.

"This award provides a tremendous opportunity to expand my research on immune-based therapies for cancer," Koss said in the release. "I plan to use the Early Independence Award to build a team of researchers who will be crucial for establishing an innovative and collaborative research laboratory."

In addition to being the first Arkansan to receive the award, Koss is only the second recipient from an NIH-designated Institutional Development Award state, a group of 23 states plus Puerto Rico that have historically received lower research funding.

"The NIH Director's Early Independence Award is one of the most prestigious awards given by the NIH to the most promising young scientists across the country," Dr. Michael Birrer, UAMS vice chancellor and director of the Winthrop P. Rockefeller Cancer Institute. "Dr. Koss' research will be a key supporting component of taking the Cancer Institute to NCI designation in the near future."

"We are thrilled that Dr. Koss is Arkansas' first recipient of this prestigious and transformative award," Dr. Susan Smyth, executive vice chancellor of UAMS and dean of the College of Medicine, said in the release. "All of us at UAMS look forward to watching Dr. Koss' ingenuity and hard work lead to meaningful advances in the understanding of the immune response to cancer, and potentially to effective new treatments for cancer patients."

"This award demonstrates how exceptionally promising the NIH considers Dr. Koss, and how confident the NIH is in the supportive environment at UAMS and the Winthrop P. Rockefeller Cancer Institute," Smyth said. "Dr. Koss has superb mentors in the Cancer Institute and College of Medicine."

"Unique to Koss' research is the use of proteomics -- powerful computing tools that help make sense of enormous amounts of biological data. This includes creating functional maps of cells and other techniques that lead to better understanding of the molecular pathways in cancer and other diseases. UAMS is home to the NIH's only national proteomics resource, the IDeA National Resource for Quantitative Proteomics. Koss will use proteomics to study protein turnover rates on a massive scale," the release said.

"Dr. Koss performed his graduate work in my laboratory, building a program that focused on how the environment in solid tumors creates unique challenges for immunotherapies," Alan Tackett, deputy director of the Winthrop P. Rockefeller Cancer Institute and one of Koss' mentors, said in the release. "He will now translate his graduate work to build an independent research program at the Cancer Institute, focusing on how to better understand and engineer the immune system to recognize and eliminate tumors from the body."

A Mountain Home native, Koss completed his undergraduate degree in biology at Hendrix College in Conway, where he got his first exposure to undergraduate research. Cancer became real to Koss when he worked as a research technician at St. Jude Children's Hospital in Memphis after college. He returned to Arkansas in 2015 to begin graduate studies at UAMS and earned a Ph.D. in 2020.

In 2021, the National Institutes of Health awarded 106 grants through its High-Risk, High-Reward Research program. "Examples of supported research include understanding how long-term memory might be encoded in the shape of folded DNA in our neurons, mining data from unconventional sources to reveal social determinants of suicide, establishing new paradigms to address the functional consequences of health disparities in drug development and looking at the impact of high school and collegiate athlete injuries on long-term health. The 106 awards total approximately $329 million over five years, pending available funds," the release said.