WATCH: GC Library set to 'Send Some Cheer' this season 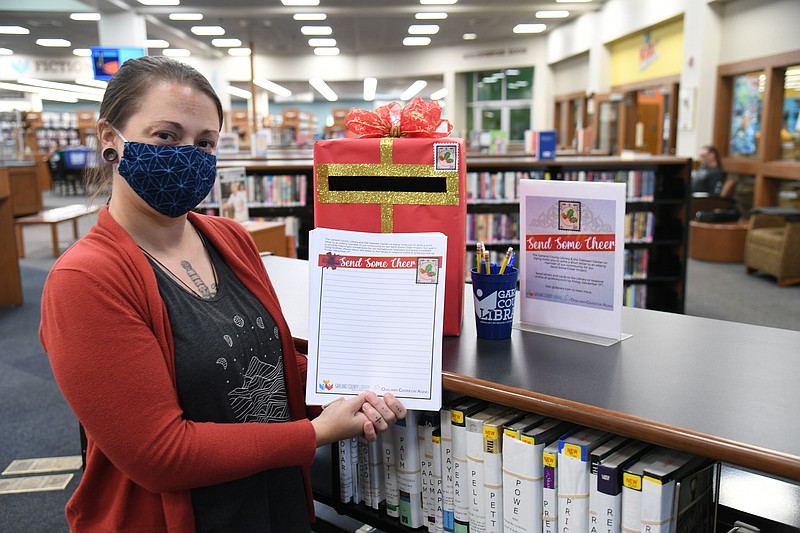 Erin Baber, public relations/marketing coordinator for the Garland County Library, holds blank letters that the public can fill out and send to someone for the “Send Some Cheer” program. - Photo by Tanner Newton of The Sentinel-Record

Hoping to spread some holiday cheer, the Garland County Library and the Oaklawn Center on Aging are bringing back a program to allow community members to send short letters and cards to area seniors.

"Send Some Cheer" is patterned after the library's "Send Some Love Project" from February.

Erin Baber, public relations/marketing coordinator for the library, said that the previous attempt at the program was a success, and that they are hoping for this one to be even bigger.

The program, Baber said, is meant to "reach out to some people who had been even more adversely affected by the pandemic." The first program "had a goal of 150 pieces of mail or letters," she said, noting that they "just barely hit that goal."

"We'd like to at least do that again for 'Send Some Cheer,'" Baber said. "This time though, we're encouraging kids in school to make cards and just something that we can give to patrons that are still kind of isolated," she said.

"They don't have to be anything long. We requested not to put too much personal information because it's not, for privacy reasons, it's not really correspondence because we're not getting anything back from the people who are receiving these cheerful messages," Baber said.

Letters for the first program, Baber said, "ranged from just encouraging words to personal-ish stories that weren't identifiable, talking about how spring is their favorite time of the year."

Baber said that those who wish to participate do not have to actually write out a letter -- "people can go to our website, https://gclibrary.com, and there's a banner image on our website and they can just click it and fill out a Google form," she said. Those who wish to actually write their letter can pick up a blank form at the library, 1427 Malvern Ave., and drop the letter off in a box near the entrance of the building.

"When we put it out we did get some questions from teachers about if their classes could participate," Baber said.

Baber said Friday, "We started this the beginning of the month, so we're only a few days into it, and I think we've got about over a dozen already, with more coming through classrooms and youth programs."

"A few patrons who have asked that we can mail something to one of their loved ones who are homebound or unable to really get out and I think that's a great idea, so we've taken a few of those requests online. Just a way to connect with people who might not get to see or be around many people over the holiday," she said.

"The pandemic has caused cancellations and delayed events that kept many people apart even into this year," Garland County Library Children's Programmer Brook Olsen said in a news release.

"Sending some cheer to those who are otherwise isolated this holiday season is a small thing we can do to show them we care and to hopefully brighten a person's day," she said.

"For this reason, the Library has partnered with the Oaklawn Center on Aging to provide handwritten notes, postcards, and holiday cards to our homebound and assisted living residents."

Baber said that the Center on Aging will pass out most of the letters and cards. The deadline to turn in letters Friday, Dec. 17.