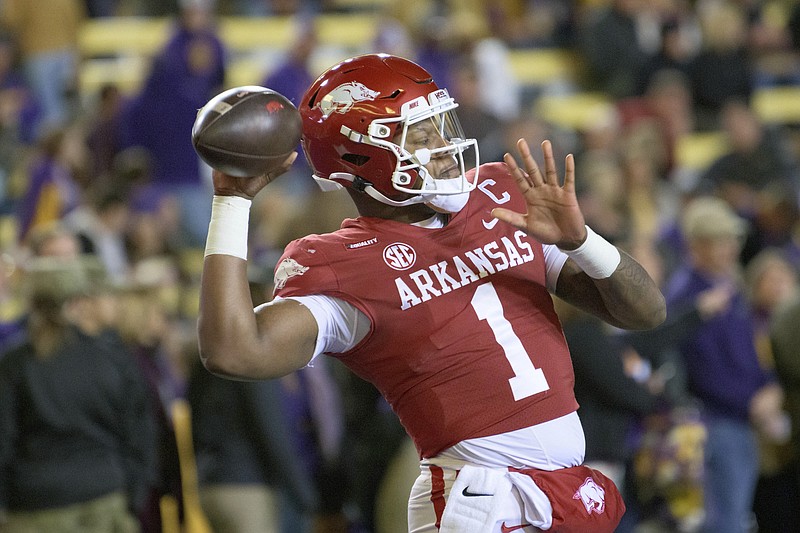 To have won only four football games in Death Valley, LSU's Tiger Stadium, the Arkansas Razorbacks have compiled some keepsake memories. Especially in the north end zone.

It was there that Matterral Richardson, one of the team's least likely heroes, picked off a wayward pass in the third overtime on Thanksgiving Friday 2007. That closed out a 50-48 victory over top-ranked LSU in what proved the last Razorback game coached by Houston Nutt. A native son who lost a battle of rising expectations, Nutt was off in a few days to Ole Miss, his "golden chains" loosened by the headline-seeking UA chancellor. Razorback fans merely shrugged, welcomed a hired-gun coach, Bobby Petrino, and flirted with the big time until the coach went motorcycle riding one Sunday.

In the same patch of ground as Richardson's pick, Montaric Brown came up with Arkansas' biggest play Saturday night. In another overtime game, Arkansas went on defense right away and watched LSU drive deep. Then, one play after a 24-yard completion, LSU freshman Garrett Nussmeier went for Devonta Lee in the right corner of the end zone. Brown had inside position and came down with the Hogs' third takeaway of the night and his fourth interception of the season.

Taking no chances, K.J. Jefferson set up Cam Little for a 37-yard field goal that split the posts. Thus did Arkansas, by 16-13, take home the Golden Boot trophy for the first time since a Bret Bielema-coached team won at Baton Rouge in 2015. Arkansas' first win at Tiger Stadium came under Danny Ford in 1993, the Hogs' second year in the Southeastern Conference.

For Sam Pittman, the victory evened the second-year coach's Razorback record at 10-10. Currently 7-3, Arkansas improved its chances to play in a splashy bowl game. This after becoming bowl eligible for the first time in five years with a close call against Mississippi State, 31-28.

"It's nice to be a Hog now," Pittman told SEC Network reporter Tera Talmadge leaving the field. That after a four-quarter struggle, he sad, that "some of our defensive guys did a better job than some of their coaches."

Arkansas gained only 101 yards in the first half, 28 of that on the last play. That the Hogs trailed only 10-3 stemmed largely to a missed field goal that would have put LSU, a rare home underdog, up by 10. After Max Johnson worked the first two series, lame-duck coach Ed Orgeron turned to Nussmeier, who found Jack Bech in back of the end zone for 29 yards and the Tigers' largest lead.

LSU shut down an Arkansas attack averaging 243.8 land yards to almost nothing. Jefferson, for once, appeared frazzled and was ineffective. Favored receiver Treylon Burks had only two first-half catches for 5 yards.

Jefferson has had more prolific games than 142 yards passing (18 of 25) and 41 rushing but none in which ball protection mattered more. Though sacked three times, he shook loose other times when collared in the backfield. One such play resulted in the Hogs' only touchdown, a 43-yard throw to a wide-open Dominique Johnson after escaping the clutches of Damone Clark. Little's extra point made it 10-10 with 6:01 in the third quarter.

The key stat: Jefferson neither fumbled nor was intercepted on a perfect night for the Razorback offense.

Arkansas' defense made plays that stuck, few bigger than Myles Slusher's first-down pick at the Hogs' 37. A 23-yard fake punt by holder Reid Bauer, when Arkansas sent the field-goal unit out, led to a 27-yard Little boot for 13-10. LSU converted a fourth down on its next drive, netting a tying 48-yard kick by Cade York, who earlier missed from 55.

Then came overtime and the play by Brown, often an enemy target this season, but here invoking memories of what Ken Hatfield said about his defense, "The next play belongs to us."

To that end, linebackers Bumper Pool, Grant Morgan and Hayden Henry dominated the tackle charts with 13, 11 and 10 stops, respectively. Joe Foucha recovered a fumble deep in LSU territory. LSU outgained Arkansas by 25 yards and had the ball more than five minutes longer but could not deliver a dagger blow.

Arkansas may have had more prolific kickers than Little (one with the same last name comes to mind), but few whose boots made the scoreboard difference as his against Mississippi State and LSU.

Now comes Alabama, which has beaten Arkansas the last 14 years under Nick Saban. This is one that even the diehards have written off, seeing the Hogs as an 8-4 team (after beating Missouri), which seemed utterly preposterous in August. This may not be Saban's greatest team but it's still 9-1 and playing at home before more than 100,000 fans.

So get your pacemakers checked and stock up on tranquilizers. Nothing is as we know it in a college-football universe that Ole Miss beats Auburn with defense ("period, point-blank simple," said Chizik) and Kansas tops Texas at Austin without Bill Self involved. Not to mention when an Oklahoma coach squawks about a "code of sportsmanship" when the other team scores late to improve its point differential.