A Saturday to treasure in Arkansas 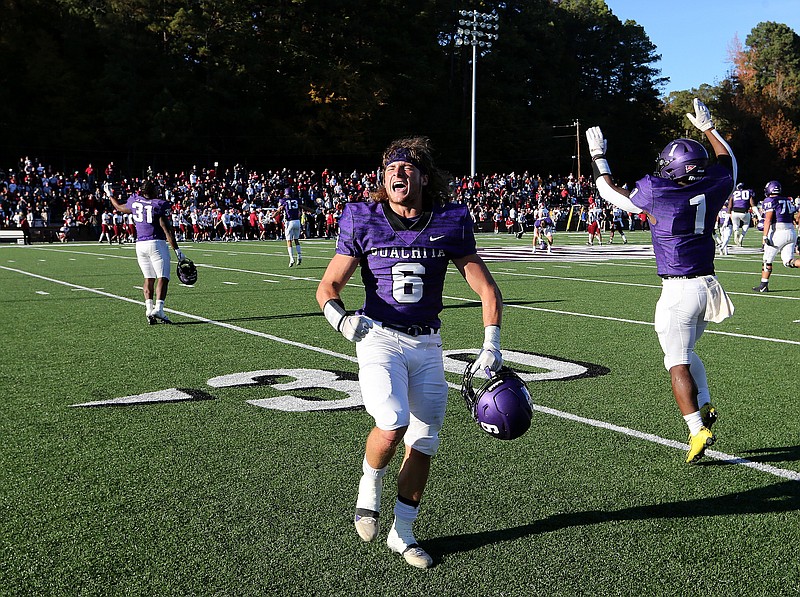 Ouachita Baptist wide receiver Connor Flannigan (6) celebrates after time expires in the fourth quarter of OBU's 31-28 win in the Battle of the Ravine on Saturday at Cliff Harris Stadium in Arkadelphia. - Photo by Thomas Metthe of Arkansas Democrat-Gazette/Thomas Metthe

Long before the Baton Rouge precinct reported late in the night, many Arkansas football fans enjoyed their sports Saturday immensely.

The Razorbacks' 16-13 overtime victory over LSU in the Golden Boot game capped an emotionally draining day of football watching. (How many times can one watch the commercial that the Little League baseball player breaks his dad's windshield?)

For 9,458 fans at Cliff Harris Stadium in Arkadelphia, Henderson State and Ouachita Baptist penned another chapter in a book we never get tired of reading. The 94th Battle of the Ravine had another storybook ending: Hometown boy (sophomore Gabe Goodman) kicks game-winning field goal in final minute. A Hollywood script writer on an opium jag would be hard-pressed to come up with something better.

Ouachita, for the fifth meeting in a row, kept bragging rights in the series, winning 31-28 in an outcome much cheered by Harding fans. Henderson needed a victory to match Harding's 10-1 Great American Conference record on a day that the Bison beat Arkansas Tech 31-0 in Russellville. Instead, the Arkadelphia schools finished a game back at 9-2, Henderson losing a close one after winning three road games by a total of eight points.

"We've been on both sides of those," Reddies coach Scott Maxfield said. "We've probably rolled the dice too many times."

Maxfield called a timeout to ice Goodman before his fateful kick. Earlier, the kicker doinked a 45-yard attempt off a cross bar. Hayden Lassiter, his holder, convinced coach Todd Knight that Goodman deserved a second chance. Goodman, who has been nursing a sore calf for several weeks, promptly entered series lore.

Asked his thoughts, Goodman said, "Really, this is going to sound corny, but I was thinking about the seniors. All of those guys support me. I love 'em. I just went and kicked the ball."

Yes, it sounds corny, but anyone who has ever shared a college dorm and attended classes with football players can relate. For every Ouachita fan who screamed into the night, a Henderson rooter silently wished to slit his wrists. Hopefully, no one went to such extremes on another glorious Saturday that one Arkadelphia team walked across the highway to face its rival. Same two teams next year.

Harding is the only GAC team to earn a NCAA Division II playoff appearance, the Bisons earning a No. 2 seed and a home game against Washburn (Topeka, Kan.) at 1 p.m. Saturday in Searcy. (I can resist the urge no longer: Alma mater, hail!)

Baton Rouge wasn't the only Louisiana site that an Arkansas team won Saturday. Arkansas State snapped an eight-game losing streak with a 27-24 comeback victory over Louisiana-Monroe. The Red Wolves had gone since their Sept. 4 opener against Central Arkansas without a victory under first-year coach Butch Jones. Layne Hatcher, a former Pulaski Academy quarterback under Kevin Kelley, had 34 completions, three on a late drive of 55 yards.

As did Cam Little for Arkansas and Goodman for Ouachita, Blake Grupe nailed a 42-yard field goal with 1:17 to play. cornerback Samy Johnson grabbing a ULM deep throw to preserve the victory. Although its defense has been maligned at times, the Red Wolves played Sun Belt Conference rival Louisiana-Lafayette close (28-27) on a Thursday-night game in Jonesboro on ESPN.

"The more you invest, the harder it is to surrender," Jones said after his first SBC win. "Just the look in their faces and the excitement ... to sing the fight song, those are the things that you'll remember."

Two in-state home teams lost, Central Arkansas to Stephen F. Austin, 27-14, and Arkansas-Pine Bluff to Florida A&M, 37-7. The latter game matched two Southwestern Athletic Conference schools that have played Arkansas at War Memorial Stadium, the Golden Lions in October as the University of Arkansas lifted a 70-year Iron Curtain against in-state rivals. The spirit of good will present that day mattered much more than the 45-3 score in Arkansas' favor.

Although their heroes are one play from an 8-2 record, Razorback fans look with trepidation upon what's next. No. 2 Alabama awaits at 2:30 p.m. Saturday at Bryant-Denny Stadium in Tuscaloosa, Ala. Closing in on another Southeastern Conference Western Division title, bringing about a summit meeting with top-ranked Georgia in the SEC championship game, the Crimson Tide is favored by 20.5 points.

Though cracking the polls again (No. 21 by the writers, No. 22 by the coaches), Arkansas has not beaten Alabama since 2006 at Fayetteville, 24-23 in double overtime, when Tide kicker Leigh Tiffin missed three field goals and a game-tying extra point. For every 14-13 (2014) and 41-38 (2007) outcome in the last 14 years, there have been Alabama victories of 52-0, 52-0 and 52-3. On the backs of such teams as Arkansas and Tennessee has Nick Saban won at a higher rate at Alabama than Paul William Bryant.

Since the series' inception before the 1962 Sugar Bowl, Arkansas has lost to 10 Alabama teams crowned national champion. Arkansas earlier snapped an eight-game losing streak to Texas A&M, only to see the Aggies topple Alabama in the first game that Saban lost to a former assistant (Jimbo Fisher).

It may prove only a pipe dream, but Razorback fans are crossing their fingers for a same-year sweep of A&M, Texas, LSU and Alabama. Though many Arkansas people treat a Texas game as Armageddon, some junior-high kids in this state would realize a new experience beating Alabama in football.