Health officer: Cases up, but not as much as last year 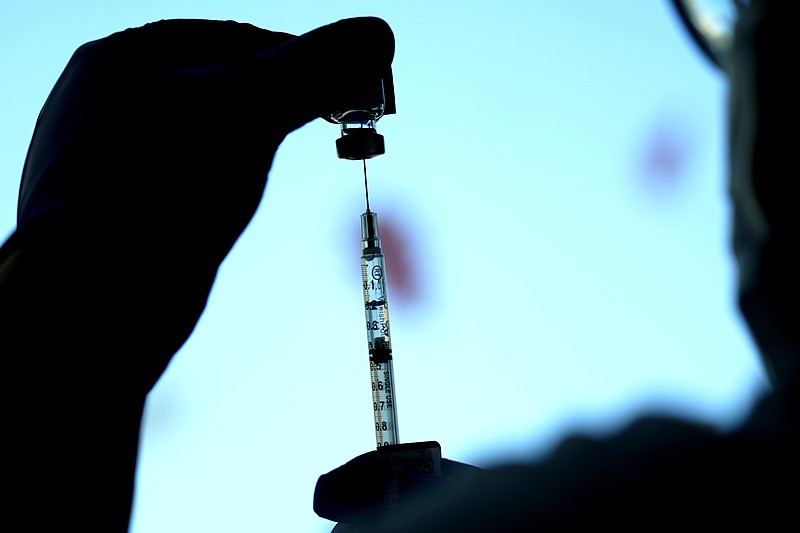 The Associated Press A dose of a Pfizer COVID-19 vaccine is prepared at Lurie Children's hospital on Nov. 5 in Chicago.

While Garland County saw a rise in active cases of COVID-19 for the first time in over a month this past week, Dr. Gene Shelby, county health officer, said the number is still much better than this time last year.

The county jumped from 59 cases during the first week of November to 77, as of Monday, while last week in 2020 saw 372 new positive cases with 445 active cases.

"You know, that is bothersome to see that we do have a little bit of an uptick, though, it's just within a week," Shelby said. "So you really can't say that we have any kind of trend with that, but that is a little bit bothersome, especially seeing that kind of uptick around the state."

Shelby said some other countries have had significant upticks, and even northern parts of the United States have seen an increase "so that's something we're going to need to watch real close."

He said one of the things he's been doing all along, in his COVID-19 research, is comparing local numbers to where they were at last year.

"The really good thing is even if we do have somewhat of an uptick, we're still way behind where we were a year ago," he said. "And we're way, way, way below a year ago. So that's very encouraging in making the comparison of where we're headed.

Shelby said he feels good about the county's vaccination rate reaching the 50% mark, whereas, last year at this time, the vaccine was not available to the general public.

"All in all, I still feel that we're in a good spot in comparison," he said. "But with the cold and the fact that we're, you know, 50% or 48%, is good. But the goal has been to get up to 70% so that we'll be much more closer to kind of a herd immunity. We're still going to have to really promote vaccinations, and I'm glad that now we have the vaccines widely available for the 5 to 11 age group and I think that's going to be real important."

During Monday's Garland County/Hot Springs COVID-19 Task Force meeting, various school representatives noted they were promoting the vaccine, especially for those in the 5 to 11 age group range, according to a news release.

"That is a pretty good turnout, honestly," he said. "It's about the same as what we had for our flu shot turnout. So, I'd imagine that we can anticipate the number of pediatric vaccines to be given, probably, in the same ballpark as flu shots nationwide."

Turner said other than the second-dose clinics and that of some other area schools, for the most part, there will be walk-in clinics held at local pharmacies. He said this is due to what was experienced back near the beginning of the year, in the limitation of their ability to administer first doses continuously.

The supply of the pediatric vaccine, which contains a lower dose concentration, is not as widely available as the adult vaccine but the county still has plenty available for it to not be a concern, he said.

After obtaining 300 doses last week, Turner said Wednesday he was about to pick up 200 more to distribute to multiple area establishments. East Gate Pharmacy in Hot Springs Village, where he works as a pharmacist, is extending its hours, he said.

"If anyone needs it, we're trying to make it as easy as possible to give it," he said.

Shelby said the testing rate in Garland County has remained stable, with about 1,000 tests being performed each week. With last week's 999 tests performed, the overall positivity rate saw a bump.

"We're up to 6%, where we were at 3.9% the previous week," he said. "But I think testing continues to be one of the really important things that we need to promote and we are promoting. A couple of school districts (Lake Hamilton and Lakeside) are in the protocol of test-to-stay, rather than quarantine, where they test the students daily.

"But I really encourage anybody that has any kind of respiratory type symptoms to get tested, because, like I say, testing is widely available," he said.

The COVID-19 vaccine has also become more stable with its improvements in the last several months, as doses are not as delicate, and don't have to be kept at previous ultralow temperatures, which allows more places to offer the vaccine.

"With it not having to be in an ultralow freezer, it's stable under refrigeration for an extended period of time," Turner said. "It's a lot easier. So we don't have the risk of it going bad in two weeks like we did with the adult vaccines."

Shelby stressed the importance of staying home when sick, noting this is crucial in helping stop the spread of COVID and other respiratory-related viruses.

"I think that's going to be a real important thing as we get into the wintertime with the colder weather," he said. "We normally have the respiratory infections -- the flu, and then just regular, common cold -- and one of the ways that we get much more rid of that is with staying at home.