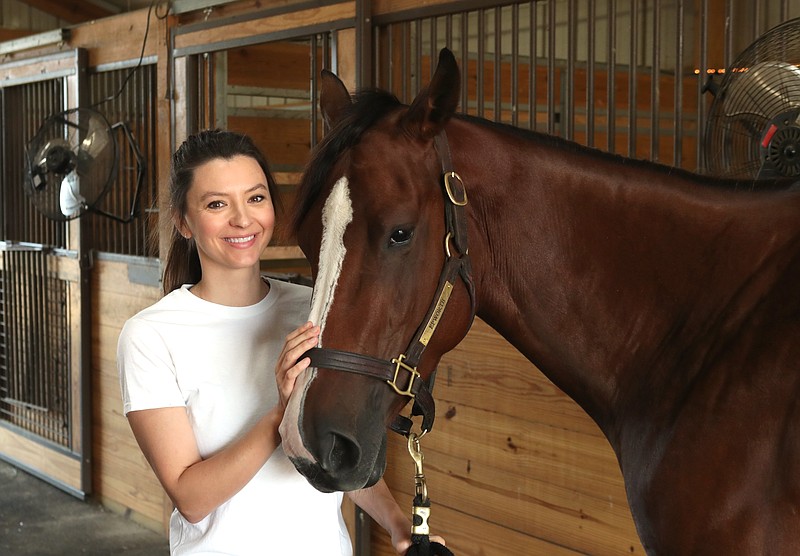 Emily Hollingsworth Clem with one of the horses she is treating for Cedar Run Farm. Photo by Richard Rasmussen of The Sentinel-Record

"I'd never thought about it before I hurt my back really bad," she said.

Clem said she went to several medical doctors to "try and get better. And then nothing ever worked. So my dad had a friend who's like, 'We'll check out a chiropractor and see what happens.' So within two weeks, I was back 100%. In the back of my mind I was always like, 'That's great.'"

Clem attended the University of Arkansas for her undergraduate degree, majoring in biology. "I was about to graduate. And I was like, 'What do I do next?'"

At first, she said she was thinking about attending dental school and then looked into chiropractic school.

"I remembered how much it helped me. I thought, 'Well, you know, I'd be willing to help people who wouldn't be involved in medicine, per se, but you can still allow people to get better and heal.' and so I went and checked it out and loved it," she said, noting she would next go on to attend Cleveland University in Kansas City to specialize in chiropractic medicine.

"I was introduced to animal chiropractic in chiropractic school. They have different clubs that you can go visit and things. And so I went to an animal chiropractic club and was like, 'This is great. This is so cool.' Yeah, like show dogs and horses. It was just really fun to see the animals get better almost instantly," she said.

"You have to do additional training, either while you're in chiropractic school, or after, but it's kind of a lot while you're in school. So I graduated and then after a little while, I decided to go to Dallas to do the animal chiropractic program, which is about another year of traveling down there going back to school. The American Veterinary Chiropractic Association has a certification," Clem said.

Clem started her practice in 2014 in Hot Springs before going back to obtain the animal chiropractic certification in 2018, the same year she got married.

"I decided to start doing the animal course. The whole time I was planning a wedding and everything we were traveling down to Dallas to get this certification," she said.

Clem went to a course in Dallas, got married the next weekend in Hot Springs, went on her honeymoon in Canada, went back the next weekend to Dallas for the final course exam, and then went two weeks later to Oklahoma where she took the certification test and exam.

"It was a busy year," she said, laughing.

Typically, Clem says she works about 50-50 between humans and animals, but for the past year, she has been on maternity leave.

"I did work in my practice three to four days a week. And then I would see animals one day a week. When Oaklawn's open, I would do horses. I didn't this past year, because I was on maternity leave. I would do that one day a week, go out to barns one day a week. I'd have a dedicated day for animals. And now that my daughter's been born, I just kind of want to focus on raising her a little bit right now," she said.

Nowadays, Clem has her mother help her with child care, giving her one day a week at the office for her human practice.

Clem feels what she does is important and many people may not understand how getting chiropractic treatment should not only occur once a person is hurting or injured, but also on a more regular basis.

"What we do is address the joints and vertebrae around where your nerves come out of your body. Your nerves supply your body with everything it does; your digestive system, your respiratory system, your hormones. Your whole body functions from what your nerves tell it to do. So if you have segments in your spine that are interfering with those nerves, they can either tell the nerves to function and send more signals to the digestive system or you can dampen the signal that they send to the organs in the body. So that muscle might not be as strong as it could be if the nerves were better supplied to that area," she said.

When she is with a patient, first, she feels the spine.

"Each joint should have movement to it. It should have a springy feel to it. And when there's a restricted segment, that could be where the nerves are interfered. So what I do is adjust that area, which restores motion, and allows those nerves to kind of talk to the rest of the body," she said.

Clem treats horses and show dogs, which she said are athletes. "They need to function at their best ability," she said.

But she also believes household pets need to function as their best too. "Just because he plays on the couch all day doesn't mean he doesn't have injuries jumping up and jumping down. So I see everything and everybody. You know, people love their animals and want them to be healthy and not in pain," she said.

The most recent success story Clem recalled is two poodles she sees weekly.

"They were not able to walk. They were just kind of skin and bones. One of them was having seizures. And now they're up walking and gaining weight, seizures have stopped. One can walk for hours at a time now, where It was just laying down to begin with. I see them every week now. They're doing great."

Clem said she passionately believes that "chiropractic (treatment) is more of a lifestyle."

"I would preferably not see people in pain. People come to me because they've got back pain, but I would rather see you before you have pain, because pain is kind of often the last symptom that there's a dysfunction going on in the body. I see babies as they grow up their whole life. I'd love to see people from the beginning and then just keep them well throughout their life, versus having to kind of reverse some damage that's been done throughout.

"Is lifestyle. It's about maintenance about maintaining. People think if I'm not hurting I don't need to go see you. ... Well, that's a good thing that you're not hurting, but a lot of that is because you've been coming and getting adjusted regularly, keeping those joints moving. That way your muscles don't get tight and restricted around those areas. That pain comes along at the tail end. Then they have got to start all over. So just because the pain is gone doesn't mean that all the dysfunction is gone yet. The pain can come back faster. Maintenance is key with chiropractic. Just because you're not hurting, doesn't mean you need to give up yet," she said.

Managing a clinic, while at the same time having time for her husband and child is all "about balance and having a good support system," Clem says. "My husband's great. He's able to work from home and he's able to watch our daughter whenever I have to run out real quick and do something, which is great and it's super convenient. I realize not everybody has that option. My parents are able to watch her, too. Like I said, my mom comes up one day a week with me to work, which is great. And I understand not everybody has that, so we kind of have a special situation here."

Since she has had her daughter, Clem said she has changed.

"I was super business-focused. And now, after having her I really want to be with her and kind of watch her grow up while she's little. She changes so fast and I just want to be there. Especially the early stages," she said.

For those wanting to pursue their dreams, Clem said "It takes a while and you just can't give up. You need a support system. It doesn't have to be your blood family. If that's not an option for you. You've got to be able to surround yourself with people you trust, and you can rely on and they're going to help you want to succeed. Vice versa, you want to help them succeed. Very few people can say that they pulled themselves up completely by themselves. It's like I said, you get one thing going and do the next step. But you know, a lot of people are too afraid to take that step or they take that step but then they back off. You just gotta keep stepping. Even if you start back over."