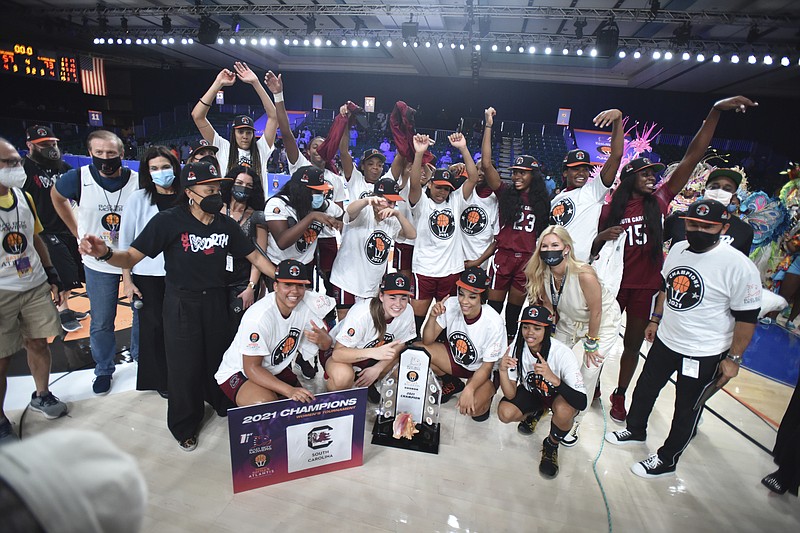 South Carolina women's basketball team celebrates with the trophy after defeating UConn 73-57 to win the championship game at the Battle 4 Atlantis at Paradise Island, Bahamas on Monday. - Photo by Donald Knowles of Bahamas Visual Services via The Associated Press

PARADISE ISLAND, Bahamas -- Kimani Lawrence and his Arizona State teammates were eager to take everything in as they arrived for a men's college basketball tournament that was among the countless things disrupted amid the COVID-19 pandemic in the past 18 months.

Just being here is a big deal, both for the eight teams in this week's prestigious Battle 4 Atlantis and for a sport that has made a tradition of playing early season games off the U.S. mainland.

It's a significant step with the return of numerous events in this Caribbean nation of about 700 islands to the Cancun Challenge in Mexico and the Paradise Jam in the U.S. Virgin Islands.

"A year ago, I didn't think we were ever going to be able to get back here as fast as we have," said Lawrence, whose team dealt with multiple pauses and cancellations due to the pandemic.

Now players at Atlantis are hitting the water slides, relaxing by the resort's many pools and heading to restaurants a year after players were largely locked down in hotel rooms -- separated from each other during meals, even -- on stateside road trips and during bubbled NCAA Tournaments in Indiana and Texas.

"Last year there were a ton of kids that transferred because they were isolated, and they were depressed," Auburn coach Bruce Pearl told The Associated Press on Tuesday. "And they were just being students, wanting to go to class, wanting to socially interact, wanting to be able to travel and play in front of fans.

"So we survived it. And now hopefully this year, we're in a much more normal situation and the student-athletes are the ones that are going to benefit from it the most."

The Battle 4 Atlantis begins Wednesday with sixth-ranked and reigning national champion Baylor, Pearl's 19th-ranked Tigers and No. 22 Connecticut. It is returning from a 2020 hiatus for its 10th edition, and starts two days after the inaugural women's Battle 4 Atlantis got its hyped 1-vs-2 title matchup between South Carolina and UConn.

There are also events at the nearby Baha Mar resort in Nassau, headlined by women's games featuring No. 2 Maryland, No. 4 Indiana, No. 5 North Carolina State and No. 7 Stanford. And No. 9 Arizona begins play Thanksgiving Day in the women's Paradise Jam.

"It's an unbelievable team-bonding experience," Bears coach Scott Drew told the AP. "There's something to be said when you leave the United States and then you're in the Bahamas or anywhere ... you grow closer together, you spend more time together. But obviously you experience things you don't normally experience."

Still, things aren't fully back to normal. The Maui Invitational in Hawaii offers a reminder; that tradition-rich tournament is in Las Vegas this week after behind held in Asheville, North Carolina, last year due to lingering COVID-19 concerns.

Walker Kessler was a freshman at UNC last year when the Tar Heels' Maui trip ended up being an instate trip to the mountains. Now he's here in the Bahamas as a transfer with Auburn.

"Going to this trip was so much fun: being able to fly, going with your teammates and staying in the hotel, and just being at a place like this and a tournament like this," Kessler said, adding: "We're super, super excited for some normalcy for sure."

Visitors entering the Bahamas had to produce negative COVID-19 tests, and teams wear masks when indoors at the Atlantis resort. Lea Miller-Tooley, founder and director of the Atlantis tournaments, said she remained in direct contact with the 16 head coaches for the two tournaments about safety protocols for restarting one event and launching another.

That included having Atlantis president and managing director Audrey Oswell involved as well, saying there was "definitely trust involved" even as she admitted feeling anxious.

Now? Miller-Tooley said people are "excited to get their passports stamped."

"There's risk in everything, but the reward so far outweighs the risk," Miller-Tooley said. "We felt and still do, with the men's teams coming down this week, we feel very confident about the protocols that are in place and everything that we've done to ensure the safety and the planning."

The completion of the women's tournament offered the first glimpses of normalcy, to a degree.

Oklahoma's team swam with dolphins. Players for No. 15 Oregon caught some rays at one of numerous pools on the resort grounds. Teams gathered in their hotel-tower lobby to walk to Imperial Arena, passing masked resort guests on the shop-lined route to the practices and games.

Gamecocks coach Dawn Staley, whose top-ranked team won the title, was out walking her dog Champ around the marina and sheepishly admitted to doing some shopping. Huskies coach Geno Auriemma said he wouldn't hesitate to "take advantage of all their hospitality" due to his vaccinated status. And there was a big-game buzz in the arena for the Gamecocks-Huskies title tilt.

The hope is, it's just the start of making it all the way back from the pandemic.

"There's no reason to come to the Bahamas if you're not going to enjoy the Bahamas," Ducks forward Sedona Prince told the AP. "So we've been able to actually do things and go out and kind of be as a team, and take pictures and videos and memories. ... They put the tournament here for players and family and coaches to enjoy. So yeah, we've been doing that."