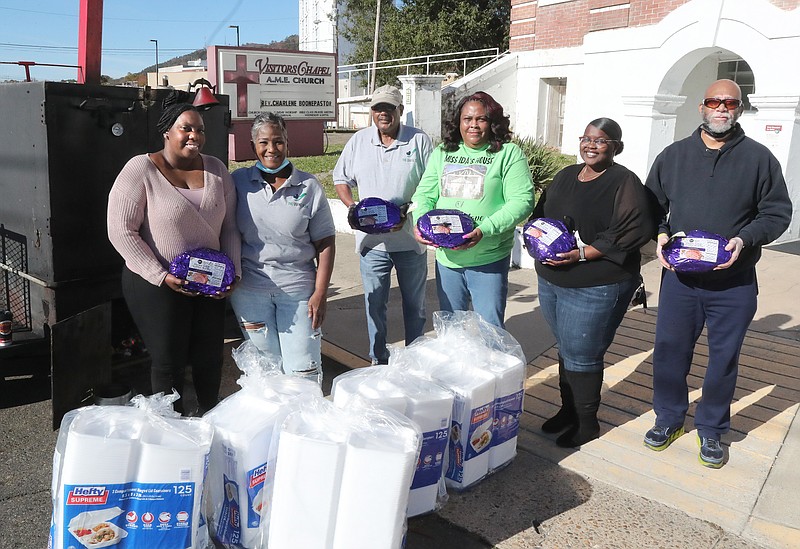 Janice Davis, founder and president of The Giving Team Inc., has led the community meal "A Thanksgiving to Share" for 17 years, an event that her son, Keenan Davis, a professor at Northeastern University and former NFL executive, says was a way for his mother to keep herself busy when he couldn't come home for the holiday.

"I was with the NFL at the time. I got to a point in my career where I couldn't get home for whatever reason," Keenan Davis said. "And at the time, I was like 27, 28 years old, so I wasn't super old, but I was just getting to a place in my career where I needed to stay here, you know. And so she probably knew it was coming eventually. She just hadn't prepared for it."

"Because of him being an older child, I was pretty much perplexed on what to do for Thanksgiving," Janice Davis said. "Thanksgiving being a day of celebration for families, I decided that I would just feed families. So I contacted friends and said, 'OK, this is what I want to do. Give me some names, and some people who want to eat.'"

Keenan Davis recalled that even though he could not make it home, his mother still wanted to cook as a way of celebrating the holiday.

"Because in the South, especially in like Black cultures ... specifically cooking around the holidays ... like it is not even so much about food and edification of nutrition," he said, "It's a process that we cook. People come over, you know, you have certain things that other people may not cook. So then it becomes like a collaborative effort. Somebody has sweet potato pie, the other person has deep-fried turkey, somebody else has, you know, traditional turkey."

"Well, my friends all got together, and we served 53 people that first year," Janice Davis said. "I cooked all the food and stuff for my family from my kitchen. And then the next year, I told Keenan what I did and he said, 'OK, Mom, that's a good idea. That's something we should do.' So the next year, I contacted the Webb Center, and they said we could use the building. And so the next year, we fed 96."

Janice Davis says in the second year she felt a little disappointed, "Because I thought, 'Oh, it will be a lot of people.' But then I contacted more friends again, and people said, 'Oh, I want to help.' So we solicited kids that I taught and my colleagues at the Hot Springs School District to come serve and it went over," she said. "The next year It grew, and the next year it grew. And from that point on I needed to write letters to people and ask for donations."

It was at this point that "we outgrew the Webb Center. So I came and I talked to the pastor of Visitors (Chapel) and he said we could use their lower auditorium, and we came here. That's how 'A Thanksgiving to Share' started," Janice Davis said.

The Giving Team Inc. will hold its annual "A Thanksgiving to Share" at historic Visitors Chapel AME Church from 11 a.m. to 2 p.m. today.

This year's event is expected to feed "up to 1,500 families" in Garland County, Pete Finney, former Dallas restaurant manager, said. Finney travels yearly from Dallas to volunteer. This year he will smoke 65 turkeys and 65 hams for the event.

"There's been so many people through the years," Janice Davis said. "One year, things were kind of in disarray, because I was trying to do everything, but Pete said, 'Let me help. Let me come.' And he takes off for a week, I mean, of his own time to come here and help. He orchestrates everything from the kitchen. I still make all the dressing."

"I've been in the restaurant business for about 33 years. I live in Dallas and I just come up every year," Finney said. "I just got with Janice, and Kennan is like my little nephew, so I just told her I would commit to doing it and I would take off and come up here the week before and get it all together."

Volunteer Danielle Cannon says she began helping at the event at a young age because of Janice Davis, who she and her friends still refer to as "Dear, dear."

"Every year, if I didn't have to work and I was off, I was either up here in the back of the kitchen, talking to the individuals that come in, or delivering the dinners on the van," Cannon said. "It means a lot to me because I love giving back. This is the community I grew up in. So even though we are strangers, we still feel like family."

Janice Davis "basically took us under her wing," said Shirley Beard, a Langston kindergarten teacher, noting Davis is the reason she became a volunteer for The Giving Team Inc.

"Dear, dear did this tutoring after-school program, and that's how we were introduced to her," Beard said. "She basically took us under her wing. I love how she always gives back to the community that we grew up in. Because when we were kids, this was an urban area."

Beard said the tutoring program was offered at the Webb Center and Davis would "help us with any subject that we were having trouble with. And even if we weren't having trouble, we were there helping other kids. And they also fed us. They made sure we got home at a decent hour too," she said.

Keenan Davis says out of all the things he's accomplished, the event his mother started "is the best thing and the reason why it's the best thing is because it's the most pure and organic thing. It's the thing that represents the fabric of America," he said.

"I'm talking about when agronomy was a staple in this country. When faith and community was the staple of this country. Before there were sides of politics and sides of faith or sides of any kind of aisle," he said, explaining anyone who participates in the event can expect to "see all walks of life, literally. And you feel a sense of compassion, and benevolence and charity that you generally don't experience. Everybody's on the same team, working for a common goal. And that's just to share resources with strangers. And those strangers for that day become your family. And to me, that's what Thanksgiving is all about. To me. That's what community is all about."