WATCH: Habitat, Toys for Tots team up for toy drive 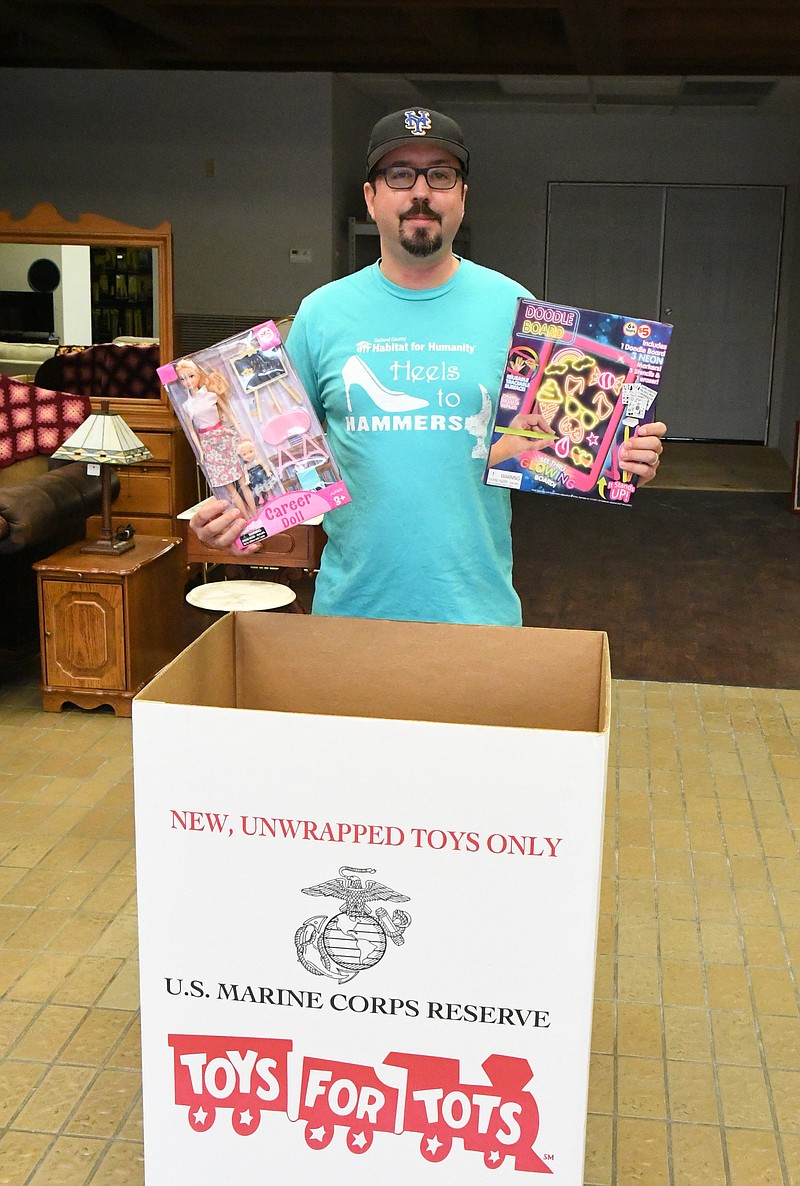 Romeo Lopez, downtown ReStore manager, stands in the new Habitat ReStore at 515 W. Grand Ave. with toys that have been donated for their Toys for Tots drive. - Photo by Tanner Newton of The Sentinel-Record

For the second year in a row, Garland County Habitat for Humanity and Toys for Tots are teaming up for a toy drive for the holiday season, accepting toy donations through Dec. 18.

"Our toy drive has already started, and it will continue through Dec. 18," said Courtney Post, Habitat's public relations coordinator. She said that toys can be dropped off at their ReStore locations at 2817 Airport Road, 3825 Highway 7 at Hot Springs Village, and at their upcoming location at 515 W. Grand Ave.

The new ReStore on West Grand Avenue will take the place of their store at 350 Malvern Ave.

"We are in the process of relocating our Malvern store to 515 W. Grand; it's the old Simmons Bank building. We've purchased that, we've remodeled it, and we hope to open in mid-December," Post said, adding that toys can be donated "until the end of the month at the Malvern location."

"All we ask for is that they bring a new, unwrapped gift. And it can be a book, a toy, it doesn't really matter," Post said. There are no price limits on donations.

"We've actually already had someone who's very generous donate a bike, so it's really up to the donor on what they want to do," she said.

Post said that donated toys will be distributed in the area. "We have plans to keep them local. We know our shoppers are very generous and I think they see a need in the community and they like to try to keep it in the community, so we do our best to take these toys to places like Jackson House and Salvation Army, and they'll distribute them to the families in need from there," Post said.

This is the second time that Habitat and Toys for Tots have worked together. Post said that last year the drive was "amazing; we had several truckloads that we took to the Jackson House and Salvation Army almost once a week during the toy drive."

Romeo Lopez, downtown ReStore manager, also said that the 2020 toy drive was a hit. "It was very successful last year and we're hoping it will be the same this year," he said.

Lopez said that giving toys to children in need is important. "It's mostly for self-esteem and to just let them know they're not forgotten," he said. Lopez added that in the future, these kids will look back and remember that the community helped them out.

In 2020, Habitat raised around 1,300 toys in the Toys For Tots drive, Lopez said. He noted that Toys For Tots Conway and the Albert Pike Dollar General both made large donations last year.

"I think every kid deserves a happy Christmas, and in the last two years, we, just at Habitat alone, have seen an increase in need in all area, food, shelter, clothing, so I know there's a definite need for providing toys this year. I know a lot of families are struggling, prices are increasing, toys are going to be something that's very hard for them to do, and if our community can help out in any way, I think that would be great," Post said.