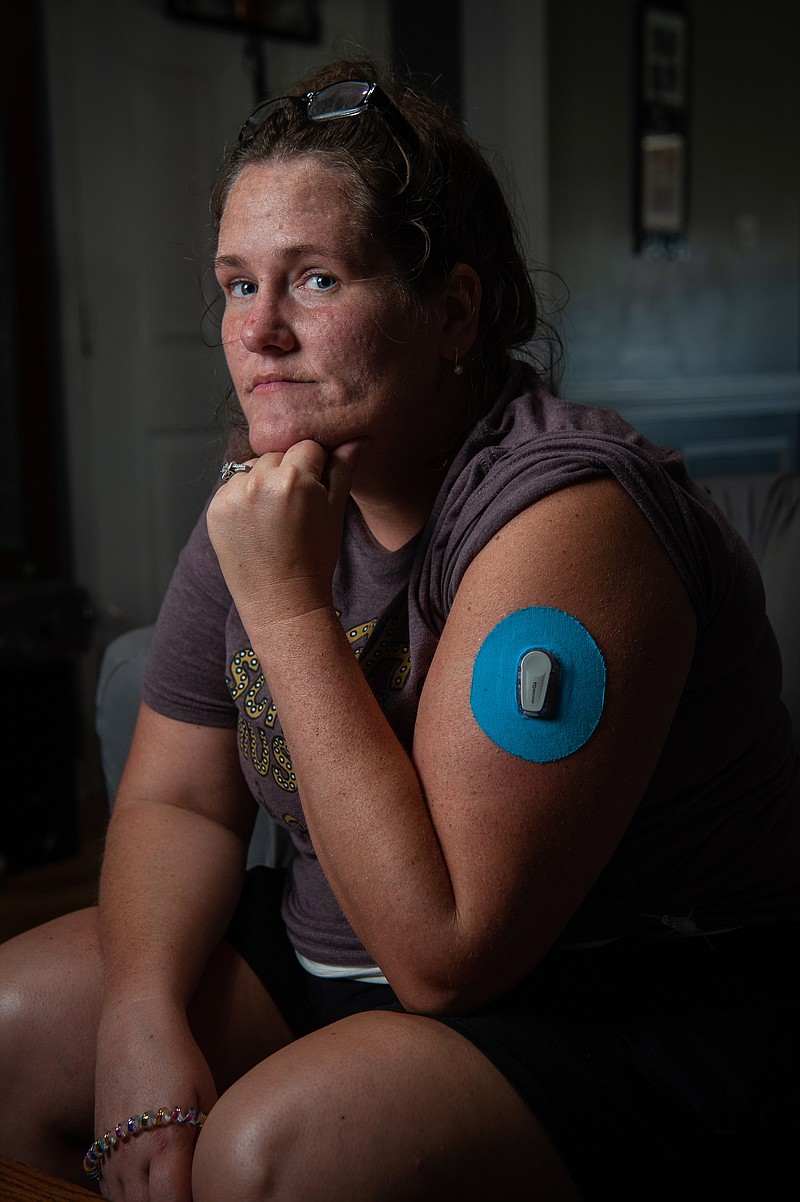 Courtney Massery is shown in her home in Ward on Aug. 12. - Photo by Rory Doyle

EDITOR'S NOTE: Jerry Mitchell, a staff writer for The Sentinel-Record from 1983 through 1986, founded the Mississippi Center for Investigative Reporting in 2019 after working as an investigative reporter at the statewide Clarion-Ledger for more than three decades.

GoFundMe began as a place to support social and similar causes, but now families battling diabetes are using the fundraising platform as a last-ditch attempt to cover the skyrocketing price of their lifesaving drugs and supplies.

"My mom needs insulin to live," Zoë Massery of Ward in Arkansas' Lonoke County pleaded in her fundraiser. "I don't know what I would do without my mom. I am 16 years old and still need my mother. I see the stress that my mom and other people have of wondering if they are going to be able to get the stuff they need to live along with tons and tons of other bills."

Her mother, Courtney, is one of more than 9 million Americans dependent on insulin in the United States. Their family is among many in the U.S. desperate to find funds somewhere to cover the costs of drugs and supplies that keep them alive.

There are approximately 3,680 campaigns still present on GoFundMe that mention both "insulin" and "diabetes." Almost 1,000 GoFundMe accounts mention insulin pumps. Even after insurance, some campaigners reported that they needed $7,500 out of pocket for their insulin pumps. Monthly sensors for glucose monitors can cost around $250. Others express urgency to raise funds for their monthly supply of insulin, which for some costs $1,600.

Crowdfunding, which raises small amounts of money from a large number of people, occurs predominantly through posting social media and online platforms like GoFundMe.

Zoë Massery created a GoFundMe campaign on Feb. 11 titled, "Help our mom with her diabetic supplies." The teen had witnessed insulin prices fluctuating throughout different presidencies, as well as sacrifices her family made to afford it. Her frustration motivated her to surprise her mother, Courtney Massery, with a fundraiser to alleviate costs.

Courtney Massery was diagnosed with Type 1 diabetes in 1985, when she was a year old. Her pancreas ceased producing insulin, a hormone instrumental for regulating blood glucose levels. Massery, now 38, said pharmaceutical companies continue "gouging" insulin prices to where diabetics can't afford it.

However, Massery's feelings were mixed after learning of her daughter's project.

"I appreciated her trying to help me," Courtney Massery said. "I hate that my 16-year-old even has to think about doing something like that because it has become so hard for us to live paycheck to paycheck. And I have a choice: Do I get my insulin pump, or do I get food and groceries? Everything just costs way too much."

When Zoë Massery started the GoFundMe page, her mother was paying between $140 and $170 for her monthly insulin. This price does not include other monthly diabetic costs, such as blood glucose monitors, censors and insulin pumps. Courtney Massery said there was a time where she paid $20 for her monthly supply of insulin, but she hasn't seen a price that low since 2013.

Courtney Massery said the most that she spent on her monthly insulin was in 2019. She had three insurance plans, but still paid $1,300 out-of-pocket. That is about $300 more than the average American family pays for a mortgage. In fact, even with her husband's income and her disability checks, the family had to choose between Courtney's medicine and their house. The Masserys' church stepped in to help with mortgage payments during this period.

Massery said the price pharmaceutical companies charge, as well her insurance coverage, changes yearly. She described the "teeth-pulling" process of getting these companies to cooperate and communicate with her pharmacy. There were times in 2020 where the mother of two resorted to eating less and rationing her insulin so she could buy groceries.

"Big Pharma I can't stand," Courtney Massery said. "And I hope they're standing in front of God and I'm right behind them and I'm watching them all go to Hell. And I'm a Christian. I don't understand anyone who is a Christian and can justify it and sleep at night."

Zoë Massery listed $2,000 as her campaign goal and challenged 600 people to donate $5. After six months, her GoFundMe campaign did not receive any money. Failing to achieve a GoFundMe goal can be a death sentence for diabetics.

In March 2017, Shane Patrick Boyle's death sparked headlines after he fell $50 short of his $750 goal for insulin. Boyle moved from Texas to Mena, Arkansas, to take care of his ailing mother. This move across state lines disrupted his prescription benefits. He succumbed to diabetic ketoacidosis while rationing his last vial of insulin, which made his blood acidic.

Even if diabetic patients reach their goal, some realize they cannot access the funds. Grady Moffett, 41, of Mobile, Alabama, began a GoFundMe called "Health and Diabetes." Diagnosed with type 1 diabetes, he started a campaign for his one-month supply of insulin after unexpectedly losing his Medicaid benefits. Once Moffett's campaign received $117 of his $200 goal, he discovered other obstacles.

"I'm in dire need of hope," he said. "I haven't even been able to withdraw the money off of my GoFundMe account because I don't have a bank account or debit card or credit card to put on the account."

His disability benefits restrict his assets. However, he is allowed to have a Cash App. He registered his Cash App as $SlimGrady41 because he is a fan of Eminem and is a reference to the rapper's song "The Real Slim Shady." When GoFundMe denied his Cash App card, Moffett turned to Mutual Aid Diabetes for help.

"MAD doesn't want to exist, but we exist because we have to," Emily Miller, a MAD leadership team member, said. "Unfortunately, we're doing the labor that [pharmaceutical] companies and [nonprofit] organizations are refusing to do by providing material support by way of peer support, nonprescription sharing and outreach to the community."

MAD has over 1,500 followers on Twitter and almost 2,000 followers on Instagram. The group also boosts Cash Apps and Venmo accounts, as well as GoFundMe campaigns, for people with diabetes who need immediate funding.

As of Aug. 11, MAD has accepted 114 mutual aid requests. Forty-nine of these requests asked for help obtaining insulin, and 57 asked for help obtaining insulin supplies. Furthermore, 43% of these requests had to be filled through peer crowdfunding, non-prescription supply sharing or referrals to diabetic community members who participate in prescription sharing.

The organization added that its peer intake specialists exhaust all feasible options, such as patient assistance programs and coupons, before boosting a cash amount needed from the community. Even if a person reaches a crowdfunding goal, the financial relief is temporary.

"These systems are set up to continue gouging people for their money and also to create this continual need," Miller said. "So, we are already seeing a bunch of people re-submitting requests for us. But we do our best to try and give them creative options so that maybe we don't need to."

Miller stressed that donor burnout also poses an issue to crowdfunding. They said MAD rarely has the funds to meet the requests itself. Therefore, the organization must balance meeting the needs of each community member while also not exhausting the community with donations.

Big Pharma and its 'Solutions'

In 1923, Frederick Banting, James Collip and Charles Best discovered insulin. The trio sold their patent for insulin to the University of Toronto for a symbolic $1, knowing this drug would save millions of lives each year.

"Now they charge you a lot more for it--for the same stuff you bought years ago," Massery said. "And it doesn't cost them any more to make it."

A vial of insulin is estimated to cost no more than $3 to $6 to produce. Insulins such as Humalog, which Courtney Massery had before switching to Fiasp insulin, costs between $250 to $400 a bottle without insurance.

The big three pharmaceutical companies also practice "evergreening," where they tweak the formularies that extend patent protections and block competitors. This tactic has prevented generic versions of insulin from entering the market, which would ultimately drive insulin prices down.

Eli Lilly did develop a generic version of Humalog, which it prices at $137.35 per vial. The company also launched the Insulin Value Program in April. This program offers a $35 copay card for both the uninsured and diabetics with commercial insurance.

In response to public outrage and pressure from Congress, pharmaceutical companies created patient assistance programs. These PAPs, such as Lilly Cares and NovoCare, offer free or discounted diabetes medication to those who qualify.

"Nine times out of 10 they recommend a patient assistance program," Miller of MAD explained. "[Applying for a PAP] takes a good chunk of time to fill out the paperwork submitted and then to hear back from them. Generally, you're gonna get denied. Then they're also going to suggest applying to Medicaid... Those different suggestions from GetInsulin are not necessarily helping you meet that emergency need."

Courtney Massery has tried Walmart's human insulin. However, she said this is not an effective solution for people who have had diabetes for a long time.

"Your body gets immune to things and it doesn't work as well," she said. "And cheaper made stuff -- you kind of pay for what you get, if that makes any sense. I'd use three or four times more insulin from the Walmart brand than I do for the bottle that I use."

Waiting for a price cap

Courtney Massery emphasizes that people with diabetes need to find a way to lower costs.

"When it comes to medication, there should be a cutoff -- a cap," Massery said. "In my opinion, it should be illegal for it to be that expensive. Because nobody in their right mind can afford that amount of money."

Today, there are 13 states where copay laws are in effect: Colorado, Connecticut, Delaware, Illinois, Maine, Minnesota, New Hampshire, New Mexico, New York, Utah, Virginia, Washington, and West Virginia. However, the majority of these states only cover diabetic patients with commercial health insurance. Laws with the highest copay cap are $100 for a 30-day supply and the lowest are $25.

After years of taking care of her mom and watching her father take extra shifts, Zoë Massery wants to be a part of changing insulin prices. As a junior in high school, she aspires to make it big as a singer. She is also interested in pursuing a profession within the medical field. Regardless of how she earns her money, Zoë wants to give it back to the diabetic community.

"It's not just us who are going through that," Zoë Massery said. "There are kids who have to pay $500 for one vial of insulin. If I can help change that, then that's pretty much what I want to do."

The total amount her mother has paid for insulin and diabetic supplies is fast approaching $500,000, she said. "How ridiculous is it to spend that much money on something you need to live?" 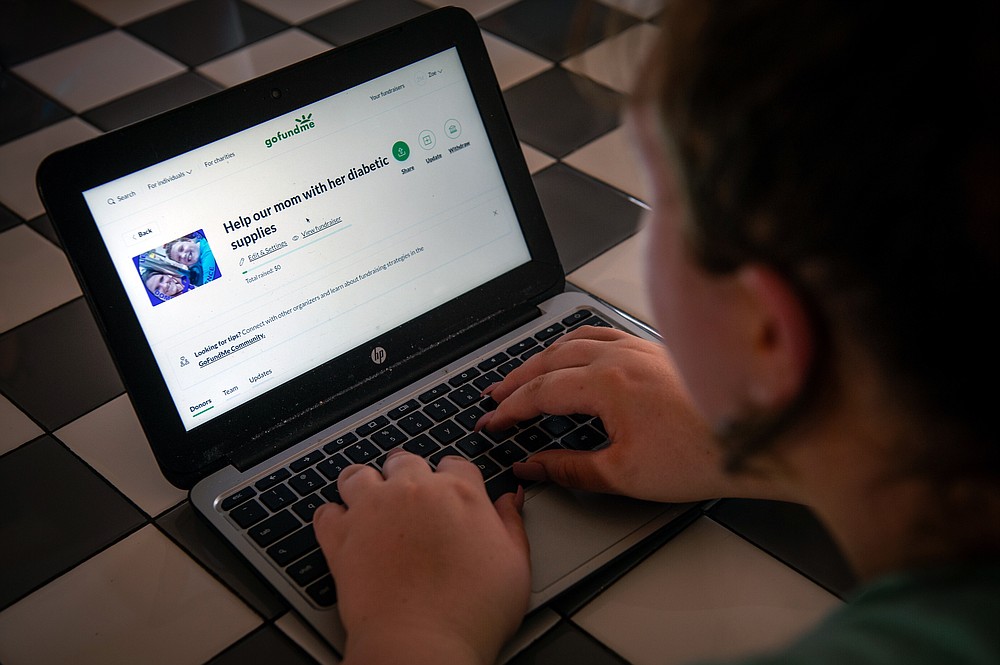 Zoe Massery shows the GoFundMe page she set up for her mother in Ward on Aug. 12. - Photo by Rory Doyle