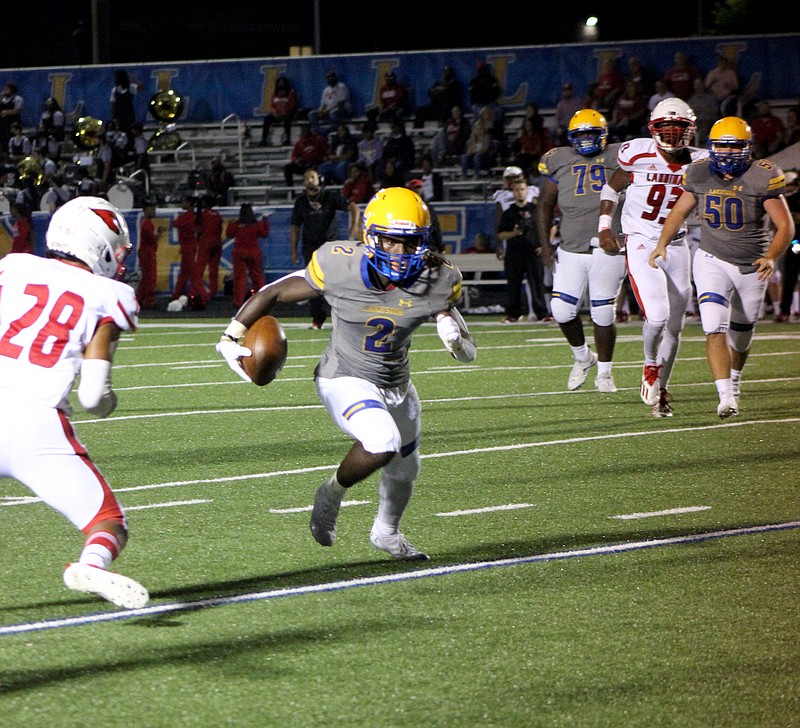 Lakeside’s Chase Cross (2) makes his way up the field during last week’s game against Camden Fairview. The Rams travel to Magnolia to face the Panthers tonight. - Photo by James Leigh of The Sentinel-Record

Following last week's 38-33 loss to Camden Fairview, Lakeside is looking to bounce back in its first "real" road trip of the season as the Rams travel to Magnolia to take on the Panthers, head coach Jared McBride said.

The Rams (1-3, 0-1 5A-South) seemed to have things going their way against the Cardinals a week ago before Camden Fairview scored three straight touchdowns -- two in the second quarter and one to start the third -- to turn the game around.

The Rams had a four-game home stint scheduled to start the season after their short road trip to Lake Hamilton, so this marks the first time the team will be truly on the road this season.

"It's the first true road trip for us, so there's all kinds of things you got to do to get ready for that," McBride said. "But yeah, I think kids will be ready to and excited about getting on the road and playing a good Magnolia team."

"You watch film on them from their last ballgames, and you'll see they're taking care of the football," McBride said. "They've got two outstanding running backs. They had three guys over 100 yards last week, and Texarkana's a good football team also. We'll see those guys next week, but if you pay attention to what what they're doing, they're just, they're playing better, taking care of the football and playing hard."

Despite their early struggles, McBride feels that the Panthers are "a good football team."

"They're physical on both lines," he said. "They offensively cause you problems because they run a style of offense that's not common to see, so it makes you have to adjust and do some different things to make sure you're doing what you need to do to keep them out of the end zone. When they don't turn the ball over, they're a really good football team. They have turned it over earlier in the year and have gotten beat, but when they take care of the football, just like last week against Texarkana, they prove that they're, they're a really good football team."

Magnolia runs a Veer offense, which is a scheme that is not used as much anymore. The Veer uses multiple different looks to create mismatches against defenses.

"They'll run double wing," McBride said. "It's a triple option. ... We don't see it but one time a year, and that's Magnolia. And we didn't get to play them last year because of COVID, so some of these kids hadn't seen triple option in two years or ever."

Defensively, the Panthers have a multiple front with an aggressive style.

"They're a multiple front defense," McBride said. "They're playing kids both ways. Their running backs are linebackers, and they're very aggressive kids. They have a kind of bend but don't break style, but we expect them to play hard and to be a good challenge."

McBride is pleased with how his players have started to step up and find their roles on the team this season after struggling early.

"We're just trying to get better each week, and we have," he said. "And that's the thing that we challenge our guys to do. We were still, you know, we've got a lot of guys this is their first year to, to play and play it on this level, and they're still learning. And you just see improvement every week out of them. It just makes you feel good."

Kickoff at Panther Stadium is set for 7 p.m.