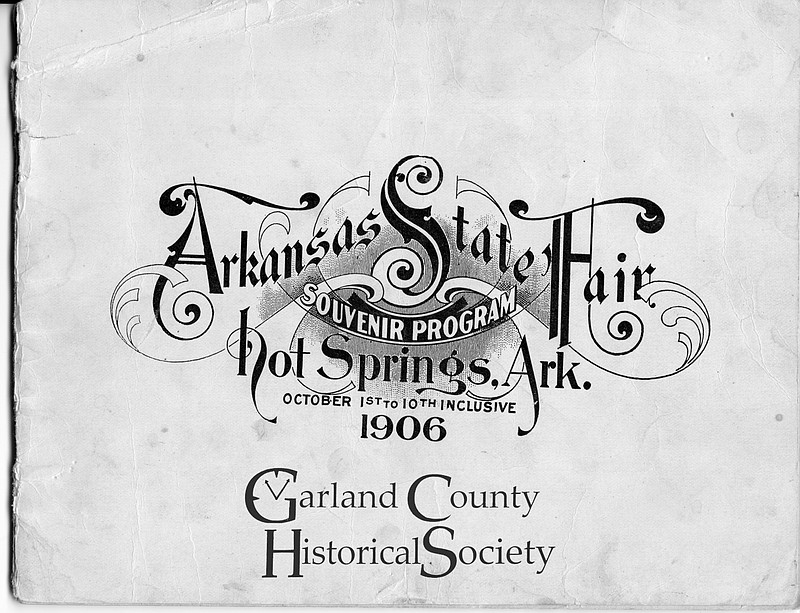 Front cover of souvenir program for 1906 Arkansas State Fair, the first one held in Hot Springs.

What’s more fun than going to the State Fair in Little Rock? Well, did you know that, from 1906 to 1914, Arkansans enjoyed the Arkansas State Fair at Oaklawn?

Oaklawn Park, now known as Oaklawn Racing Casino Resort, had been completed only the year before, and for the fair it was transformed into a “fairyland of reality and fantasy.” The main grandstand was called the “Exposition Palace,” and Arkansas’ finest livestock paraded in the paddock. A carnival midway entranced the crowds, who also thrilled at the sight of the California Arrow, an airship recently displayed at the St. Louis World’s Fair, and monkeys parachuting out of hot air balloons.

In 1906, Hot Springs was a growing city of 15,000, which hosted 125,000 visitors annually. Many of those residents and visitors came to the fair on electric streetcars that had to put on extra cars to handle the crowds. The dusty roads leading into the city were crowded with wagons and buggies carrying folks to the fair. By day, multi-colored flags snapped in the breeze above the grandstand, and at night electric lights flashed out a gala welcome. The curious crowds browsed through 100,000 feet of exhibition space which housed, among many other things, a fully furnished cottage and a very popular display by the Ouachita Pottery Company. On the midway, people loved the “fattest baby on earth,” the educated alligator who “shot the chute” (climbed up and slid down a long slide), Black Diamond (the famed Hot Springs ostrich that pulled a sulky), and a high diver who leaped from a ladder into a vat of water. Band concerts, speed contests, and fireworks added to the excitement.

The 1907 state fair started with a “Floral Parade” down Central Avenue for which over $5,000 was spent on street decorations alone. The crowds at Oaklawn enjoyed National Guard regimental bands, fair queens, a cattle show, a baby parade, and a Carnival Day that featured 100,000 pounds of confetti and 1,000 costumes imported from Chicago. Piano and vocal performances and literary readings entertained the more serious minded.

A major attraction at the 1910 fair were the harness races, complete with an exhibition featuring world champion harness horse Dan Patch, whose record of 1.55 for the mile has never been broken. But even more exciting than Dan Patch was the 1910 appearance of former President Teddy Roosevelt. Hot Springs native John Greenway, a former Rough Rider, had invited his former commanding officer to address the crowd at the 1910 State Fair. Roosevelt was greeted at Oaklawn Park by a massive human flag consisting of nearly 2,000 Hot Springs students who formed the Stars and Stripes in their red, white, and blue clothes. Standing under a replica of the Liberty Bell made up of 4,000 white roses, he addressed an enthusiastic crowd of 40,000.

From 1906 until 1914, when the event moved to Little Rock, the fun was all here as Hot Springs hosted unforgettable Arkansas State Fairs.