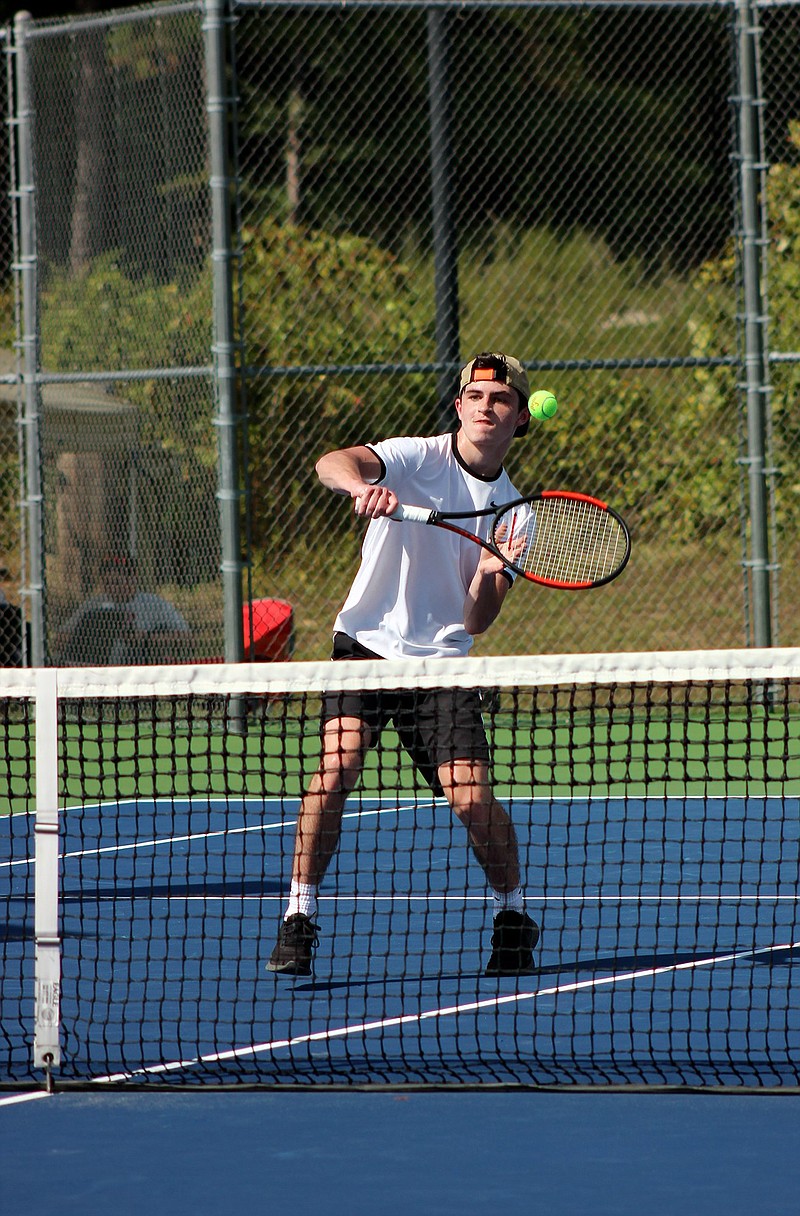 Hot Springs' Connor Bailey taps a shot back over the net in a singles match Monday in the 5A-South Conference Tennis Tournament at Lakeside. Bailey defeated Texarkana's Ryan Wardlaw, 0-6, 7-5, 6-0, to advance to Wednesday's semifinal round. - Photo by James Leigh of The Sentinel-Record

Connor Bailey, a senior at the Arkansas School for Math, Sciences, and the Arts who plays tennis for Hot Springs, will be making his first trip to the state tennis tournament as a Trojan next week after a come-from-behind victory in the second round of the 5A-South Conference Tennis Tournament at Lakeside Monday.

Bailey took a 7-6 (9), 6-3 win over El Dorado's Sam Rothwell in the first round Monday morning to face Texarkana's Ryan Wardlaw in the second round. Wardlaw dominated the first set, winning six straight games, but Bailey bounced back from a 4-2 deficit in the second set to take a 7-5 win and force a deciding third set.

Bailey got behind in a couple of the games in the third set, but he managed to take a 6-0 win and advance to the Class 5A State Tournament, which will be hosted next week by Lakeside at the school and Hot Springs Country Club.

"Coach (Mona Lisa) Gray has always, like, instilled it in us that, just next point, next point," he said. "The last point doesn't matter, even if you hit it into the net, hit it out of bounds; it doesn't matter. The next point is the one that matters."

Bailey will face last year's Class 5A state runner-up, Lakeside junior Ben Hollis, Wednesday at 10 a.m. in the semifinal round, but Bailey is just excited to be advancing to the state tournament.

Lakeside junior Graham Dolan, who earned a bye into the second round, will face Texarkana's Garrett Pendergraft after Dolan took a 6-2, 6-4 win over Asa Linn, a junior at ASMSA playing for the Trojans.

Lake Hamilton's Ty Robinson and Kai Condley earned a bye into the second round where they easily defeated Texarkana's Bryce Jones and Cobrin Atchley, 6-1, 6-0. The pair will face off against William Ivy and Griffin Gulley Wednesday in the semifinals.

On the other side of the boys doubles bracket, Lake Hamilton's Peter Bobnar and Austin Praetzel, who earned a bye, will face Lakeside's Walker Wood and Griffin Cornelison, who also earned a bye. Bobnar and Praetzel defeated El Dorado's Baylor Blackburn and Addison Dumas, 6-3, 6-0, to advance while Wood and Cornelison defeated Sheridan's Gabriel Kuttenkuler and Owen Reynolds, 6-1, 6-2.

Lakeside junior Julia Malone is returning to the Class 5A state tournament for the third consecutive time after she defeated Texarkana's Hannah Smith in straight sets, 6-0, 6-0.

While Malone did not drop a single game, she reached deuce once in each set before eventually taking the win. Malone used solid ball control as multiple times she sent Smith to one side of the court before hitting a cross behind her for the point.

"I think I played pretty well," Malone said after the win. "I'm pretty proud of myself. I'm kind of nervous for (Wednesday), though."

Malone said that she did not like having the bye as she would prefer to play each round.

"I kind of wish I didn't have a bye," she said. "I like to play a little bit earlier, you know, instead of just sitting here all day. My nerves kind of build up whenever I sit here all day."

In another Garland County sweep, Malone will be joined by sophomore teammate Sabrina Long, who took a straight-set win over Texarkana's Abby Hopkins and a 6-1, 6-0 win over Hot Springs' Nina Gunnell to reach the semifinals.

Ballesteros took a 6-0, 6-1 win over Sheridan's Emma Hardin and a 6-1, 6-1 win over White Hall's Diya Dadlani to reach the semifinals to face Malone Wednesday. Praetzel entered the tournament with the only other bye in girls singles play, defeating El Dorado's Millee Mobley, 6-1, 6-1, and she will face Long Wednesday.

In girls doubles action, Lakeside and Sheridan will represent the conference as Lakeside's Elizabeth Cowen and Lauren Latham will face Sheridan's Jablonski and Caswell Wednesday. Cowen and Latham defeated Lake Hamilton's Hayleigh Wyrick and Natalie Tedder, 6-0, 6-2, after all four semifinal teams earned byes into the tournament.

Lakeside's Addison Dowdy and Mia Francioni will face Sheridan's Mayberry and Szliflinski in the semifinals Wednesday. Dowdy and Francioni took a 6-2, 6-2 win over El Dorado's Bledsoe and Smith.