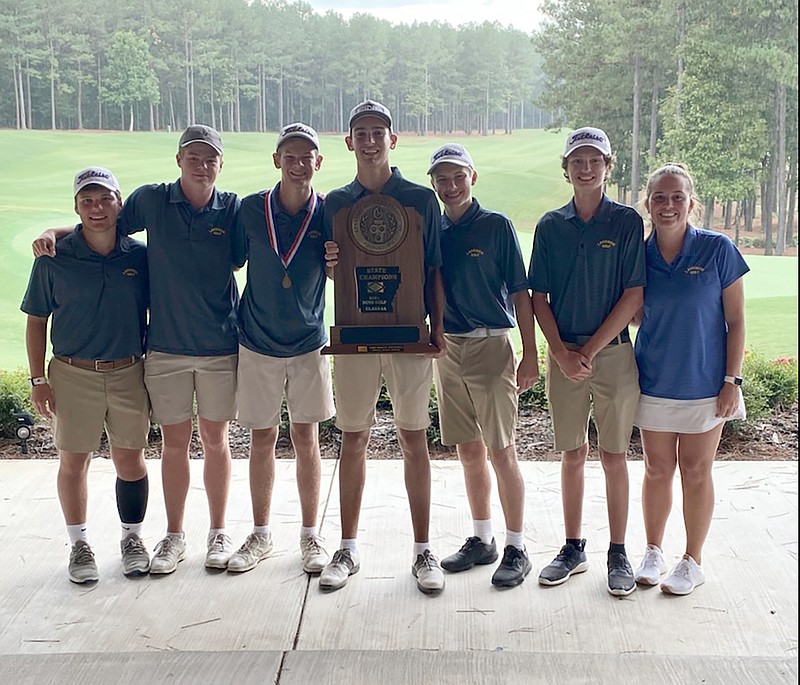 Lakeside freshman Will Gordon birdied two of his last three holes en route to a 1-over 73 and the Class 5A State Boys Golf Championship Tuesday at Mystic Creek Golf Club in El Dorado.

Will Gordon and his brother Cooper, a senior, led Lakeside to the championship with a five-stroke win over Van Buren and nine-stroke lead over tournament host El Dorado.

Going into the tournament, Lakeside golf coach Kirsten Heideman said that the course is one of the hardest in the state, and the team did not play well at the course last year during the 5A-South conference tournament.

"It's the number two hardest course in Arkansas, so we weren't really knowing what to expect out of that one," she said. "But last year we played this course in the pouring rain. It was flooding for conference, and so that was quite the experience."

Heideman and the Rams were waiting for the scores from El Dorado to come in at the end of the tournament, expecting the Wildcats to be the team to beat on their home course.

Heideman said that Will Gordon closed out his round exceptionally strong, and Cooper Gordon, while having some struggles on No. 18, kept his composure late.

"Will Gordon, I watched him coming in, and he finished two of his last three holes birdie, birdie, which was an amazing finish," she said. "His older brother Cooper, we watched him on the last hole, and he got into a little bit of a, little bit of a pickle on the 18th hole. He ended up going down a totally different path and ended up saving par from literally another hole, so that was really, really good on his part to not give up, especially on that one. He could have easily just, you know, blew up on that hole, but he didn't. He kept his composure, and that's what winning teams do is they just keep their mental game going. And they just do what they have to do, and that's what I saw out of those two boys especially."

Hot Springs' Cade Miller shot a 90 after qualifying as an individual.

"He played great front nine and shot a 40, and so he really set himself up and was in a heck of a position after the front nine," said Hot Springs golf coach Josh Smith. "You know for him, he worked his butt off this year, and he put in a lot of work, even since conference, shooting 82 to making All Conference and then, you know, just trying, trying to prep yourself for that golf course, which is so hard anyway. But, you know, it didn't go the way he wanted on the back nine, but he battled and hung in there and posted a 90, finishing 24th out of 68 kids. That's just a testament to how hard he worked this year, and I'm just proud of him for taking it as serious as he did and putting in the time."

Lake Hamilton was led by Zac Pennington and Cade Robinson with rounds of 95, Peyton Garder shot a 101, Brode Horton a 104 and Jack Higginbotham a 136.

Lake Hamilton golf coach Brandi Higginbotham was pleased with how well her team performed on a difficult course.

"Our kids felt like they hit the ball really well," she said. "It takes a lot of precision to play well on that course, and I thought really our guys did pretty well. I mean it may not reflect necessarily in a great score, but the challenges of that course drive you crazy mentally. You know, they knew kind of what their, their goal was compared to other courses, and I felt like, most of them were able to get pretty close to what they wanted to be able to shoot there."

While the Rams will lose Cooper Gordon to graduation, Heideman feels confident about the future.

"I think this team has potential to be really good next year," she said."Cooper's graduating this year, so we'll lose Cooper, but we have some other boys on the team who are putting in a whole bunch of practice and making improvements every day, so I have a pretty good feeling about this team. They get along well, and they really support each other, and so I think that's what's important for the future."