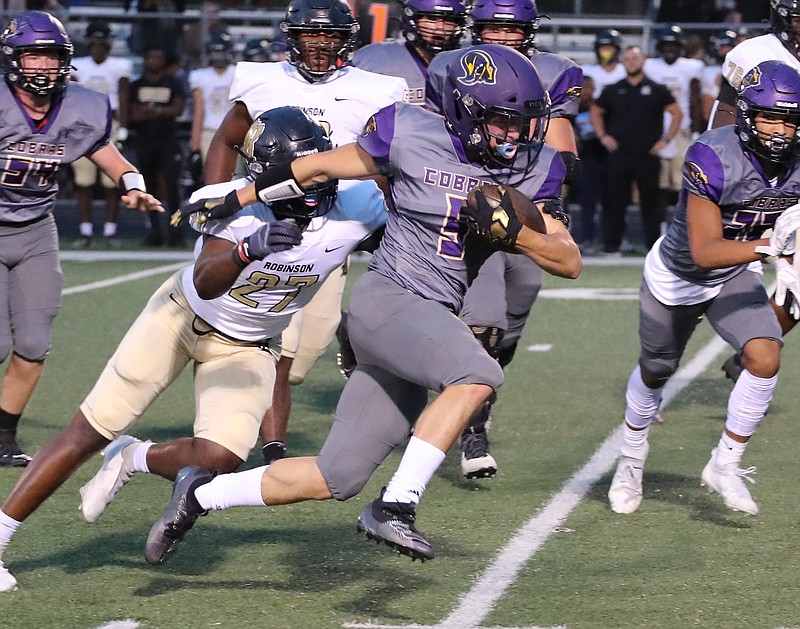 Fountain Lake's Caleb Lacy (5) runs for gain against Joe T. Robinson during a Sept. 24 game at Fountain Lake. Head coach Kenny Shelton said that he found out Thursday that Lacy is out for the remainder of the season. - Photo by Richard Rasmussen of The Sentinel-Record

Fountain Lake's roster has gotten about as thin as it can get.

The Cobras (3-2, 1-1 4A-7) are expecting to dress out 19 players for tonight's road contest against the Arkadelphia Badgers (2-3, 1-1). The team dressed 21 last week as it traveled to Nashville for a 54-21 win, its first program win at Nashville and only the team's second-ever win over the Scrappers.

Head coach Kenny Shelton is concerned about junior quarterback Donovan Whitten and senior running back Jaishon Davis, the latter of which has four Division I offers.

"They've got probably, I would probably say the best running back in the conference from what I've seen," he said. "Now, you know, I haven't had a chance to see film on everybody. I've seen film on almost everybody, but a very, very talented running back. Very good quarterback."

His biggest concern, however, is numbers.

"I said, 'Hey, can I borrow about 10 or 15 of your guys? You know, just for practices? You know, they don't have to be the starters. I'll take any, I'll take any of them.' So he thought that was a little humorous," he said.

"Right now it feels like we're, we're holding together with bubble gum and duct tape, you know, and I'm running out of bubble gum. But I think we think we can compete with them up front. You know, I think that if we can play as well as we did, with the same intensity as we did last week, I feel like we can give them a pretty good game."

Shelton said that the team's plan for tonight is to try to contain Davis and the rest of the team's run game.

"We're gonna do everything we can to shut their running back down. ... It's always been my philosophy, if we're gonna get beat, we're gonna get beat with with a team throwing on us," he said. "So we're, we're going to do everything we can to get their running back down, and force their quarterback to, to have to make, you know, consistent good decisions and good throws and beat us through the air, and he can run, too. ... He's a dual threat, but, you know, we feel like they try to run about 70, 75% of their offense runs through their running back."

With roughly a third of the Cobras on the bench or out for the season, Shelton will be relying on senior Steven DeArmon to handle much of the team's running game.

"Stephen's good," he said. "He's, you know, he kind of tweaked his ankle at the end of the Nashville game, but he'll be fine."

While Shelton did get good news about DeArmon, the same cannot be said about his classmate, fullback Caleb Lacy.

"We've lost him for the year, which is kind of what we were thinking," Shelton said. "He's going to have to have surgery next week. That's a huge blow, and then unfortunately Gavin Nguyen had an injury in practice (Wednesday). We're still kind of waiting to see how serious it's gonna be. He's definitely out this week, and it could be a season-ending injury. That's a big blow for us. You know, he's our best inside linebacker, and our best guard."

In addition, quarterback Wesley Campbell, who also is an inside linebacker and the team's kicker, injured his throwing hand.

"At least he can grip and a throw football (Thursday)," Shelton said. "That's better than yesterday. Nothing's broken; I think it's just he jammed that thumb pretty hard. That's not good for quarterback to jam his thumb on his throwing hand."

While Arkadelphia marks the last of what Shelton calls "murderer's row," he knows that there is no slouch in the 4A-7 conference.

"There's no cupcakes in this conference," he said. "But yeah, these these definitely would be the three big dogs. I'll tell you Ashdown's very talented. I just now got film (Thursday) on them. I haven't had a whole lot of time to watch it, but it's first time I've got film on them and Bauxite. I still don't have any film on Malvern, but I did go and watch them play Lakeside during our our bye week. So at least I've seen them in person."

If the team stays healthy, Shelton still thinks that there are good things ahead.

"I really like our chances, you know, this week and the rest of the season, but I can't -- I've said it all, you know, from day one," he said. "You know, we've already had a few -- we started off at 27, and I'm down to 19. I can't afford to lose not one more kid, especially in a key spot because we've played musical chairs as much as we can play. And I think we're OK where we are now, but it does not leave me much wiggle room at all if we have another injury."

Kickoff tonight at Badger Stadium is set for 7 p.m.