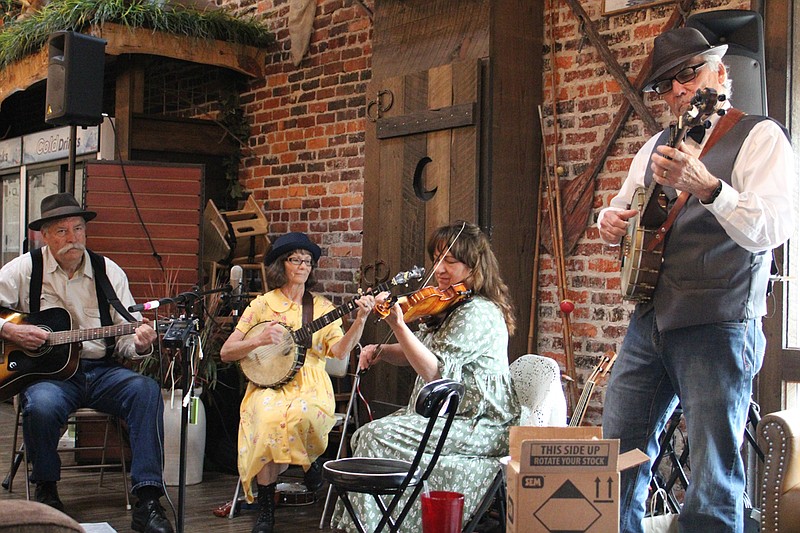 From left, Tom Sartain, Jenny Sartain, Judy Warner and Charlie Moore, the Arkansas Highlands String Band, perform at Crystal Ridge Distillery on Wednesday, April 14. It was the first time any of them have performed in front of a live audience in over a year. - Photo by Tanner Newton of The Sentinel-Record

Old Time music will return to Hot Springs today with multiple performances by the Arkansas Highlands Folk Project set to begin at 3 p.m. at 420 Eats Food Truck Court, which will likely be the group's final concert this year.

Several years ago, Charlie Moore, founder of AHFP, began working to spread awareness of Old Time music, a genre that predates country, rock and other more modern music. At today's show, "there's going to be three different performances there. The headliner is going to be Roy Book Binder," Moore said.

Binder is a professional touring musician who has worked with both BB King and Ray Charles, Moore said, noting his coming to town is due to COVID-19.

"He's a touring professional, he's won various awards for Blues and for Old Time traditional guitar, and he had a gig ... he had a performance scheduled for (today) in St. Louis," Moore said.

"The St. Louis venue canceled because of the COVID scare. It was an indoor event, and he has a student that lives here in Hot Springs, and he called him and asked if he could come down and do some kind of little performance," he said.

"He called me and asked if we could do a house concert or something and I said, 'Well let's do better than that,'" Moore said, "St. Louis' loss is our gain. He's quite a performer and a storyteller and he really is an entertainer."

Binder's student is local musician Ken Tillery, who will also perform, along with a group Moore plays in, the Arkansas Highlands Stringband.

Moore, with his bandmates Tom Sartain, Jenny Sartain, and Judy Warner, will open the show at 3 p.m. Binder will have two performances, at 4 p.m. and 5 p.m., and Tillery will close the show at 6 p.m.

This will be the fourth time the Stringband has performed live since they formed earlier this year. They previously performed at Crystal Ridge Distillery in April, and at the Arkansas Heritage Festival in Hot Springs Village in August and Timberfest in Sheridan earlier this month.

"It's a fun thing to do and we've had very good response from our audiences," Moore said.

Asked if the band has any upcoming performances planned, Moore said, "We don't, we're probably going to take a break through the end of the year then decide what to do next."

He said they have no "definite schedule yet," but will continue with their goal of promoting the Old Time traditions.

In addition to concerts, the Folk Project has also spent the past few years trying to educate the public about the music.

Moore said he has partnered with the Garland County Library to hold several virtual presentations with Paul Kagebein, the library's adult services programmer, noting they are working on holding another one of these programs.

"I just returned from a trip through Kentucky and West Virginia and North Carolina and Virginia and Tennessee, visiting with Old Time musicians, and it was a real treat visiting with the real deal in the mountains of those particular states," Moore said.

"And I did get some good interview recordings of a few of those, and Paul and I are working on preparing a program for the library that will showcase some of the folks that I got to talk to on that trip," he said.