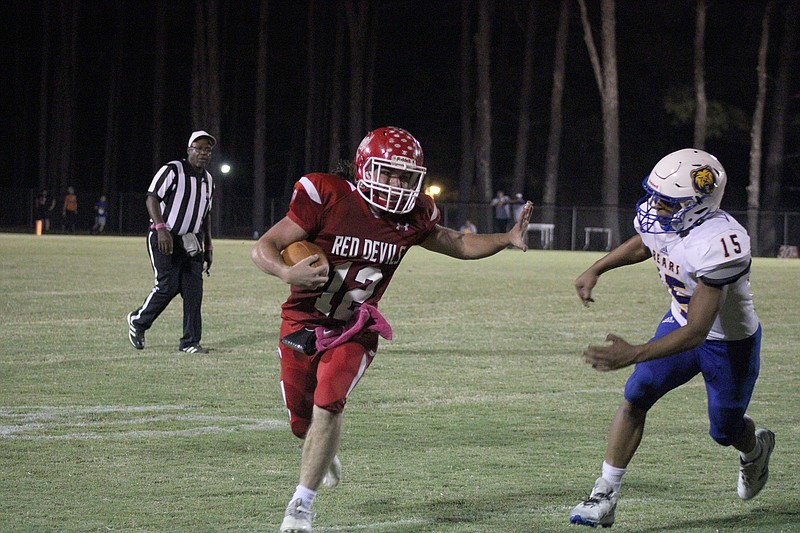 Mountain Pine’s Brice Langley (12) runs the ball as Spring Hill’s TJ Tipton moves in for a tackle in Friday’s game at Stanley May Field. - Photo by James Leigh of The Sentinel-Record

Trailing 42-36 at intermission, Spring Hill quarterback Levin McGuire found Colin Purifoy on a 60-yard pass for the end zone with 5:46 left in the third quarter. The pair connected a second time for a 44-42 lead.

The Bears picked up a first down on their second play of the ensuing drive before Miles picked off a pass from McGuire with 2:09 left in the third. Six plays later, quarterback Jonah Wilburn found Ty Ventress on a 7-yard pass, but the conversion play was no good, leaving the Red Devils up 54-44 with just 1:08 off the clock in the final frame.

McGuire connected with TJ Tipton for a 53-yard pass two plays later, but the Mountain Pine defense blocked the conversion pass for a 54-50 Red Devils lead with 10:08 left.

Spring Hill scored once more, on a 14-yard pass from McGuire to Purifoy with 57 seconds remaining, but the conversion failed. The team tried for a last-minute onside kick in hopes of turning the tide, but the Bears touched the ball at their own 48 to hand the Red Devils the victory.

The Bears hit paydirt first as McGuire hit TJ Tipton for a 22-yard pass to the end zone, finding Purifoy on the conversion play to take an 8-0 lead with 1:29 off the clock.

The Bears responded with a 46-yard touchdown pass from McGuire to Purifoy with Tipton running it in for the conversion and a 16-14 lead with 5:41 left in the opening stanza.

Both teams scored again in the quarter, Dobbins running it in from the 33 yard line before Tipton ran it in from the 5 to take a 24-22 lead with 45 seconds left in the first quarter.

After a 50-yard touchdown run by Dobbins with 9:34 and conversion by Matlock, McGuire connected with Purifoy to knot the score at 30 with 7:52 left in the half after a failed conversion.

Brice Langley ran the ball in from the 2 with 4:37 left before McGuire found Purifoy to again tie the game on a 66-yard pass with 3:38 to go.

Wilburn was 6-for-10 passing for 82 yards and a touchdown with Jayden Walker (18) and Keelan Dobbins (11) snagging a pair of receptions each. Glasco had a 46-yard reception.

Miles led the Red Devils on the ground with 17 carries for 218 yards and four touchdowns. Dobbins had 14 touches for 110 and two scores, and Matlock and Brice Langley added 62 and 53, respectively, with a touchdown apiece.

McGuire was 16-for-24 for 265 yards and six scores with Purifoy catching eight for 268 yards and five scores. Tipton led the team on the ground with 16 carries for 137 yards and two touchdowns.