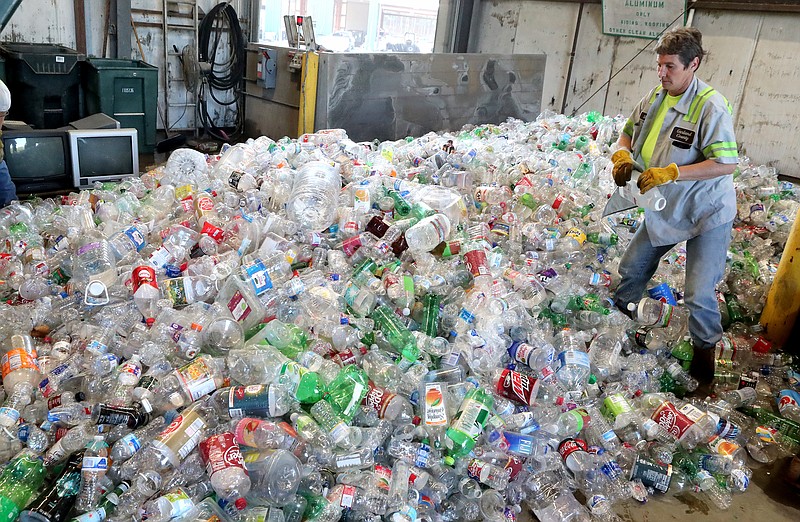 Cedar Glades Landfill employee Shelly Edwards sorts plastic the city of Hot Springs dropped off Tuesday at the landfill. - Photo by Richard Rasmussen of The Sentinel-Record

The repository for the county's construction and demolition debris, or Class 4 waste, the ever-swelling Cedar Glades Landfill rises unabated to the 250-foot limit permitted by the state Department of Environmental Quality.

It was designed for five, 12-cell phases when it opened in 2000. Keeping recyclables out saves the landfill air space, helping ensure the more than 60-acre footprint can absorb the century's worth of Class 4 waste for which it was designed.

The Arkansas Recycling Coalition has taken notice of the landfill's proficiency at separating recyclables from the unremitting waste stream that flows from a disposable society, conferring its Government Recycler of the Year award on the county.

"Our recycling program right now is probably one of the best I've seen, and I've been doing it a long time," Garland County Environmental Services Director Billy Sawyer said.

"Every ton of recycling we pull out saves air space at the landfill. Our outreach program is reaching so many people, and they're learning about recycling," he said. "Educating the public is one of the best things in the world. Most people just don't know."

Sawyer said the landfill strives to recycle up to 30% of the waste that crosses its scales.

"We want to encourage everyone to sole source," he said. "They sort it on their trailer and bring it here, and we help them unload it."

The county doesn't separate recyclables co-mingled with household garbage, or Class 1 waste, Town and Country Sanitation Inc. collects from more than 20,000 residential and commercial carts in the unincorporated area of the county.

The landfill is a pass-through for that waste, taking what Town and Country's haulers collect to the Saline County Regional Solid Waste Landfill in Bauxite. The landfill's truck drivers make six to eight trips a day to the Class 1 facility.

"We don't pull anything out from the haulers," Sawyer said. "We don't go into that trash at all. We do for all of our customers that come in. Their stuff is already sorted most of the time, and we pull it out."

Prior to that decision, the annual grant of about $260,000 funded the regional recycling facility at the city of Hot Springs' solid waste headquarters on Runyon Street. Clark and Hot Spring counties told the district board that continuing to use the grant on a facility that primarily benefited the city of Hot Springs didn't make sense, noting the cost of transporting their recyclables to Hot Springs had become cost-prohibitive.

The dissolution of the regional recycling program led to a partnership between Hot Springs and Garland County. A Hot Springs solid waste truck dropped off a load of plastic Tuesday at the Cedar Glades transfer station. The load was bundled into a 900-pound bale Sawyer said the county can sell for 15 cents a pound.

Hot Springs Solid Waste Director Randy Atkinson said the county takes all of the plastic from the city's recycling program.

"The guys sort it into different containers and throw out any contamination that people throw in there. When we bring it to the county, and they can back it up to the chute and dump it straight in because it's such clean material. It's a win-win for both of us," he said.

The county also takes all of the city's glass, Atkinson said. If the county has an overflow of cardboard, the city will take it and recycle it.

Sawyer said removing recyclables not only saves airspace at the landfill, it reduces operational costs.

"By the time you consider manpower, fuel, overhead costs, airspace, you're looking at savings of about $150 a ton to keep it out of our landfill," he said.

During the first quarter of the year, the landfill separated 388 tons of recyclables from waste the public brings to Cedar Glades and the county's two transfer stations on highways 7 north and 270 west. That's tonnage that won't be assessed the $2.50 the state charges for every ton of waste that goes into the landfill. The money funds the state's post-closure trust fund, which addresses pollution problems at closed landfills.

DEQ raised the fee from $1.50 per ton after the trust fund balance fell below $15 million in 2017. State law requires the fee increase if the balance falls below that threshold.

"We cut the chords off of anything that comes in and separate it into heavy and light wire," Sawyer said. "We're getting 7.5 cents per pound for our wire."

Bicycles are also salvaged and donated to Bikes for Kids, a program providing refurbished bikes to children.

"We get eight to 10 of them a day," Sawyer said. "Sometimes they look like they're brand-new. Last year we pulled over 2,500 bikes out of the trash." 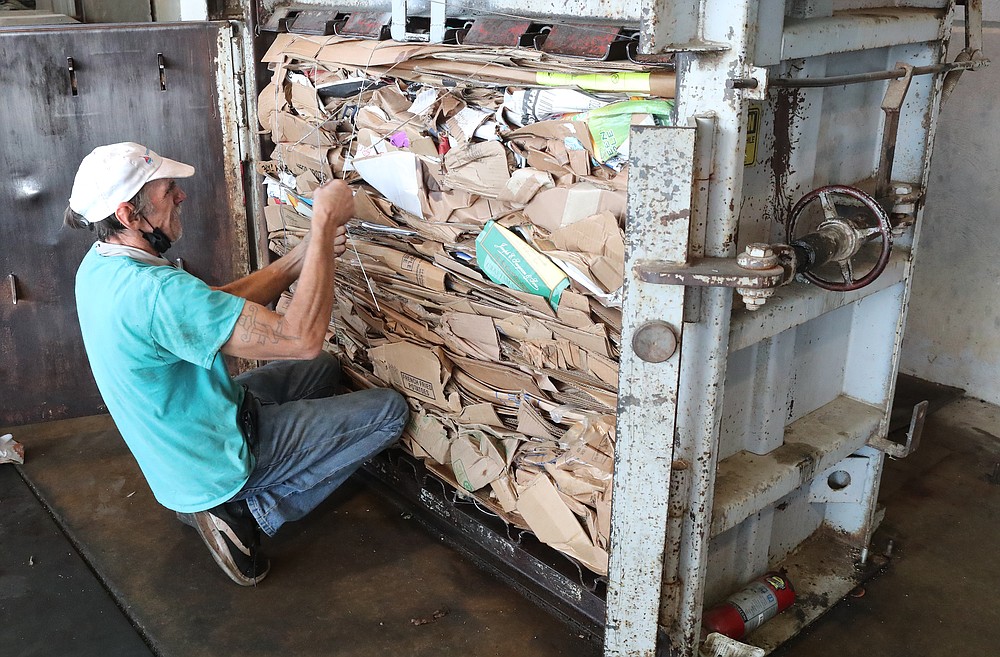 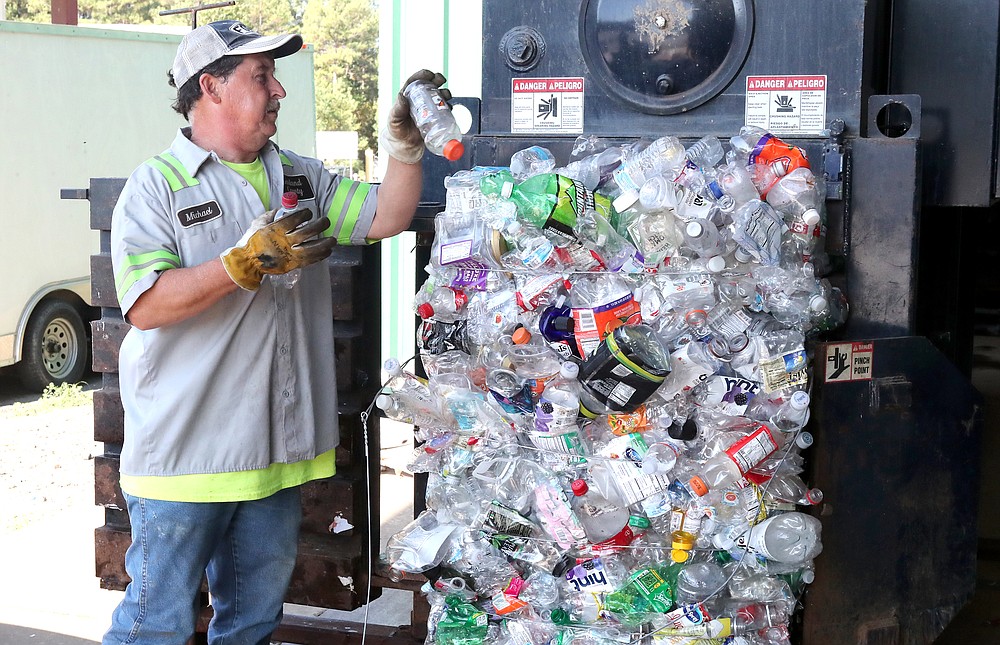 Cedar Glades Landfill employee Mike Andry puts plastic bottles into a baler Tuesday at the landfill. - Photo by Richard Rasmussen of The Sentinel-Record 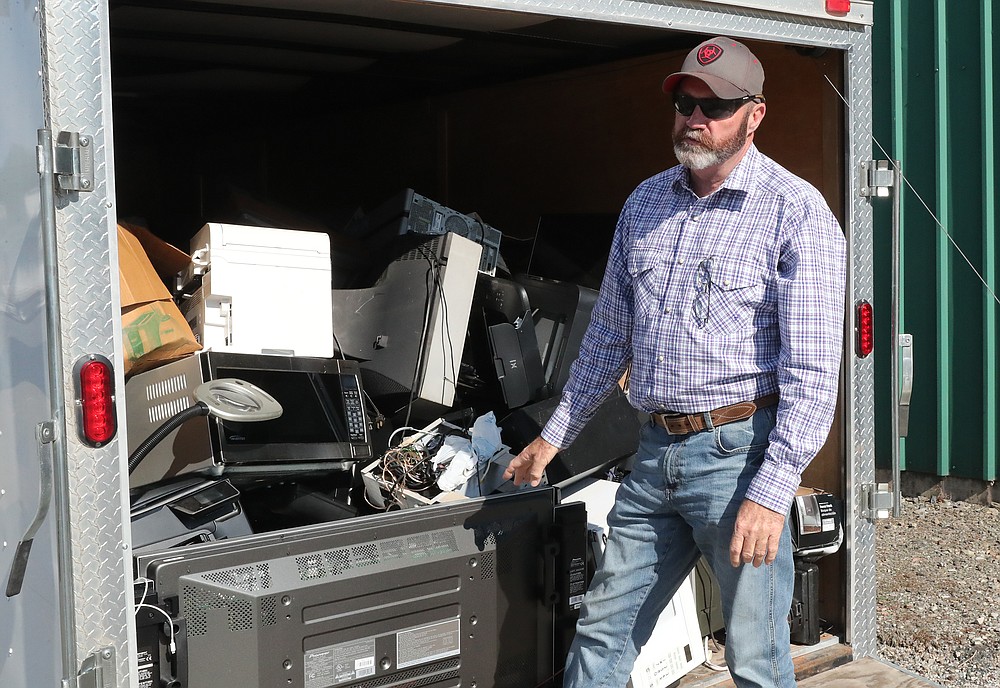