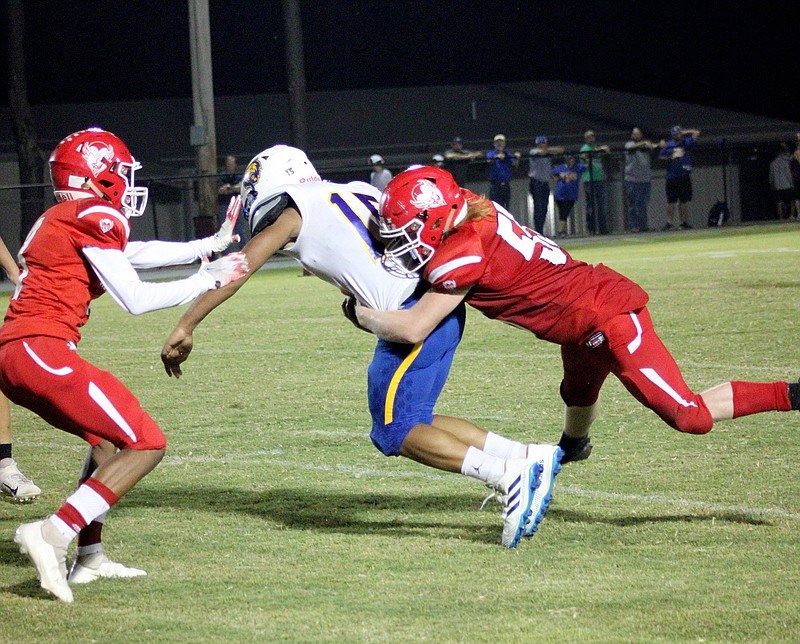 MOUNTAIN PINE -- Football fans that were in Mountain Pine for Friday's game between the Red Devils and the Spring Hill Bears got their money's worth.

For a game that was a rematch of last year's Eight Man Small School state championship, the teams played as if another title was on the line.

The Red Devils put up the same number of points as they did last November, but Spring Hill kept it close, taking the lead three times and tying it up twice before Mountain Pine put the game away.

One issue that plagued the Bears was their attempts at onside kicks. The visiting team kicked six onside kicks, and on four of the attempts, a Spring Hill defender touched the ball before it went 10 yards, turning it over to the Red Devils on the visitor's side of the field.

The Bears also struggled with penalties, drawing eight for 80 yards with the majority of those on defense (5 for 55). Mountain Pine picked up four penalties for 35 yards with three markoffs for 20 yards on offense.

The Red Devils controlled the clock, maintaining possession of the ball for over 63% of the game (30:22) while scoring on all but four of their 13 possessions. Despite that, the team struggled to tackle the Bears.

"We couldn't stop them," Mountain Pine head coach Sam Counce said. "No. 15, I think he's still running, you know, and then No. 4 played hard. He was -- they just threw it up to him, and we didn't have the height enough to get it. They made a lot of plays; we missed a ton of tackles. ... We're just luckt to come out there on top. Hats off to them; they played hard. They did a good job."

Counce said that this week in practice they will be making sure to put more focus on their tackling.

"We played a little soft on defense at times," he said. "They did some things to us, and we had, we did a lot of subs on defense. Our defense we just, we just play to soft sometimes, and it's up to me to get that corrected next Monday and Tuesday. That's what we were just talking about as coaches that we're gonna work on tackling next week. You know, that's one of those deals you think you're pretty good at it until you play and it bites you."

Regardless of the struggles on both teams, there was plenty of excitement for fans on both sides with several athletes scoring multiple touchdowns.

Isaiah Miles led the Red Devils with 17 carries for 218 yards and four touchdowns while Keelan Dobbins, who had 14 carries for 110 yards, scored twice. Dayjon Matlock had 12 touches for 62 yards and a score, and Brice Langley addeed 53 yards and a touchdown on 13 carries.

Quarterback Jonah Wilburn was 6-for-11 passing for 82 yards and a 7-yard touchdown to Ty Ventress. James Glasco led the receivers corps with a single reception for 46 yards.

The Bears did most of their damage in the air as quarterback Levin McGuire finished 16-for-24 passing for 365 yards and six touchdowns with one interception. Colin Purifoy tallied 268 yards and five touchdowns on eight receptions.

"He is definitely a dominant player at any level," Smith said of Purifoy. "He showed that tonight. He believes that. Not only that, he's a great golfer, too."

T.J. Tipton had five catches for 78 yards and a score, and he also had 16 carries for 137 yards and two more touchdowns.

The Bears host Marvell-Elaine Friday night while the Red Devils travel to Strong-Huttig.