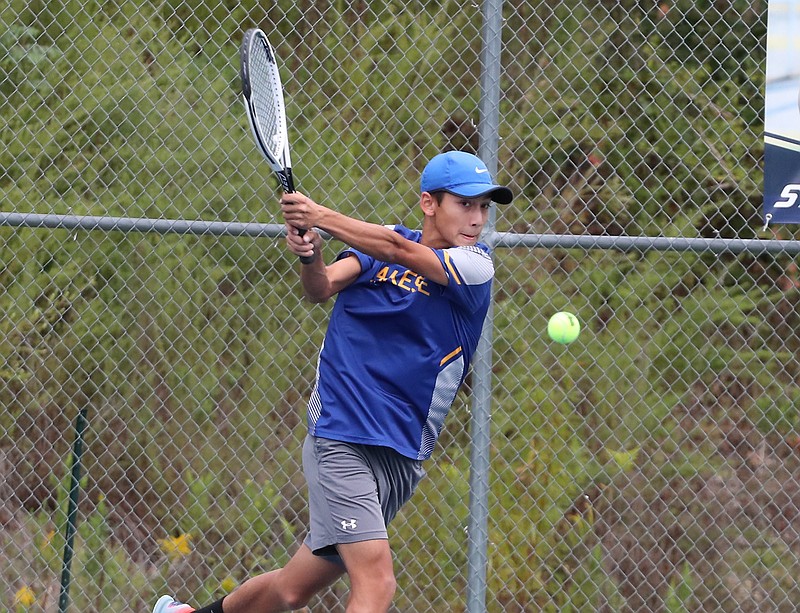 Lakeside enters the Class 5A state tournament today with one of its best chances to win in several years, despite the four-time defending state champion Jonesboro bringing in a strong team.

Once again hosting the state tournament, Lakeside won both the boys and girls 5A-South conference tournaments, which came as a surprise to head tennis coach Shawny Green.

"I'm really excited for our boys and our girls because it was an all-Lakeside finals, which was really unexpected," she said. "Our boys doubles teams were not the number one seed. My No. 2 doubles team of William Ivy and Griffin Gulley actually had to play the No. 1 seed from Lake Hamilton, Ty Richardson and Cai Condley, who had beat my No. 1 team already in the season, and they took them to three sets, and they ended up beating them. So that gave us an all-Lakeside finals for boys, and we were super excited about it."

The Rams top doubles team of Walker Wood and Greyson Cornelison ended up falling to Ivy and Gulley to take the conference's No. 2 seed into today's first day of the state tournament. Green said that she is excited to see how well the boys doubles teams are playing right now.

"I think our boys played probably as good as they have all season, and I hope that they can keep that momentum going into the state tournament," she said. "They've played some really good (Pulaski Academy) doubles teams and played well with them, and right now I just feel like they're playing really well together."

Both of the Rams' boys doubles teams are making their second-straight appearance in the state tournament as partners.

In boys singles, Ben Hollis, who was the conference champion, enters as the overall No. 2 for the state tournament.

"Ben is that kid that works his tail off," Green said. "He's playing tennis all the time. He's at the country club, hitting with Daniel (Cornelison) constantly. He loves it. He really pushes himself, and he wants to be the best. He's playing very well right now.

"Joe Patton is the No. 1 seed out from Jonesboro, and Ben Hollis is the No. 2 seed for the state tournament. And they played in the finals last year, and Ben lost in a third set tiebreaker. It was a hard loss. Ben played very well. I hope they both make it to the finals again this year."

In girls singles, Julia Malone and Sabrina Long faced off in a tough final after Long, who is just a sophomore, won in a three-hour long semifinal over Lake Hamilton's Sheyla Praetzel. Malone ended up dropping just one set in the final to take the conference's top seed.

"(Long) came out the winner in that third set, and she's a very good tennis player," Green said of her No. 2 singles player. "And she also loves it, and she works hard every day. You know, she's, she plays a lot. And so I hope that our girls can get it done."

The Lady Rams will have two freshmen paired with experienced players for the team's doubles teams. Senior Addison Dowdy and freshman Mia Francioni pair up while junior Elizabeth Cowen and freshman Lauren Latham pair up.

"They're the No. 1 doubles team, and Addison and Mia are the No. 2 for me," Green said. "And they finished first and second in the conference. Also. Elizabeth is an experienced tennis player; she's been playing for a while. Lauren is a ninth grader. I think she played a lot of tennis when she was younger. Her mom was a college tennis player, and she was a volleyball player. And she ended up -- I think she gave volleyball up and just decided to come out here and give tennis a try. And she's in the top six and playing very well right now."

Green is excited about the teams' chances this week, but she knows they have to get past the Hurricane.

While hosting the state tournament is a tough job, Green and assistant coach Lanea Bittinger continue to host it for the benefit of their teams.

"We would rather be able to host the state tournament," Green said. "We have beautiful facilities; we're able to use the country club. We're kind of a central location. Everybody -- I mean, who doesn't want to come to Hot Springs, right? So we would rather host it and let our kids be able to play on their home courts then have to travel somewhere else. So it is a lot of work and people don't realize what it entails, but we do it so our kids can play at home."

The boys tennis matches will be played at Hot Springs Country Club while the girls matches are to be held at Lakeside High School with all matches expected to start at 10 a.m.