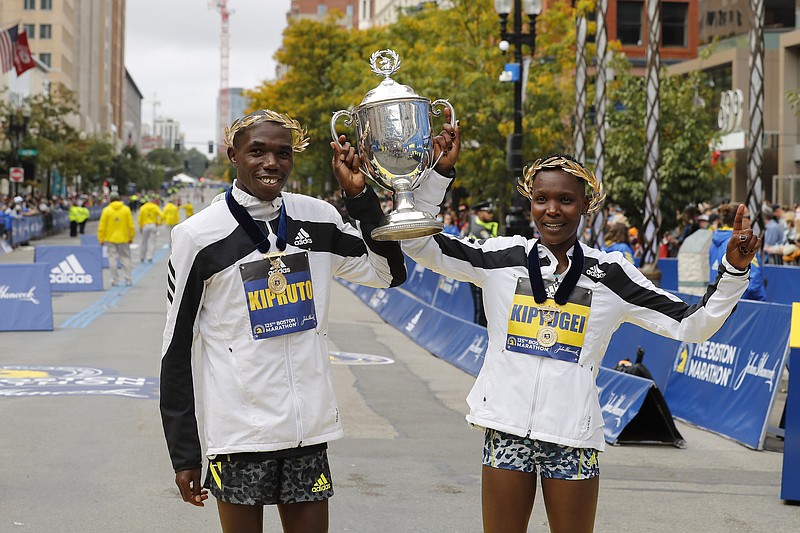 Benson Kipruto, left, and Diana Kipyogei, both of Kenya, celebrate winning the men's and women's divisions of the 125th Boston Marathon on Monday in Boston. - Photo by Winslow Townson of The Associated Press

The Associated Press n Benson Kipruto, left, and Diana Kipyogei, both of Kenya, celebrate winning the men's and women's divisions of the 125th Boston Marathon on Monday in Boston.

BOSTON -- With fall foliage replacing the blooming daffodils and mylar blankets sharing space with masks, the pandemic-delayed Boston Marathon returned Monday after a 30-month absence for a smaller, socially distanced race that ended in a very familiar way.

Benson Kipruto and Diana Kipyogei completed a Kenyan sweep -- the eighth since 2000 at the world's oldest and most prestigious 26.2-miler, which moved from its traditional spring date for the first time in its 125-year history because of the coronavirus outbreak.

"We were injured, wounded. Now is the comeback story," said 2014 winner Meb Keflezighi, one of the past champions sharing grand marshal duties with hospital employees who worked through the pandemic. "Hopefully this is an example that post-pandemic, life is getting back to normal."

Although organizers put runners through COVID-19 protocols and asked spectators to keep their distance, there were still sizable crowds in spots from Hopkinton to Boston after an early drizzle cleared and temperatures rose into the 60s.

Participants in the field of 18,000 -- down from more than 30,000 in pre-pandemic days -- needed to test negative for the coronavirus or prove they were vaccinated before picking up their bib numbers. Masks were required indoors in Boston and on the buses out to the start; they also were handed out along with the finishers' medals and fruit on Boylston Street.

The race also began earlier and with a rolling send-off to avoid the usual crowding in the starting corrals and on the course.

None of the changes proved a problem for the Kenyans.

"There's not a lot different on the course," Kipruto said.

A winner in Prague and Athens who finished 10th in Boston in 2019, Kipruto broke away from the lead pack as it turned onto Beacon Street with about three miles to go and broke the tape in 2 hours, 9 minutes, 51 seconds. Lemi Berhanu, who won the race in 2016, was second, 46 seconds back; Colin Bennie of Princeton, Massachusetts, was the top American, in seventh.

Kipyogei claimed the women's title, a gilded olive wreath and the $150,000 first prize, finishing in 2:24:45 in her major marathon debut. Edna Kipligat, the 2017 winner, was second, 23 seconds behind.

Hug, who has raced Boston eight times and has five victories here, cost himself a $50,000 course record bonus when he missed the second-to-last turn, following the lead vehicle instead of turning from Commonwealth Avenue onto Hereford Street.

"At the moment I'm really upset," said Hug, who finished second in the Chicago Marathon by 1 second on Sunday. "I hope in an hour, two hours, I'll feel more happy."

Kipruto waited out an early breakaway by CJ Albertson, who led by as many as two minutes at the halfway point but slowed in the Newton Hills and fell behind near Boston College. Albertson, who is the world record-holder in the 50K (42.2 miles), finished 10th.

A Fresno, California, native, Albertson said he tried to keep things interesting during the pandemic by binging on Peloton classes; he finished atop the leaderboard 57 times and also set a record by running a 2:09 marathon on the treadmill.

"I was just bored and unmotivated, trying to find something to do. I just made stuff up," he said. "Having a race like Boston ... actually racing and competing with the world's best in one of the best atmospheres there is to run in -- second to Fresno -- nothing else compares. This was an amazing day."

Recreational runners streamed across the Back Bay finish line into the afternoon, turning to the sidewalks and pumping their arms to prompt the thinner crowds alongside the course to cheer.

On Boylston Street, spectators lined up shoulder to shoulder, with few wearing masks; Boston requires them indoors. Some said they weren't concerned about COVID-19 since they were vaccinated and outside.

A rolling start and shrunken field allowed for social distancing on the course, as organizers tried to manage a changing pandemic that forced them to cancel the race last year for the first time since a group of Bostonians returned from the 1896 Athens Olympics and decided to stage a marathon of their own.

Since then, the race has persisted through World Wars and even the 1918 Spanish flu pandemic. But it was first postponed, then canceled last year, then postponed from the spring in 2021.

It's the first time the event hasn't been held in April as part of the Patriots' Day holiday that commemorates the start of the Revolutionary War. To recognize Indigenous Peoples Day, race organizers honored 1936 and '39 winner Ellison "Tarzan" Brown and three-time runner-up Patti Catalano Dillon, a member of the Mi'kmaq tribe.

Police were visible along the course as authorities vowed to remain vigilant eight years after the bombings that killed three spectators and maimed hundreds of others on Boylston Street near the Back Bay finish line.

A light rain greeted participants at the Hopkinton Green, where about 30 uniformed members of the Massachusetts National Guard were the first to leave, at 6 a.m. The men's and women's wheelchair racers -- some of whom completed the 26.2-mile (42.2 km) distance in Chicago a day earlier -- left shortly after 8 a.m., followed by the men's and women's professional fields.

"We took things for granted before COVID-19. It's great to get back to the community and it puts things in perspective," said National Guard Capt. Greg Davis, 39, who was walking with the military group for the fourth time. "This is a historic race, but today is a historic day." 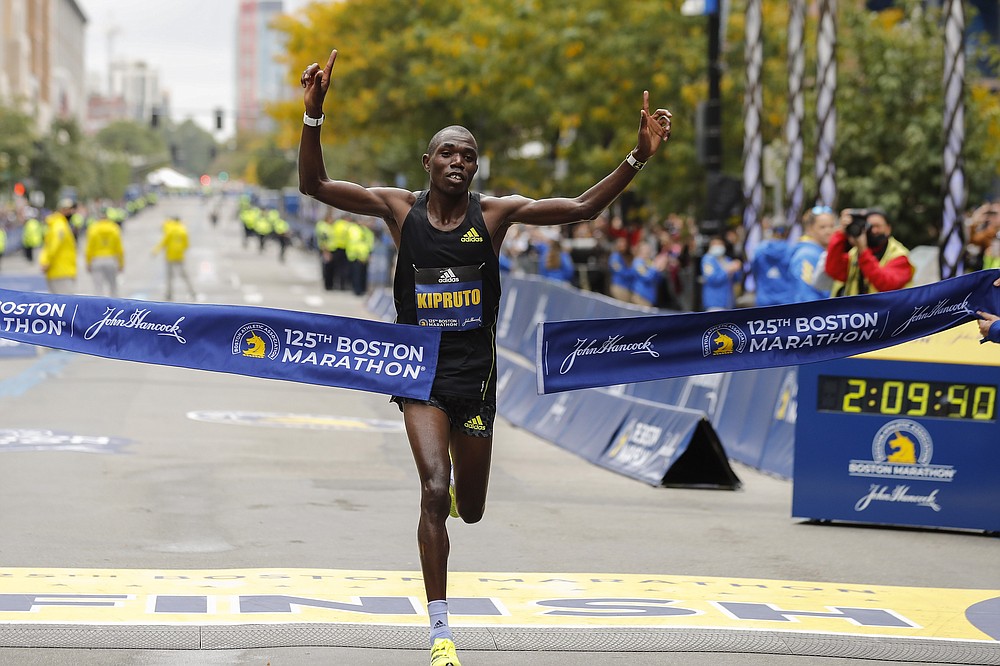 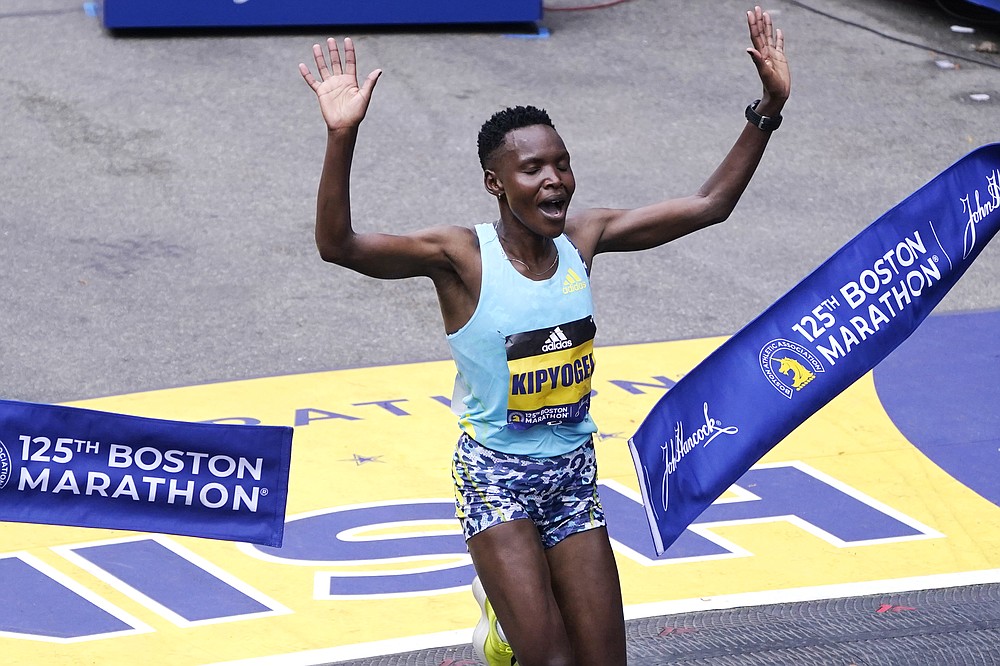 Diana Kipyogei, of Kenya, celebrates at the finish line after winning the women's division of the Boston Marathon in Boston, Monday, Oct. 11, 2021. (AP Photo/Charles Krupa) 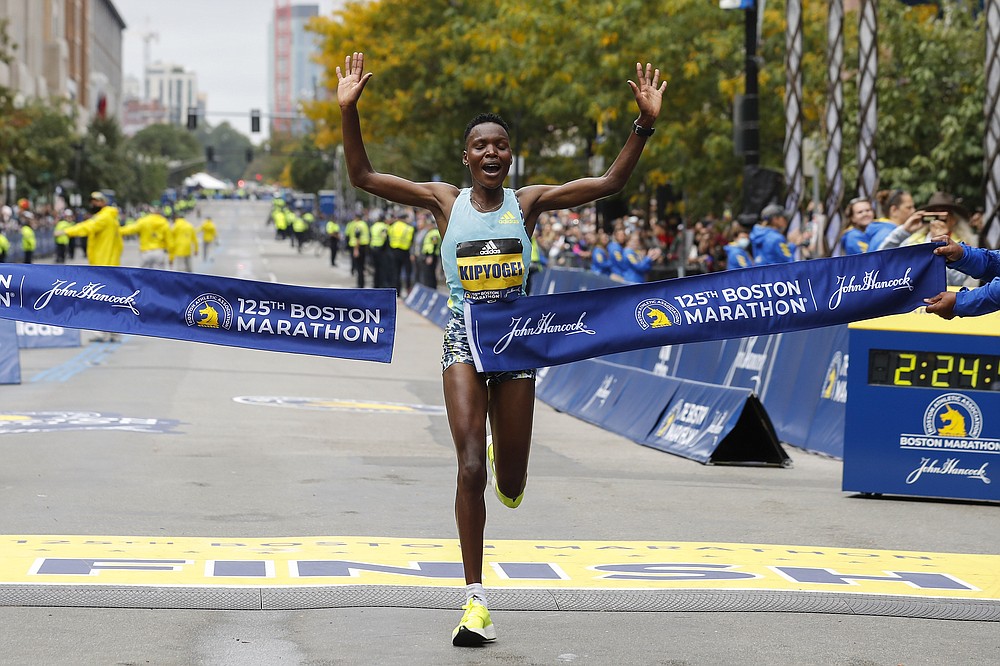 Diana Kipyogei, of Kenya, hits the tape to win the women's division of the 125th Boston Marathon on Monday, Oct. 11, 2021, in Boston. (AP Photo/Winslow Townson) 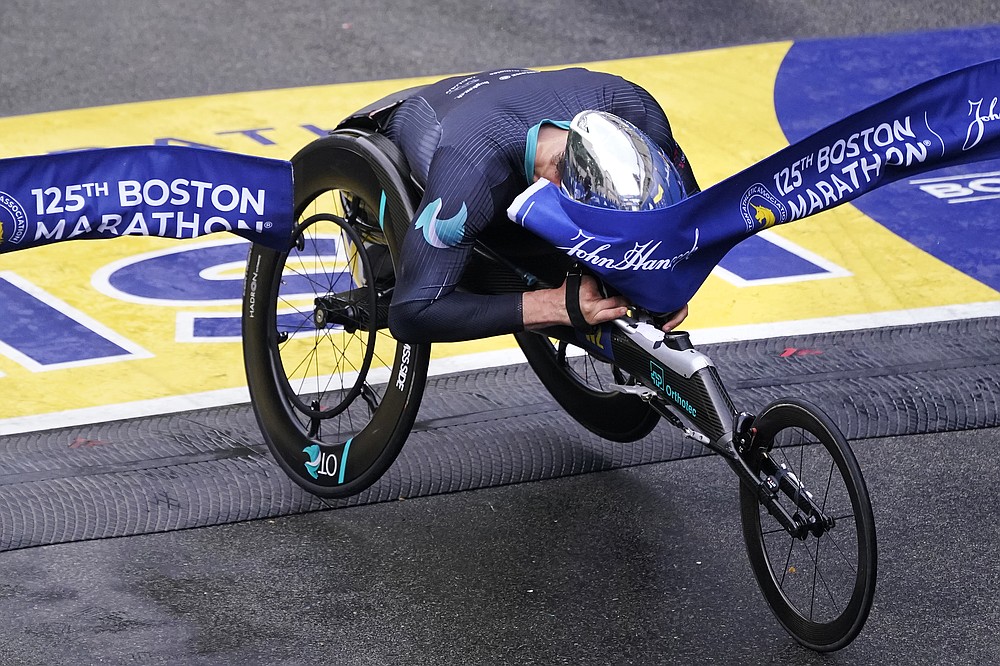 Marcel Hug, of Switzerland, breaks the finish line with his helmet to win the men's wheelchair division at the Boston Marathon in Boston, Monday, Oct. 11, 2021. (AP Photo/Charles Krupa) 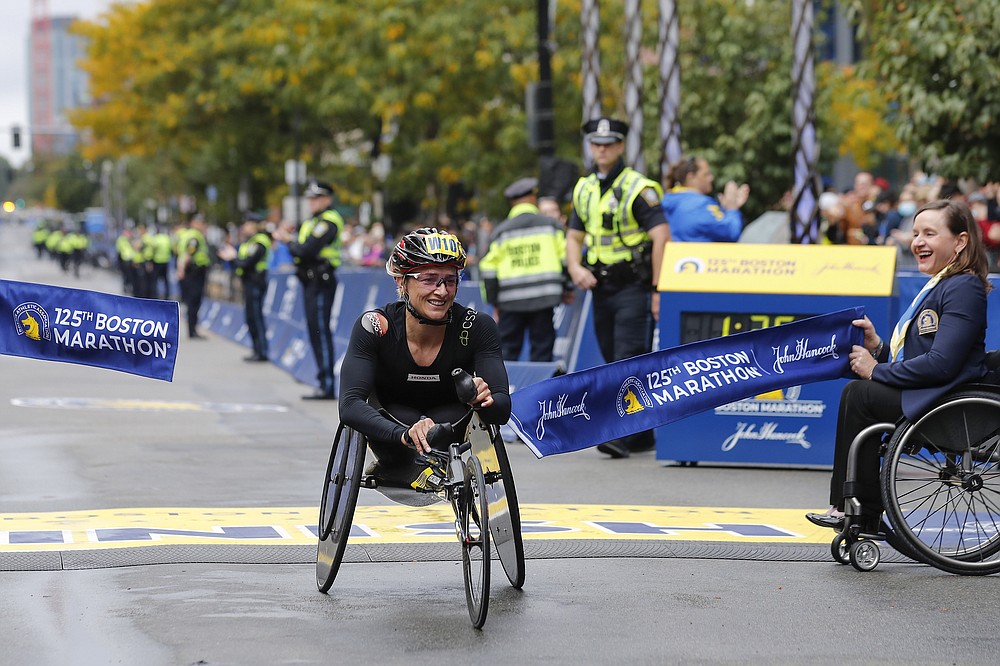 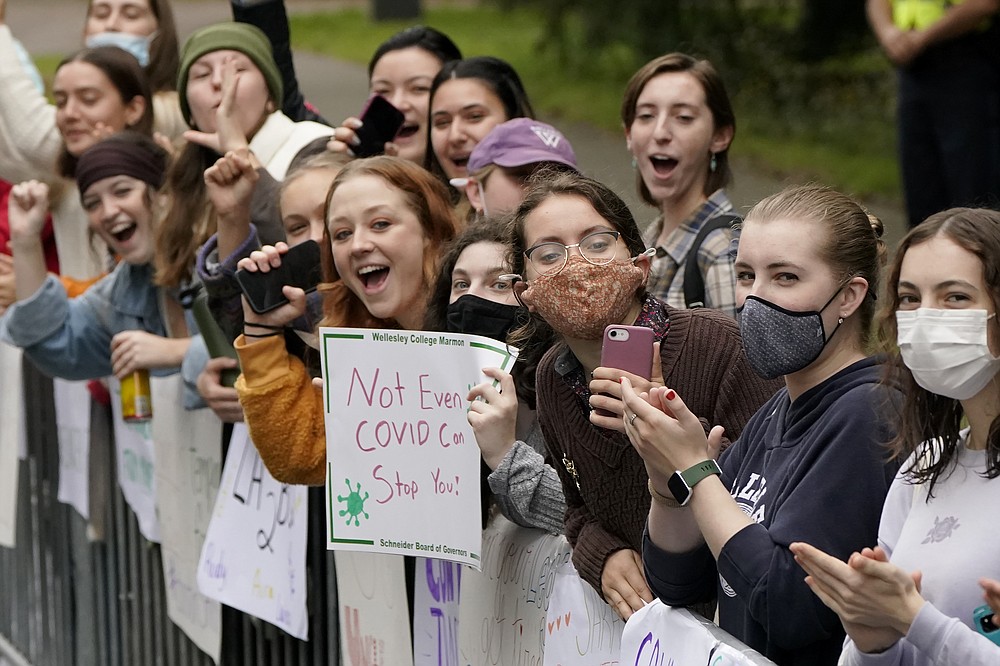 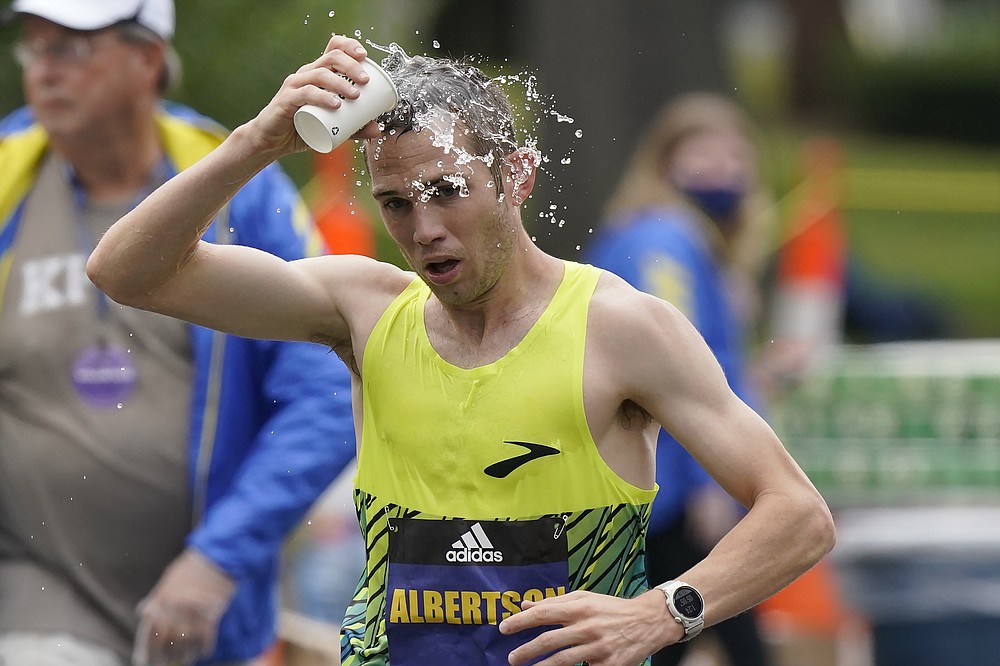 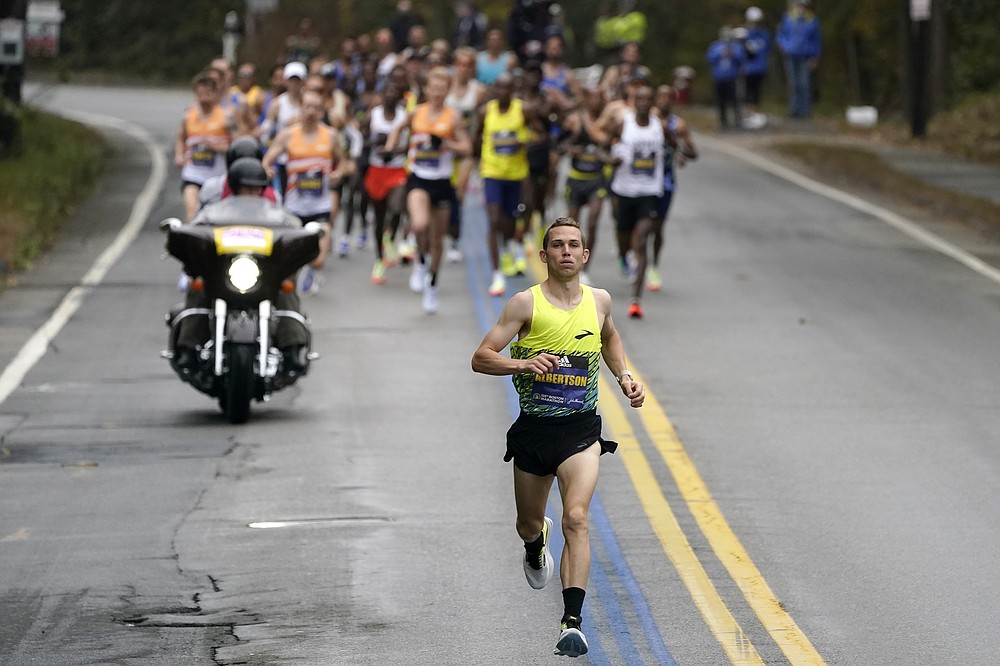 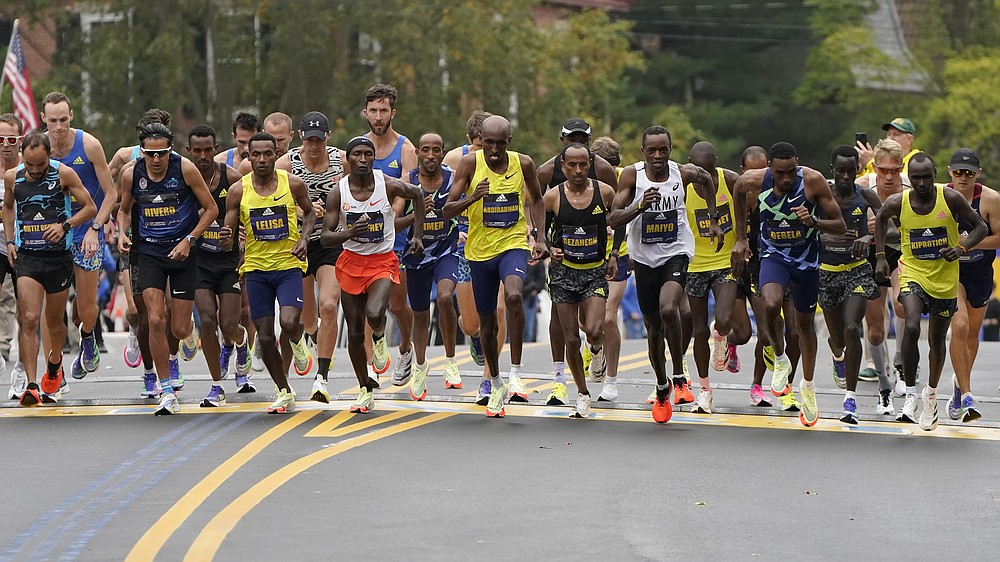