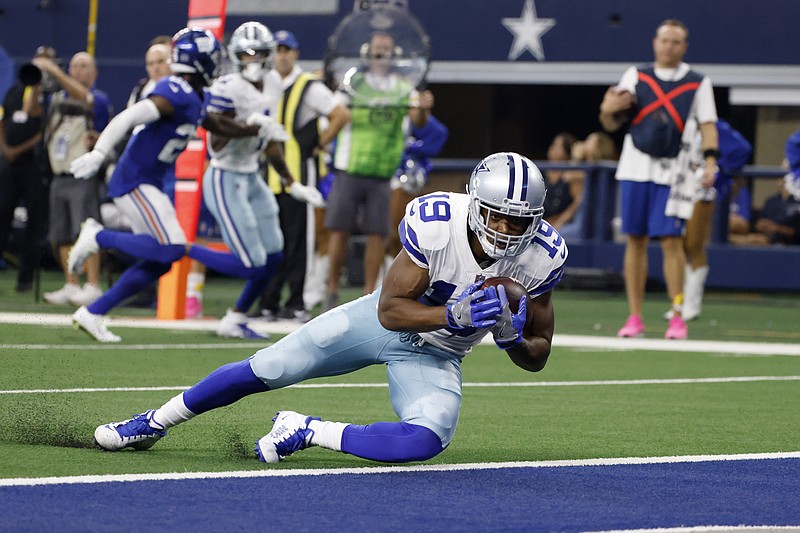 Dallas Cowboys wide receiver Amari Cooper catches a touchdown pass in the first half of an NFL game against the New York Giants in Arlington, Texas, Sunday. - Photo by Ron Jenkins of The Associated Press

ARLINGTON, Texas -- Amari Cooper rejected the suggestion that Dallas' 44-20 win over New York was even more impressive because of a sloppy start that kept the last-place Giants in the game longer than they should have been.

The receiver's reaction illustrates where the Cowboys think they can go after four consecutive victories coming off a last-second loss to Super Bowl champion Tampa Bay in the opener.

"We don't need to have those mistakes," said Cooper, who had a 24-yard touchdown catch. "It's about us and our standard, who we're trying to be, where we're trying to go."

Cooper isn't denying where that is with Dallas (4-1) already leading the NFC East by two games going into Sunday's trip to New England. Never mind that it's a place the Cowboys haven't been since the 1995 season.

"When you're on a roll like this, you start thinking about a Super Bowl. That's just the reality of it," Cooper said. "You start to want it more and more the closer you get, and you start to worry about the little things more."

The mistakes were two first-quarter turnovers by quarterback Dak Prescott, the first an interception that stopped the opening drive and the second a botched snap and fumble when Dallas was on the New York 5-yard line.

Prescott bounced back with 302 yards passing and three touchdowns against the same opponent in the same stadium on the same weekend as the season-ending compound fracture of his right ankle last year. Prescott can finally say the injury is behind him for good.

"I hugged (athletic trainer) Britt Brown there at the end and said I know what this meant," Prescott said. "I told him thank you and I'm glad it's behind us. I think this was the final shovel in burying this thing."

Tight end Blake Jarwin's role in the offense remains a mystery when he figured to thrive in offensive coordinator Kellen Moore's scheme in his return from a knee injury that sidelined him after Week 1 last year. Jarwin was shut out for the first time this season against New York while Dalton Schultz had a team-high six catches for 79 yards. While Jarwin finally had his first TD last week, he has just nine catches for the year. Schultz leads the Cowboys with 26.

The running back tandem of two-time rushing champ Ezekiel Elliott and backup Tony Pollard is turning into something special. Both had more than 100 scrimmage yards against the Giants. Elliott had 110 yards rushing with a touchdown and a 4-yard receiving score. Pollard finished with 75 rushing and 28 receiving. Pollard never had consecutive games with at least 60 yards rushing in his two-plus seasons before his current streak of four games with at least that many.

The pylons, at least according to Elliott. He missed two plays getting his back checked when he fell on a pylon, which have cameras in them. And that's not the only hard spot on them, Elliott said. "I think it is foamy, but it's hard," said Elliott, who said he also felt pain in his ribs. "The base of it is hard, too. It's definitely not soft. It definitely hurt. It kinda stabbed me. I lost my wind."

Executive vice president of personnel Stephen Jones said the Cowboys came out of the game in good shape. With one more game before the open week, the Cowboys might hold off on bringing back S Donovan Wilson (groin), DE Dorance Armstrong (ankle) and WR Michael Gallup (calf).

The Cowboys are 0-5 against the Patriots in the Bill Belichick era, and the overall losing streak is six going back to 1999. The most recent Dallas win was in 1996, the most recent time the Cowboys were defending Super Bowl champs. Beating a six-time Super Bowl winner in Belichick would give the Cowboys another reason to believe they're building something, even with New England not on a championship level. 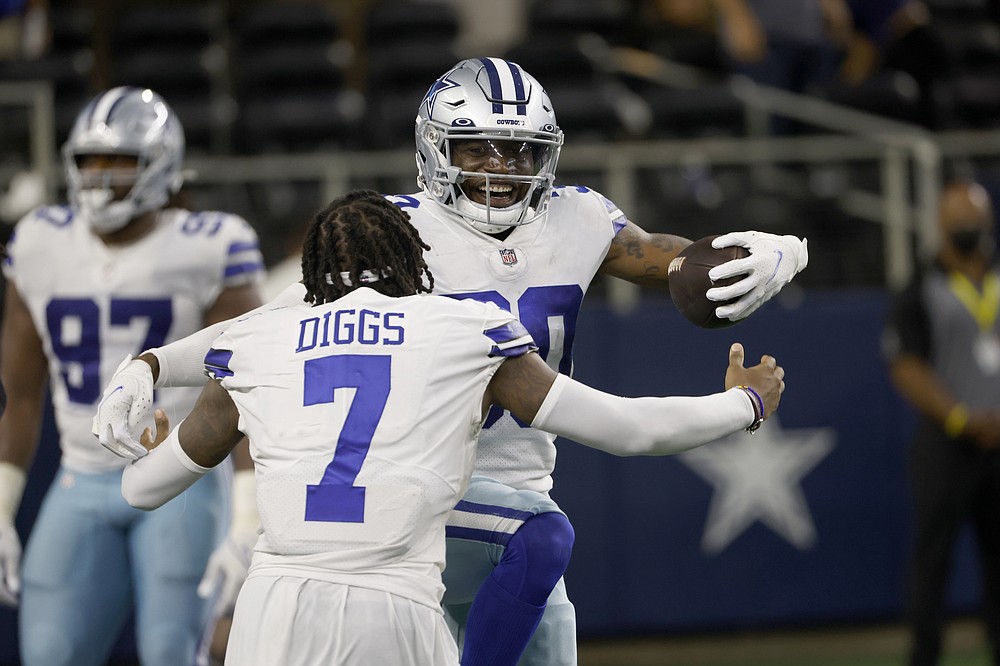 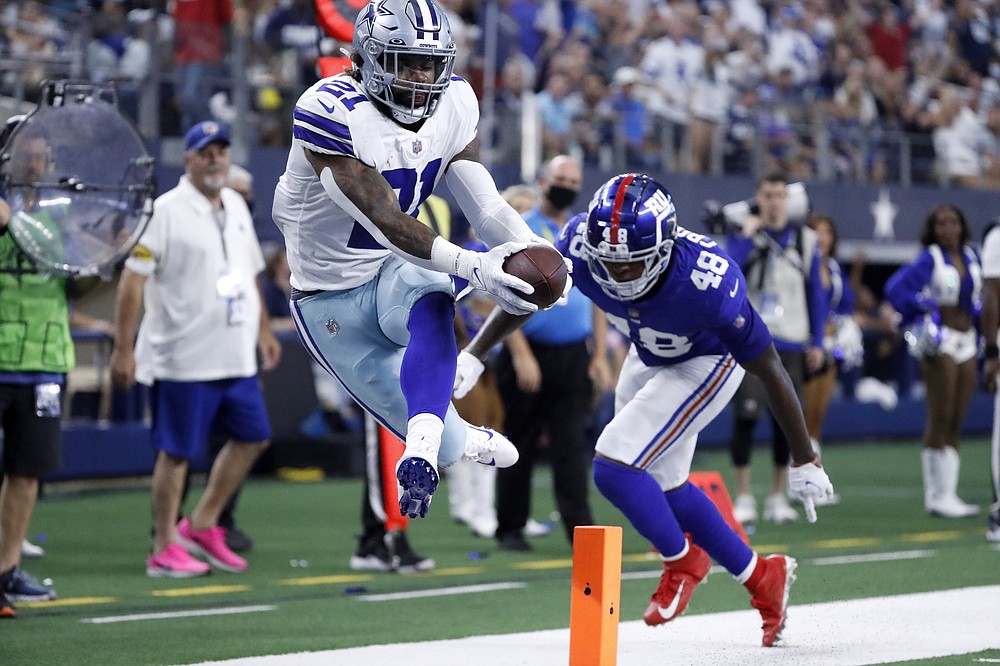 Dallas Cowboys running back Ezekiel Elliott (21) reaches into the end zone to score a touchdown after getting through New York Giants linebacker Tae Crowder (48) in the second half of an NFL football game in Arlington, Texas, Sunday, Oct. 10, 2021. (AP Photo/Roger Steinman) 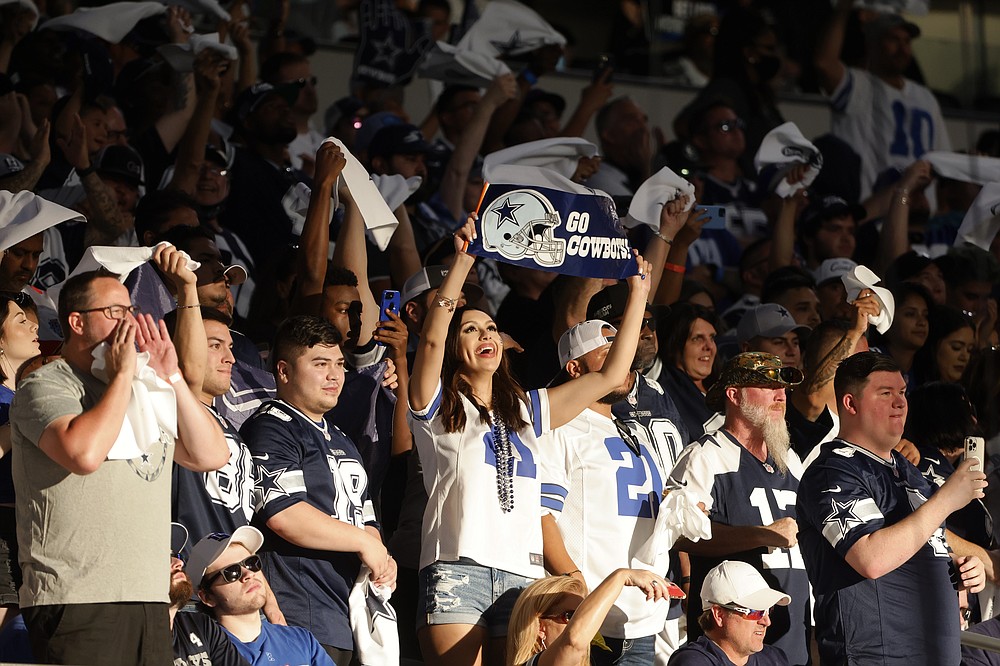 Fans cheer late in the second half of an NFL football game between the New York Giants and Dallas Cowboys in Arlington, Texas, Sunday, Oct. 10, 2021. (AP Photo/Michael Ainsworth)