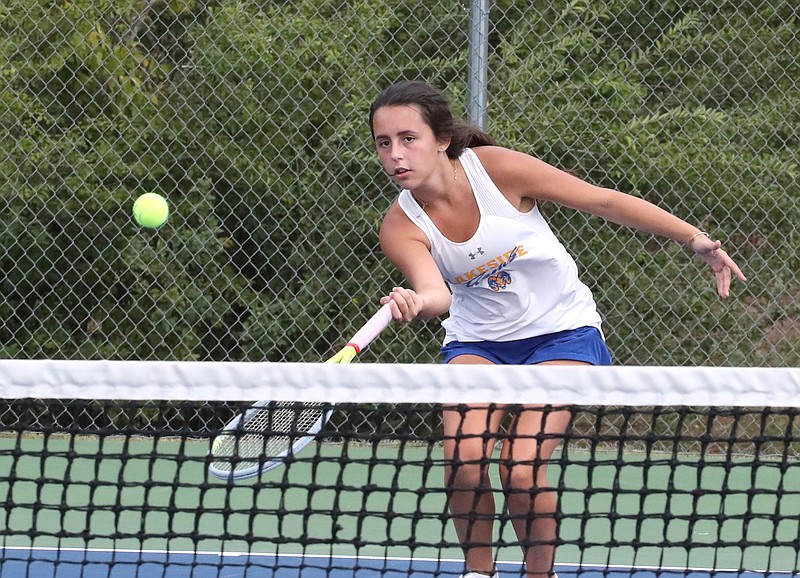 Lakeside's Julia Malone returns the ball during action at the Class 5A State Tennis Tournament at Lakeside High School Monday. - Photo by Richard Rasmsusen of The Sentinel-Record

The Jonesboro senior took down Vilonia's Chloe Lane 6-0, 6-2 in the first round before blanking Lakeside's Sabrina Long in straight sets to advance to the semifinals.

Payne said the wind affected play a lot more than one might think, and it made the ball harder to judge in multiple situations on the day.

"The wind was definitely a factor for everybody playing, so it was a little complicated trying to manage the balls," she said. "But again everybody has to deal with it, and luckily I was able to overcome those, and it's looking good. I'm just hoping I can kind of carry this momentum into (Tuesday)."

Coming into the tournament as the three-time defending state champion, Payne said she wants to welcome the pressure this year and not let it consume her.

"I think this tournament is one of my biggest tournaments all year just because everybody is looking at me in that kind of perspective," she said. "It can be really tough. I was definitely nerve-wracked on my way down here right before my first match. I normally play better as the tournament goes on, so I'm hoping that stays the case. Everybody kind of expects it, which is a little frightening, but again I'm trying to welcome the pressure"

Although Long lost in the semifinals, the sophomore took the match as a learning experience and complimented the defending state champion throughout the contest.

"I think playing people who are way better than you really makes you improve at a faster rate," Long said after her first-round win. "It makes me feel pretty good (winning at home). Second year on the team, and I'm already at state, so I'm pretty happy about that."

During Long's first round 6-4, 6-3 win over Little Rock Christian's Katherine Gilliam, the sophomore fell behind 3-1 in the second set but battled back to win the last five games.

"I hit some good balls, I think," Long said. "I also hit some really bad ones because of the wind. ... Oh my gosh, (it affected me) so much. There were so many balls just a bit out that would have been on the line or like I couldn't do my serves as well, but I finally got into it. I was happy about that."

Payne will face Mountain Home's Macie Heide in the semifinals today after Heide defeated Searcy's Haley Tancino 6-0, 6-3 in the first round and Beebe's Rivers Martin 6-3, 6-2 in the second.

Although Heide said she got lazy at times during the first and second rounds, she felt her overall performance on the day was good, and just like Payne and Long, she emphasized the effect of the wind on the day.

"The wind was something today," Heide said. "On one side, I could hit the ball as hard as I could, and on the other side I could just barely tap it, and it would still go out. It messed me up so bad."

Heide added that she's feeling pretty confident in her play, but she did acknowledge her big time opponent in the semifinals.

"I'm a little nervous, but I've played her before, so I mean it's nothing new," she said. "Just excited I got to (Tuesday)."

On the other side of the bracket, Parkview's Emmory Simmons blanked Lake Hamilton's Julia Ballestros before beating Van Buren's Abby Saniseng 6-0, 6-1 in the second round.

Simmons will face Siloam Springs' Olha Los in the semifinals. Los beat Searcy's Alyssa Day 6-1, 6-0 to start the day and took down Lakeside's Julia Malone in a hard fought 6-4, 6-3 victory.

Los said she felt like she didn't play her best in her two matches, but she looks to improve in the semifinals.

"Just play my best and not be afraid to hit my shots because I know I can do better," she said.

Lake Hamilton's Sheyla Praetzel also competed in the first round and just fell to Martin 7-5 in the first set before losing the second 6-1.

Another Jonesboro duo, Anna Parker and Easton McDaniel, eliminated yet another Lakeside team in the second round. The pair took down Elizabeth Cowen and Lauren Latham 6-4, 3-6, 6-3 to advance to the semifinals to face West Memphis' Samantha Holt and Taylor Brosett.

Play is set to start at 10 a.m. for the semifinals at Lakeside High School today.