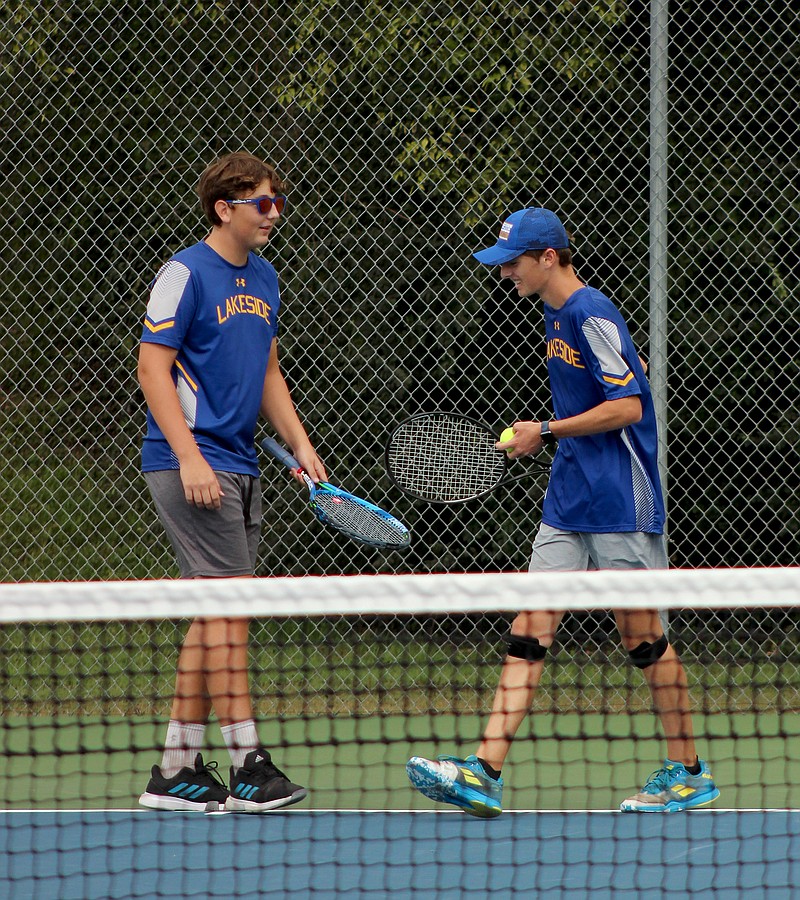 Lakeside’s Greyson Cornelison, left, and Walker Wood congratulate each other after winning a point during their doubles match against Beebe's Lucas Young and Abram Chapman at Hot Springs Country Club Monday. The pair advanced to today's semifinal round, which will be played at Lakeside High School. - Photo by James Leigh of The Sentinel-Record

A year after winning third at the Class 5A state tennis tournament with a win over a Greenwood team, Lakeside's top doubles team of Greyson Cornelison and Walker Wood advanced to today's semifinals with a win over another Bulldogs team.

J.J. Acosta, who was half of Greenwood's fourth-place team a year ago, and Brendan Hoskyn faced off against Cornelison and Wood in Monday's second round.

Acosta served up the first game, taking the win before Wood and Cornelison won the next three games to take a 3-1 lead. The two pairs traded points before Cornelison had a pair of long returns to allow the Greenwood duo to pull within 3-2.

The Rams duo allowed just two points in the next three games to take a 6-2 win of the first set.

Acosta again served up for the first game of the second set, earning the win after Cornelison sent a return wide. Lakeside won the next three games, but the Greenwood duo powered back to draw the set at three games apiece.

Wood and Cornelison pushed out to a 5-3 lead before Acosta and Hoskyn dropped a single point in the next game to pull within 5-4. Hoskyn then hit two returns long before dropping one into the net to set up match point, and Wood sent a cross between the Greenwood duo to secure the win and an appearance on the second day of the tournament.

"I think we started moving more," Cornelison said of what eventually turned the tide for him and Wood. "Again, like we slowed down whenever they started coming back, and then we moved more, stopped getting into them right up the court."

Wood said that he felt that he and Cornelison played well on the day. The pair defeated Beebe's Lucas Young and Abram Chapman, 6-1, 6-2, in the first round.

"I feel like we played well," he said. "We had a lot of good competition and back and forth. So I'm just happy that we're able to pull it out and work together."

With winds of 10-14 miles per hour pervading throughout the day and gusts of up to 21 mph hitting the courts late in the afternoon, Cornelison said that it definitely made playing more difficult.

"It's been rough," he said after his second-round match. "I'm taking a step into the wind every time, and then it helps in the morning because my spin goes into the wind, so it just pulls it out even more."

Lakeside's William Ivy and Griffin Gulley also advanced to today's semifinal round after a 6-0, 6-2 win over Mountain Home's Alex Arp and Jacob Czanstkowski. Lake Hamilton's two doubles teams -- Ty Robinson and Cai Condley and Peter Bobnar and Austin Praetzel -- advanced to the second round, but they both faced off against Jonesboro teams in the afternoon and fell.

Lakeside's Graham Dolan fell to Little Rock Christian's Andrew Griffith in the first round, 6-2, 6-4. The loss left both Lakeside and Jonesboro with one singles player each and two doubles teams.

Connor Bailey, an Arkansas School for Math, Sciences, and the Arts student who plays for Hot Springs, fell in straight sets to Beebe's JD Martin.