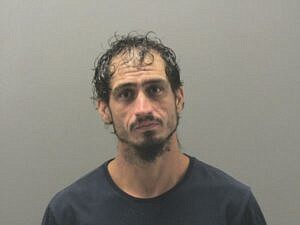 A local man previously convicted of rape in Oregon was arrested Monday following a traffic stop after Garland County sheriff's deputies allegedly found a gun in his vehicle.

Brian Keith Vanantwerp, 35, who lists an Elmhurst Street address, was taken into custody shortly after 12:30 p.m. and charged with a felony count of possession of a firearm by certain persons, punishable by up to 20 years in prison.

Vanantwerp, who was also cited for driving on a suspended driver's license, speeding, not wearing a seat belt and improper turn signal, was later released on a$5,000 bond and is set to appear Oct. 29 in Garland County District Court.

According to the probable cause affidavit, around 11:45 a.m., sheriff's Sgt. Jon Lane made a traffic stop on a blue Chevrolet Silverado for speeding, improper turn signal and because the driver and passenger were not wearing seat belts.

As he approached the vehicle, Lane reportedly noted the smell of burning marijuana coming from the truck. As he asked the driver, later identified as Vanantwerp, for his license and registration, he noted both he and the male passenger, 33, "got very nervous" and then the passenger "got very angry" and "kept reaching around and trying to get out of the vehicle."

Lane radioed for backup and Deputy Chandler Overton and other deputies arrived to assist and they got both men out of the vehicle. While checking the vehicle, Overton reportedly found a black revolver between the driver and passenger seats and some containers of medical marijuana.

Vanantwerp made a spontaneous statement that the revolver was his and he had a medical card for the marijuana.

A computer check showed Vanantwerp was a registered sex offender with a felony rape charge out of Oregon in 2006 and several other felony charges out of Texas.

Vanantwerp was charged with possession of a firearm by certain persons with the penalty enhanced due to his prior violent felony conviction. The passenger reportedly had a warrant for failure to appear and was also cited for not wearing a seat belt.