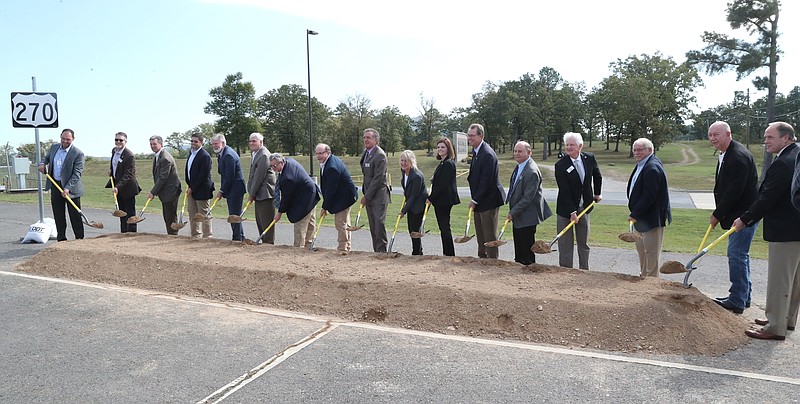 Elected officials and state highway commissioners turn dirt at Tuesday’s groundbreaking for the Highway 270 west widening from the Highway 227 junction to Fleetwood Drive. - Photo by Richard Rasmussen of The Sentinel-Record

Drivers will soon see the orange harbingers of progress on the 1.5-mile segment of Highway 270 west from the Highway 227 junction to Fleetwood Drive. The dirt-turning ceremony the Arkansas Department of Transportation held Tuesday at its District 6 Garland County Area Maintenance Office signaled the start of widening the two-lane stretch to four travel lanes, a turn lane and bicycle lanes.

"You have to live through the orange barrels," Mahoney said at the ceremony. "If we took an orange barrel count in Garland County right now we'd probably rank among the top, because we have a lot of construction going on here. Every day we get a little more accessible. Since we live off tourism here, that's what we need."

ArDOT Director Lorie Tudor said the widening will be completed by the end of 2023. ArDOT awarded McGeorge Contracting Co. of Little Rock the $22,614,576 contract for the project, an outlay that's 75% higher than the estimated $12.8 million cost listed in the fiscal years 2021-24 Statewide Transportation Improvement Program.

The 0.50% statewide sales tax voters approved in 2012 and extended in perpetuity last November is funding the project. Tudor said the levy will eventually pay for passing lanes on 270 west from the bridge over Lake Hamilton to Y City.

"We couldn't have a better contractor for this job," Tudor said. "They do excellent work. They get in, and they get out as quickly as possible. While this is probably going to be a little difficult, lots of phone calls and people upset because construction is going on, they will make sure it's done as quickly as possible."

The widening was initially programmed for 3.65 miles, extending it west to the Lake Hamilton bridge, but ArDOT said in 2018 that funding limitations reduced the project's scope.

The state completed the acquisition of about 80 pieces of right of way in 2019. The shopping center at 3060 Albert Pike was one of the first pieces it condemned. The owners and state agreed in January 2019 to a $2.95 million price for the four shopping center parcels near the intersection. A court granted the state possession after the condemnation action was filed in January 2018. The owners subsequently challenged the state's initial $1.72 million offer.

ArDOT awarded Goolsby Inc. of Blytheville a $79,474 contract in 2019 to demolish the shopping center.

McGeorge General Manager Thomas Dickinson said the project includes a reconfiguration of the 270 west and 227 intersection.

"That's our first phase of the project," he said, noting construction will progress west from the intersection.

The city of Hot Springs awarded an $85,880 contract to Engineers Inc. in 2018 to relocate city utilities, as the expanded right of way for the project required the city to move its water and sewer lines.

The state awarded McGeorge the $78.5 million contract to widen 17.8 miles of Highway 70 east from Hot Springs to Interstate 30, a project also funded by the 0.50% sales tax. The widening was completed in 2018.

McGeorge won the $75.15 million contract to extend the King Expressway from the Highway 70 east interchange to the junction of highways 5 and 7 in Fountain Lake. Garland County contributed $30 million from the $54.6 million bond issue county voters authorized in a June 2016 special election.

"It should open up to traffic in the second quarter of next year," Dickinson said of the almost 6-mile extension through the rugged backcountry east of Hot Springs National Park. "We've done most of the earth moving. We're building bridges and putting asphalt down now." 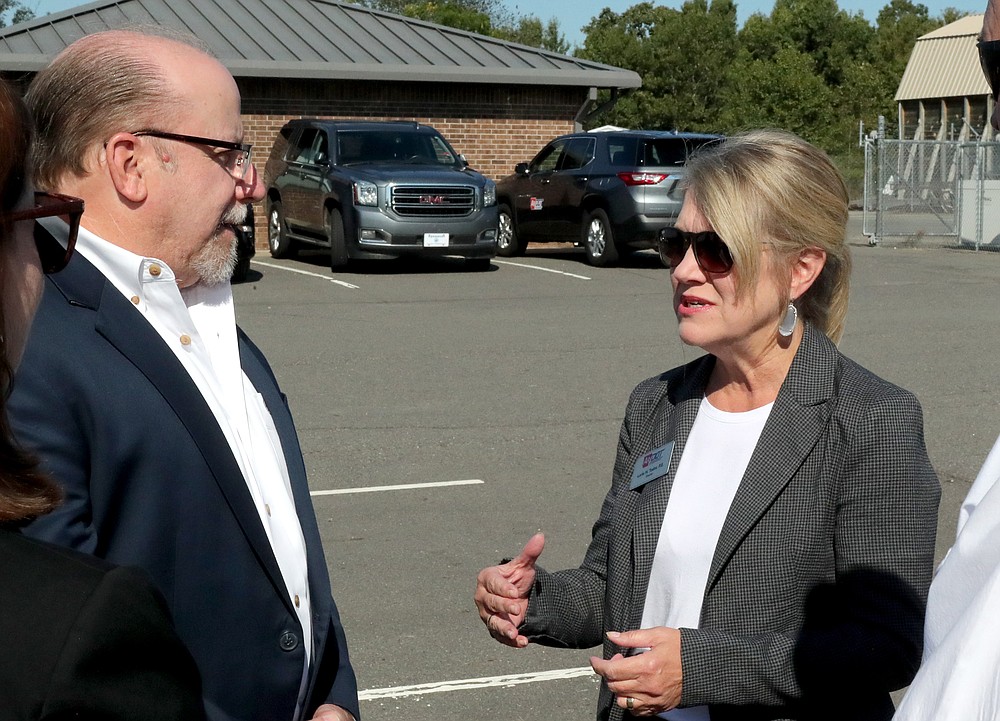