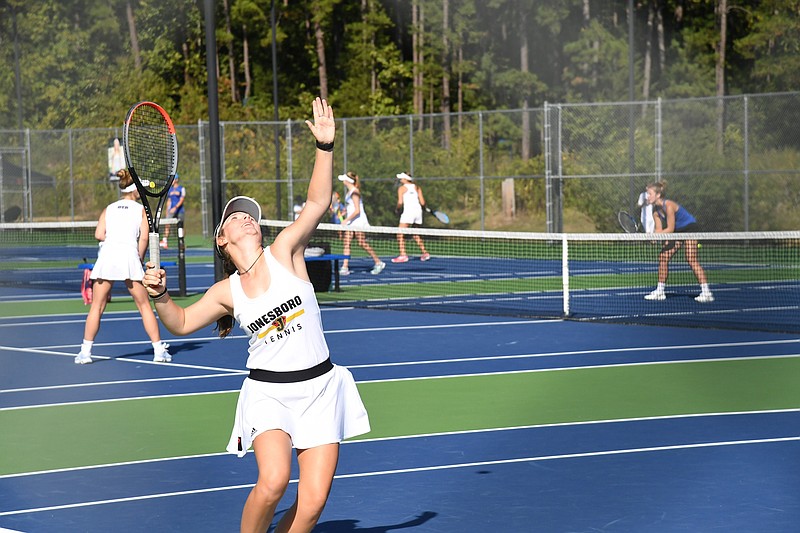 On her way to completing the four-peat, Payne beat Mountain Home's Macie Heide in the semifinals before a convincing win over Simmons.

"That is incredible," Payne said about her fourth consecutive state title. "I don't know a lot of people or really anybody that's done four years in a row. So we talked about pressure (Monday), and after that match it kind of hit me. I went to the ground seeing some stars, but I'm just over the moon. I just can't believe it happened."

The closest the Hurricane senior came to losing a single game in the match came in the final game of the second set. Simmons jumped out to a 40-15 lead, but Payne battled back to blank the sophomore.

Payne kept her focus and locked in by talking to herself and even smacking herself on the leg at different points throughout the match.

Coming into the tournament, Payne felt the weight of the expectations placed on her as she looked for a fourth straight state championship. Although it wasn't always easy for the senior, she got the job done in dominant fashion.

"I had about five meltdowns, not going to lie," she said. "I had to force myself to eat just because when you're that stressed everything kind of gets to you, and so I really had to just zone in every single point, every single match."

The senior showed visible emotion after big time rallies and points in the championship bout.

"Recently it's become a positive thing," she said. "I used to be a very negative player, and I think that nowadays self-talk is a really important part. Now I'm like, 'This point,' or 'Right here,' and stuff like that if I make a good shot then I can let myself say, 'Let's go.' I try not to do it every single point because the higher you go the harder you fall as well. My self-talk is just really stay in the moment, get ready for the next shot and really keep it positive."

Tuesday's play marked Payne's final appearance in the Class 5A State Tournament, and she added that there's a lot of good, young players following in her footsteps in the classification

Simmons happens to be one of those extremely promising talents. Just a sophomore, the young Lady Patriot competed hard in the championship match.

"I think that's definitely one of my best performances I've had in a long time," Payne said. "She's a great player. The score may not reflect it as much as it should. We had great points, we had long points, we had hard hitting points. I mean we threw everything at each other, and this time I came out on top."

After a tough loss, Simmons said she could learn from what she did wrong against Payne and apply it to winning a state championship next year.

"I did my hardest; I did my best," she said. "She's a great player, and we both fought really, really hard. I just ended coming up short."

The Parkview sophomore beat Siloam Springs' Olha Los in the semifinals to advance to the championship match.

"It's really exciting, it's just very exciting," Simmons said. "It's a blessing being out here. The only one in the Little Rock School District representing for the 5A and making it to the finals, it's a blessing."

Simmons also felt pressure heading into the state tournament after she made the finals last year against Payne.

"I feel like it was so much pressure because I made the finals last year," she said. "It's just a lot of pressure. You never know when you come out here because there's always new players each year. This year was way different than last year, there was more competition, harder players and I just prayed that I could get to the finals but you never really know but you can just hope that you get to the finals and I did so I'm proud of myself for that."

"I think one really good thing about our group is they're just mentally very strong," he said. "When things aren't going their way or whatever they keep their heads up and they're not very emotional which is key in big matches."

Looking toward the future, the Hurricane sit in a good spot to continue Class 5A dominance.

"Oh it's great," Morgan said. "It's good for the young ones to see what they can do in the future. You know there's a lot of pretty good players we have that aren't in our top six yet but they can see. A lot of them are here getting to watch so they're getting to see the success these girls have put in. So maybe for our future it's definitely going to help."