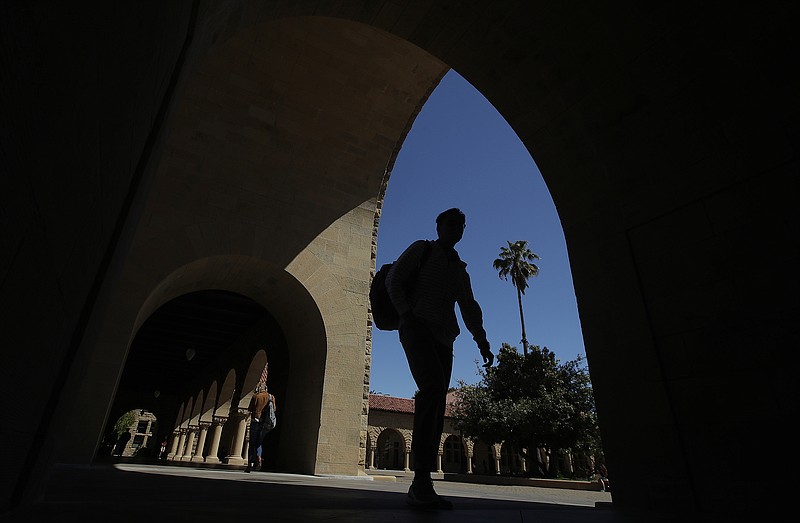 FILE - In this April 9, 2019, file photo, pedestrians walk on the campus at Stanford University in Stanford, Calif. Thousands of public servants who were rejected from a student loan forgiveness program will get their cases reviewed by the Education Department as part of a new settlement in a lawsuit brought by one of the nation's largest teachers unions. (AP Photo/Jeff Chiu, File)

Thousands of public servants who were rejected from a student loan forgiveness program will get their cases reviewed by the Education Department as part of a settlement in a lawsuit brought by one of the nation's largest teachers unions.

The settlement announced Wednesday aims to resolve a 2019 suit accusing the department of mismanaging its Public Service Loan Forgiveness program -- a troubled initiative that the agency is separately working to fix through an overhaul announced last week.

The suit was brought by the American Federation of Teachers on behalf of eight members who said they were wrongly denied debt cancellation through the program.

Created in 2007, the program promises that college graduates who take jobs in public service can have their federal student debt forgiven after making 10 years of monthly payments. But the vast majority of applicants have been rejected, often for failing to meet complicated eligibility rules.

According to the lawsuit, the Education Department routinely made errors while processing applications yet offered no appeals process. It argued that borrowers were illegally being denied their right to due process. The suit targeted the department and former Education Secretary Betsy DeVos.

As part of the settlement, the department said it will automatically review applications for all borrowers who were rejected prior to Nov. 1, 2020, as long as they had made 10 years of payments. If the department finds that a rejection was justified, it will email borrowers to explain the decision and how they can become eligible.

It goes a step further than a temporary expansion announced last week, which allows some previously ineligible borrowers to get loan forgiveness if they submit an application by the end of October 2022.

A new appeals process also will be created by April 30, 2022, for anyone whose application is denied. All eight plaintiffs in the suit will also get their loan balances erased, estimated at nearly $400,000.

Randi Weingarten, president of the AFT, called it a "game-changing victory" for educators, nurses and other public workers who were wrongly rejected.

"We just ensured that a promise made is a promise kept," Weingarten said in a call with reporters. "The settlement unravels the Gordian knot of PSLF's botched implementation."

Kelly Leon, a department spokesperson, said the Biden administration is committed to improving the program, which she said has failed to live up to its promise.

"We are pleased to settle this litigation and look forward to working with organizations including AFT to further improve the PSLF Program," she said in a statement.

Among the plaintiffs is Debbie Baker, an Oklahoma teacher who made 10 years of payments before learning she had a type of loan that isn't eligible under the program's rules. She will now get more than $80,000 in student debt erased.

"This is just lifechanging -- to be able to go to school and teach every day, and not have to deal with the anxiety and the anguish and the guilt and the feeling of just being trapped by debt," she told reporters. "This is truly, truly lifechanging."

Some other plaintiffs said their student loan servicers incorrectly told them they were eligible for the program, only to find out later that they had an ineligible loan or repayment plan. They also will see their loans cleared.

The department also agreed to email borrowers who may be eligible for loan forgiveness and explain how to submit the right paperwork.

The program has been a subject of debate for years amid criticism that it failed to deliver its promise to public servants. It was created to steer more college graduates into jobs that serve the public good but often have modest pay. It's open to government workers at all levels and employees of nonprofit groups.

After finding that most applications were being rejected, Congress added $700 million to the program and temporarily expanded its rules in 2018. But even after that change, just 1% of applications were approved, according to a federal report a year later.

Thousands of applicants have been denied because they had loans through a now-defunct program that gave federally backed student loans through banks. Those loans are ineligible under the program's original rules, as are some repayment plans.

Last week, the Education Department announced it will temporarily lift some rules to expand eligibility while it works on permanent improvements.

Under the change, past payments can be counted toward the required 10 years of payments even if they were made on loans or through payment plans that were previously ineligible. Borrowers have until Oct. 30, 2022, to get those payments counted.

The department is lifting the rules by invoking the HEROES Act of 2003, a federal law that allows the agency to waive certain rules during a national emergency. The move was applauded by Democrats and student advocates but blasted by Republicans, who say any changes should be made by Congress.

The Biden administration vowed to make permanent improvements through a federal rulemaking process. Hearings for that process started last week. 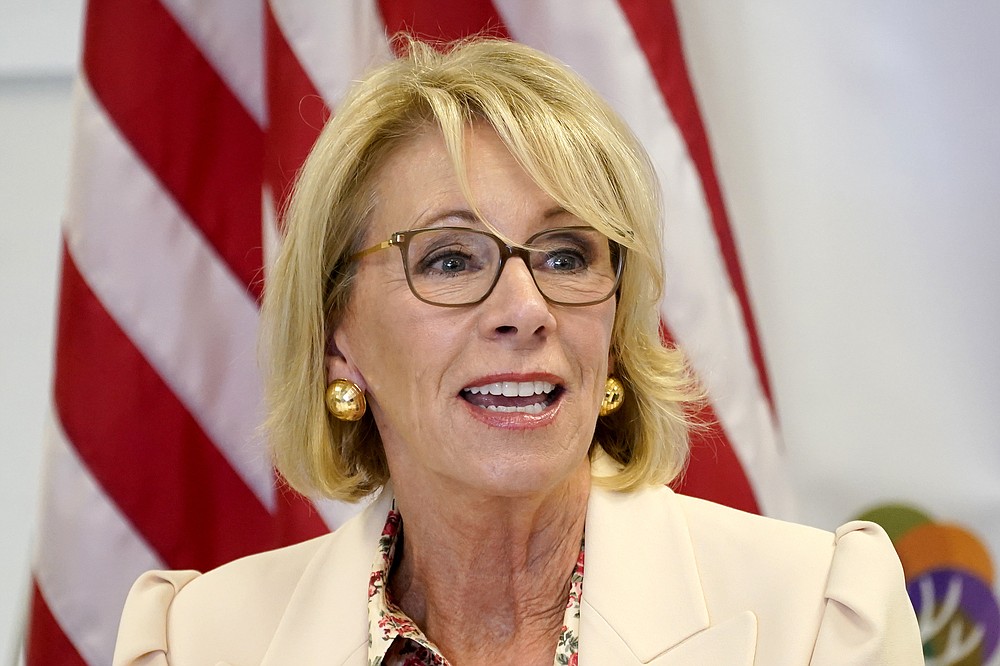 FILE - In this Oct. 15, 2020, file photo, Secretary of Education Betsy DeVos speaks at the Phoenix International Academy in Phoenix. Thousands of public servants who were rejected from a student loan forgiveness program will get their cases reviewed by the Education Department as part of a new settlement in a lawsuit brought by one of the nation's largest teachers unions. According to the lawsuit, the Education Department routinely made errors while processing applications, yet offered no appeals process. It argued that borrowers were illegally being denied their right to due process. The suit targeted the department and former Education Secretary Betsy DeVos. (AP Photo/Matt York, File)