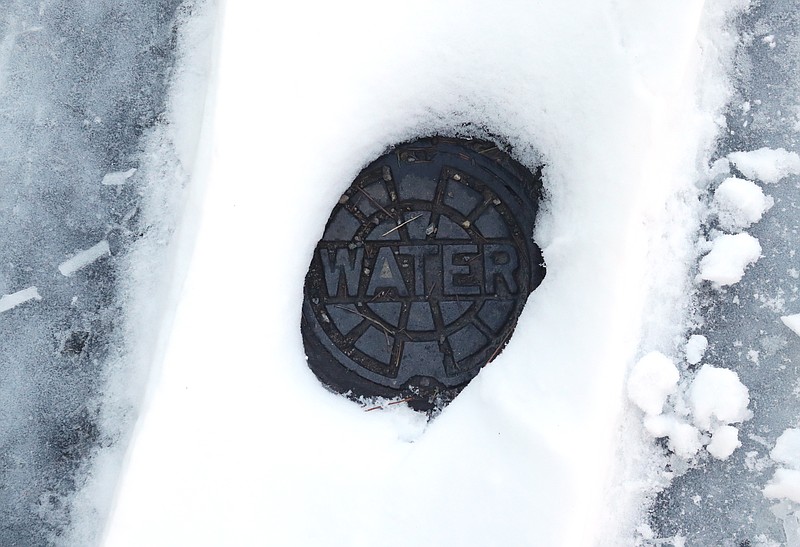 A waterline access cover on Ledgerwood Circle is surrounded by snow on Feb. 18. The service line warranty program the city endorsed offers ratepayers coverage for water and sewer service line repairs. - File photo by Richard Rasmussen of The Sentinel-Record

The city wants homeowners to help it guard against leaks in the water distribution system and keep stormwater out of the wastewater collection system.

Service lines on the customer side of water meters hemorrhaged tens of thousands of gallons an hour during February's winter storm. Temperatures stuck at or below freezing for six straight days broke thousands of accounts' service lines, dropping distribution system pressure to the point that the city considered a systemwide boil order.

Many service lines develop small cracks after being in the ground for decades. Pressure exerted by high service pumps at the Ouachita Water Treatment Plant and pump stations in the distribution system keeps ground contaminants from getting into the cracks.

The loss of thousands of gallons an hour on the customer side of meters stressed the cold-weather capacities of the regional water system's two treatment plants. They struggled to produce enough water to maintain pressure across the 145-square-mile service area.

The city wants to partner with the National League of Cities Service Line Warranty Program offered by HomeServe, giving homeowners the opportunity to buy coverage for their service lines. A resolution on the Hot Springs Board of Directors' Oct. 19 consent agenda allows HomeServe to use the city logo on its direct mail marketing, giving their service the endorsement of the city.

"They're asking for permission to send this out to all residents in the area," Utilities Director Monty Ledbetter told the board Tuesday.

Recent budget cycles have allocated millions of dollars to shoring up the city's side of the distribution system, but its responsibility ends at the meter. Ratepayers are responsible for what happens on their side of the meter.

"We know aging infrastructure is an issue plaguing communities all across the United States," Ashley Shiwarski, HomeServe's director of business development, told the board last month. "We know the city is doing their best to either operate or maintain their public infrastructure, but the homeowners' portion of these lines were kind of being forgotten about. Because there's only so much that the city can actually do on that private side."

HomeServe charges a $6.49 monthly premium for up to $8,500 of coverage per water line repair incident.

"For just a few dollars a month, they are able to transfer the risk of these lines onto us, a reputable company that is not only partnered with the National League of Cities but also the Arkansas Municipal League," Shiwarski told the board. "We dispatch a local, licensed plumber or contractor to do the repair. We would develop a specific contract or network to service your residents' claims. Ours is always on a per-incident basis, so we do not have a deductible or annual or lifetime limits."

An $8.49 monthly premium covers wastewater service lines. City Manager Bill Burrough told the board the wastewater collection system would benefit from the program, which could reduce infiltration and inflow of stormwater that arrives in large volumes at the Davidson Drive treatment plant during periods of prolonged, heavy rain.

The city's permit with the state Office of Environmental Quality allows it to discharge wastewater treated at the plant into upper Lake Catherine. Runoff entering the collection system last year threatened to overtop the plant's 70 million-gallon equalization basin, overwhelming the line that bypasses clarifiers and aeration basins that support biological processes that break down wastewater.

Sending rain-diluted flow from the equalization basin through the full treatment spectrum flushed out microorganisms that degrade wastewater. Many of the roughly 20 effluent violations the city reported to the state last year happened while the microorganisms were regenerating, a process the city said can take weeks.

The city has been working for more than a decade to get out from under the consent administrative order it entered into with OEQ for violating the Clean Water Act, issuing more than $70 million in ratepayer-secured debt to shore up the collection system and make improvements to the treatment plant.

The 2008 agreed order included a more than $100,000 fine for an excessive number of wet-weather overflows of manholes. The agreement protects the city from subsequent fines but obligates it to make improvements. The city has asked OEQ to extend the CAO while improvements are made in the Gulpha Basin and at the treatment plant.

The city said earlier this year that rate increases will be needed to finance the improvements.

"(The service line protection program) would benefit the private side of the line versus the city side of the line," Burrough told the board last month. "If we are to really have an impact on (inflow and infiltration) in the system for wastewater, that's one of the things we'll probably have to look at in the future. Something like this would be very beneficial."

The $8.49 monthly premium provides up to $8,500 of coverage per repair incident.

"A broken, cracked or leaking pipe, a tree root issue, a clog that needs cleared out, anything that would impede the flow of their line, they could make a quick call." Shiwarski told the board. "We dispatch a plumber, and the plumber bills us directly."

For $9.99 a month, HomeServe offers up to $3,000 of coverage per repair incident for interior plumbing and drainage.

A royalty marketing agreement would pay the city 50 cents per month for each warranty contract HomeServe sells. If a homeowner opted for the water, wastewater and interior coverage, the city would get $1.50 a month, money the city said will go to the utility assistance fund Cooperative Christian Ministries and Clinic administers on the city's behalf.

"We do the marketing, the billing, the claims management and customer service," she told the board. "There's absolutely no cost to the city, and the city would receive an incremental revenue stream for their participation."

"Even if someone doesn't enroll in the program, at least in the future they're well aware of what their service line responsibility is and that the city tried to take a proactive approach in helping to educate them."