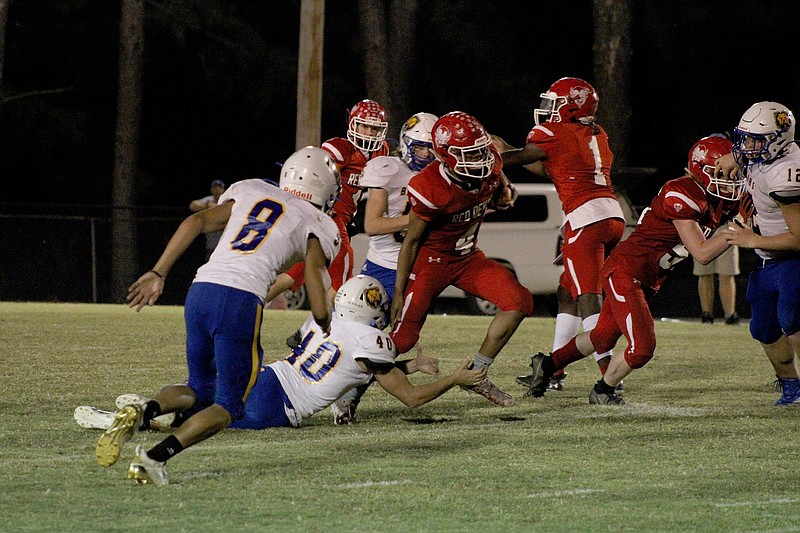 Mountain Pine's Keelan Dobbins (4) breaks through on a run during last Friday's game against Spring Hill at Stanley May Field. The Red Devils travel to Strong Friday to take on the Bulldogs. - Photo by James Leigh of The Sentinel-Record

This week, the Red Devils (4-2, 3-0 South) play host to Strong-Huttig (4-0, 2-0), a team that took a 14-6 win over Episcopal Collegiate earlier this season. Mountain Pine head coach Sam Counce said that this week's contest will likely be the game that decides the conference championship.

"You know, because it's Hermitage and Cutter (Morning Star) next, I figured this will be for the conference championship this week," he said. "And they're good. ... They've played well. They've got some, they've got some athletes. They'll remind you a little bit of Marvell, but they're better. They, they run around back there and throw it. They've got a big No. 1 that can come down with it, so we've got to do some things a little different on defense this week. First of all, we've got to tackle, and we're gonna try to move around a little bit and kind of get them guessing and open up some gaps so that we can kind of make the quarterback be a little uncomfortable."

Counce said Friday night that the team would be working on tackling this week, and after reading the quote over the weekend, one of the players asked if that was the plan for the week.

"Monday, Andrew Goodin said, 'Coach, are we going to work on tackling like you said in the paper?' I said, 'We sure are,'" he recounted with a laugh.

The team focused on tackling drills early this week in order to make sure they are ready for the Bulldogs.

"Whenever we play the same kids on both sides of the ball, I think sometimes our focus drops a little bit or our effort -- one or the other," Counce said. "But we worked hard on tackling this week. Monday and Tuesday we put in four different drills that we did as far as angle tackling and one-on-one tackling and just trying to get our kids to understand, you know, the physicality of a game. You know sometimes if we get away from it, they forget to be physical on the defensive side of the ball. And this week we tried to remind them of how to be physical on defense."

Counce said that he feels that one of the reasons the Red Devils had more success offensively last week was because of the players that Spring Hill put on their offense.

"I felt like that Spring Hill had ... their more athletic kids or better skill kids on offense to score against us, and I felt like they've had a different eight going on defense, and that's maybe why we were as successful as we were, probably, moving the ball," he said. "But they were good on offense. You know, for us we have about six to seven whenever it goes offensive plays, and when it goes to defense the same six or seven, we just add one or two guys, and you know, we play the same people, and that's what makes it tough for us on defense sometimes. But I think they purposely had their better players on offense to get the ball out to No. 4. And they did a good job; they were tough to stop."

The Bulldogs are a tough team, Counce said, and he said with the possibility of rain for Friday night, it might be problematic.

"We've watched them on film, and they've handled these teams," he said. "You know, Episcopal beat us pretty good, and they beat Episcopal, but it was in the rain and mud , a pretty good rainstorm about a month ago. So, you know, it kind of was a mud pit, and that could be the case this weekend, too. We do have a chance of rain, and and we're kind of preparing for that, too, to get down there and it be a soft field."

"I expect them to try to get the ball to No. 1 as far as throwing it to him," he said. "They're gonna throw it a lot more, I mean, than we're probably used to seeing in a team. ... They try to get it to him, and also they'll run the speed. They'll run a speed option where they take a kid across the grain there and hand it off to him to take advantage of their quickness. And they want to get you on the corner; they want to get you out in open field, so they can out-athlete you. And that's one of the reasons too we've worked so much on defense this week -- our tackling and things -- because it's gonna be tackling in space a lot. And that's one of the hardest things, you know, for a football player to do is get out there with an athlete and tackle them in space."

Kickoff at Jerry Burson Field is set for 6 p.m.